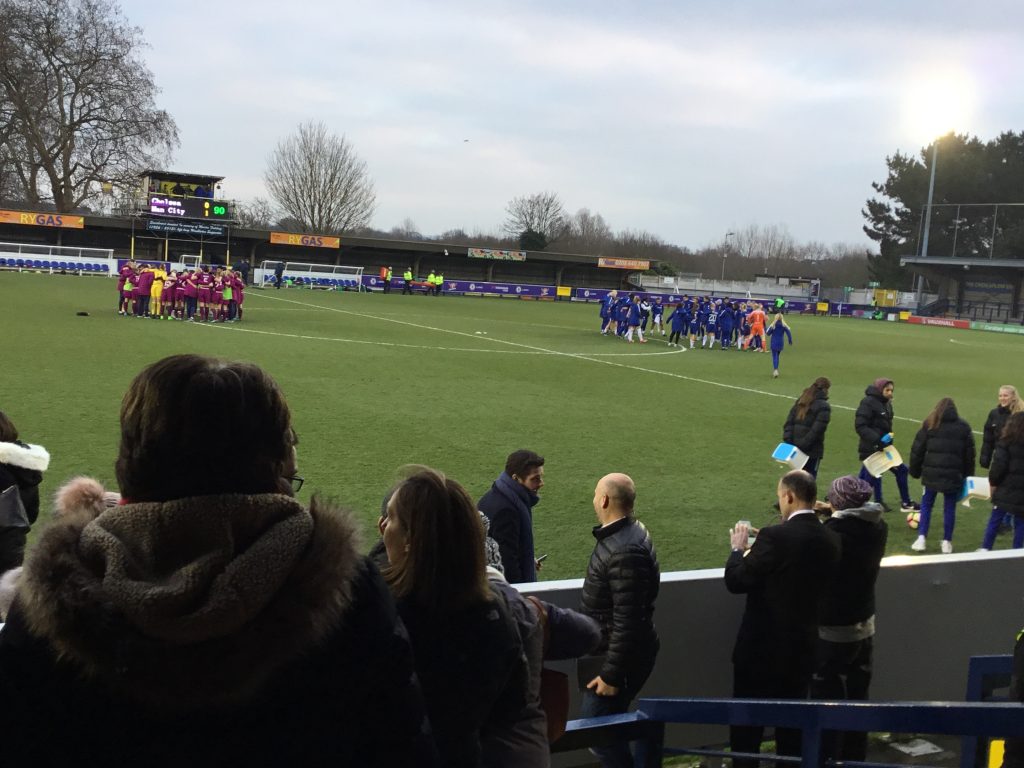 Chelsea’s unbeaten run of domestic matches ended in disappointment this afternoon, as the Blues lost 1-0 to arch rivals Manchester City in the semi-final of the Continental Tyres Cup.

The home side never really got out of first gear. And while the performance was similar to last week’s WSL 1 3-2 league wi against arsenal, it was not enough against a far more competent outfit.

Quite how Mille Bright, a centre-back pushed up to attack missed the simplest of chances to tuck home the equaliser on 90 minutes is anyone’s guess. But she somehow cleared the ball rather than score.
This added to two cleared off the line by City would suggest the Londoners were unlucky. But in truth, all over the pitch, the visitors had the upper hand.The fist effort on goal, of sorts, came from the boot of Fran Kirby ion three minutes. but her right-footer was well wide of Karen Barnsley’s goal.

However the opening exchanges generally were one that surrounded players trying tom herb the better of their nearest opponents.

A kick off the line by Steph Houghton thwarted Kirby on 18 minutes and seconds later the home side were undone, when a quick City break saw them go behind. A simple tuck home by Nadia Nadia from six yards went straight past Hedvig Lindahl after good work by Jill Scott set her up.
Chelsea forged attacks as they attempted to level the game game, Ramona Bachmann, on and Ji So-Yun got close.
Lindahl was quick off they mark, as sloppy play by Chelsea allowed Nadia a run on goal, but the goalkeeper was quickly out to block the effort.

Neither side made a change at half-time, but City resumed their dominance of possession. Nikita Parris curled the ball over the Chelsea crossbar as the visitors went form what would seem the knockout blow.
Emma Hayes had seen enough and replaced wing back Maria Thorisdittir with Jonna Andersson on 60 minutes.
Her impact was instant as she cut the City defence apart on the left, sending in the perfect byline cross. Hannah Blundell was at the far post and let fly with a blistering shot which Karen Bardsley reacted brilliantly to to clear the ball for a corner.

With Drew Spence and Erin Cuthbert on for the Blues, Chelsea entered the final 10 minutes hoping the extra pace of the duo would open up the resolute City defence.
But despite the late rally, Chelsea fell short of the requirement to get to the final.