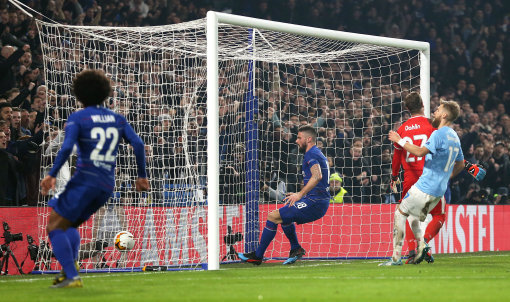 Chelsea are into the last 16 of the Europa League following their 3-0 win at the Bridge against Malmo FF tonight, but will head coach Maurizio Sarri still be in charge in two weeks’ time when the tournament resumes.

The odds are stacked against the Italian with next week appearing to be the time, the club decides to end with his services.

Goals from Olivier Giroud, a classy free kick from Ross Barkley and a low drive from Callum Hudsob-Odoi was enough to see off the Swedish side, who for periods of the game, in particular the first half, were dominant.

The 5-1 aggregate scoreline was just given the difference in individual talent on show, yet the home side played with a lack of confidence which reflects their recent poor form.

It’s Manchester City and Spurs next up for the Blues – City in the EFL Cup final at Wembley on Sunday, and a visit by the north Londoners in the Premier league on Wednesday.

Four minutes in and Chelsea had a scare when Rasmussen Bengtsson saw his glancing header from eight yards out, inch past Willy Caballero’s right post.

Chelsea responded in Kline with a quick break away which saw Callum Hudson-Odoi cut free, pass to N’Golo Kante who whipped over a great right byline cross for Olivier Giroud. Like Bengtsson, his header zipped just widen of Johan Dahlin’s left post.

Chelsea were almost the architects of their own downfall on 12 minutes when Hudson-Odoi gave the ball away to Markus Rosenberg on the edge of the Chelsea  penalty area. The striker cut past Antonio Rudiger, but his left footed daisy-cutter went wide of goal.

Dahlin kicked the ball away from a Cesar Azpilicueta goal-bound touch on 32 minutes. Willian had done well to slip is right byline pass to the in-running full-back.

Ross Barkley had a shot on goal with six minutes of the first half remaining. But his long-ranger effort failed to trouble Dahlin.

There were no changes to either side at half-time.

Thankfully, the tedium was finally expunged on 55 minutes and the home side went ahead. Kante picked the ball up on the half-way line, raced 30 yards forward before passing to his left to Willian. The Brazilian took two touches before sending across a deft left-footer which Giroud gleefully tucked home from close range.

Malmo’s Bengtsson got a second yellow card and a red on 74 minutes as the tie move further away for the Swedes as bizarrely swept home a wonderful free-knock from just outside the visitors’ penalty area.

Three minutes later and Hudson-Odoi latched onto a cross-field ball from Willian before driving home from a tight angle to make it 3-0.