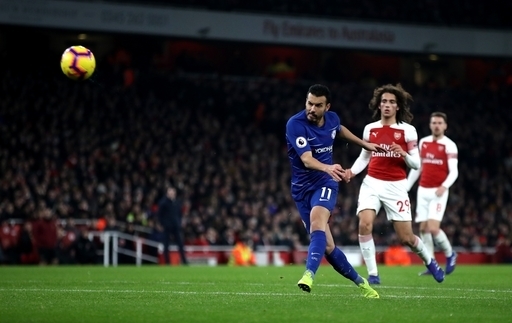 Chelsea’s grip on their Champions League place took a massive hit this evening as they were shot down 2-0 by the Gunners at the Emirates Stadium.

The Blues failed to register a shot on target – Marcos Alonso’s clipped header on the stroke of half-time the closest they got.

By then, the west Londoners’ were 2-0 down. The Blues are still fourth but Arsenal are now just three points behind them alongside a resurgent Manchester United.

The need for a goalscoring striker – Gonzalo Huguain – cannot come too quickly and if a deal is struck early next week, he could face Spurs in the Carabao Cup semi-final at Stamford Bridge on Thursday.

Had the home side hit six, the travelling Chelsea fans. Who it must be said, appeared to behave impeccably would not have disagreed.

Quite how Arsenal’s Pierre-Emerick Aubameyang missed a sitter on four minutes is anyone’s guess. The striker had the simplest of tap-ins, from close range after Alexander Lacazette beat the offside trap and Alonso to cut in the perfect right byline cross.

But the striker totally misread the low ball and let it slip under his foot as he attempted to strike it.

A powerful header by Sokratis five minutes later from a corner was marginally less difficult, but nonetheless a golden opportunity as he out jumped Antonio Rudiger at the far post but screwed his header wide of goal.

Eden Hazard had the Blues first effort on nine minutes but scuffed his right-footer wide.

Arsenal’s deserved pressure paid off – and it was a spectacular strike by Lacazette.

The Blues failed to deal with a simple, short corner after 14 minutes. The ball fell to the France striker. He got past Pedro, then Alonso before striking an unstoppable right footer from an angle past Arrizabalaga.

Aubameyang could have doubled the lead two minutes later – a mazy run on the left saw a shot well saved by Arrizabalaga.

Seconds later and Pedro should have repeated his lofted goal from last week against Newcastle, when he again latched onto a long ball by David Luiz. But this time the Spain midfielder clipped his lob, just wide of the empty Arsenal net.

The Blues finally found themselves with some playing time with the ball, but failed to trouble the Arsenal rearguard – A Jorginho shot from long range zipped high over Bernd Leno’s crossbar.

An acrobatic Aubameyang bicycle almost reaped dividends with eight minutes left on the clock, but the ball inched wide of Kepa’s goal.

But they got their rewards on 39 minutes, when a dink into the Chelsea’s six-yard box hit the shoulder of Laurent Koscielny and looped into the back of Kepa’s net.

Alonso hit the post with a strong header from a Willian corner on the stroke of half-time.

There were no changes by either side during the break.

Chelsea started the second-half brighter but still found a stuttering Arsenal rearguard too strong for them and it was relatively easy to hack  the ball clear when required.

Maurizio Sarri decided that possession without an end product wasn’t enough and opted to bring on Ross Barkley for Mateo Kovacic.

This change signalled an Arsenal revival and they went close several times.

Hector Bellerin was then carried off with an serious-looking  injury and replaced by Mohamed Elneny with 18 minutes left.

Chelsea’s final throw of the dice came on 80 minutes when Sarri thrust Callum Hudson-Odoi into the fray – predictably Pedro made way.

There was no dramatic change of fortune and the home side comfortably saw off the remaining minutes.