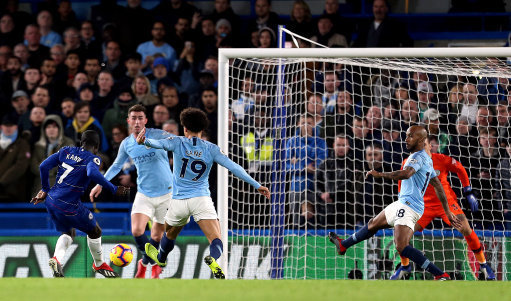 N’Gola Kante scored a sensational thumping goal on the stroke of half time that sent previously undefeated Manchester City into their shells for the second half as the Blues went on to record a morale-booster 2-0 win over the Premier League champions with David Luiz glancing home the perfect header from a corner.

It was all doom and gloom around Stamford Bridge before this encounter as the Blues were dumped in midweek by Wolves.

Tab the start of the early evening kick-off, Chelsea weer in fifth place – at the end, they had jumped to third, leaving Liverpool topi of the league.

Maurizio Sarri opted to drop his striker’s Alvaro Morata and Olivier Giroud and play a false nine in the shape of Eden Hazard.

It was a massive gamble by Sarri but his players responded with a gut-busting opening 45 minutes that absorbed the attacking finesse from City – but at the same time restricting their attacking options.

That said the visitors dominated possession and were a tad unlucky not to have snatched the lead.

That came from the right boot of Kante.

The second half saw the Blues resurgent in collective confidence, while City were a pale shadow of themselves.

Raheem Sterling had the first effort on goal, after Jorginho lost the ball in midfield. Luckily for the home side, his left-footed effort from eight-yards out was weak and Kepa Arrizabalaga easily smothered the ball.

City totally dominated the opening exchanges in terms of possession, forcing the Blues deep into their own half.

Sensationally and totally against the run of play, Chelsea countered on 45 minutes.

The ball fell to Willian, then out to Alonso. He passed to hazard who, just in sides the City penalty area, slid the ball across the box. In-running N’Golo Kante then smashed in a beauty of a right-footer that arrowed past Ederson and smashed into the top right hand corner of his net.

There was no change from either side at half-time.

Chelsea bound by the lead, started the second half on the front foot. A stunning free-kick by Willian, 20 yards out, three minutes after the restart, almost doubled the score but Ederson dived to his left and managed to parry the ball away from goal.

Willian had another effort from a Chelsea counter-attack – but again, it was a weak shot which Edmerson snaffled.

City boss Pep Guardiola has seen enough and chose to make his first substitution, bringing on Gabriel Jesus for Sane.

Injured David Silva was replaced by  Ilkay Gundogan on 68 minutes.

Willian was taken off and Ruben Loftus-Cheek entered the fray on 75 minutes.

The Brazilian was nit happy with it, seemingly asking ‘Why’ to the bench as he sat down in the dugout.

The response was almost immediate – a regulation corner from Pedro, saw David Luiz glance a beautiful header into the far corner of Emerson’s net as the home side fans went into delirium as Chelsea went 2-0 up.

This was a deserved victory for Chelsea – a tactical gamble by Sarri, certainly – a renewed desire from the players who now have to translate that performance into when they are playing less powerful opposition.