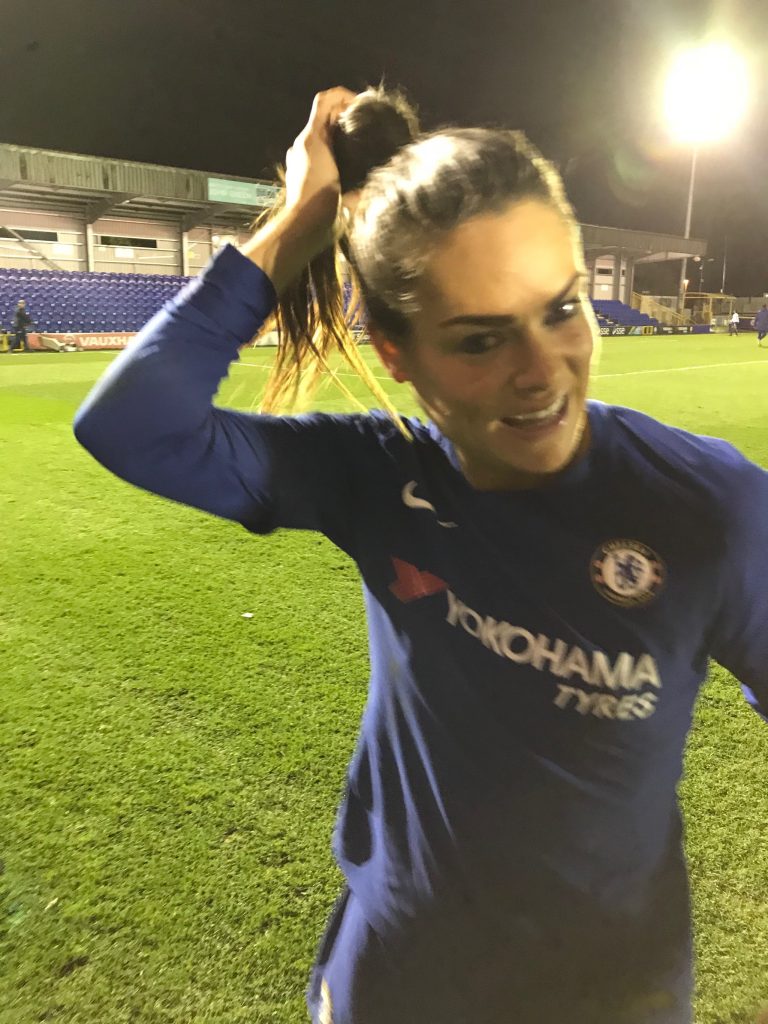 Chelsea cruised to victory over Spurs tonight at Kingsmeadow as they thrashed the north Londoners 4-1 in the final group match of their Continental Tyres Cup campaign.

Emma Hayes, the Blues manager had the luxury of resting players ahead of the tumultuous clash on Sunday in the WSL 1 when Manchester City come calling to South-west London.
This game was also a celebration for left-back Claire Rafferty’a 10-year tenure at Chelsea and she was made skipper for the night.
Goals from Hannah Blundell, a brace from Fran Kirby and a simple drive by Drew Spence from close range was more than enough to overwhelm a young, Spurs side.
The visitors got their goal after a horror clearance from reserve stopper Becky Spencer allowed substitute Lauren Pickett to slide home a consolation.

Drew Spence had the first chance of the night, slicing a low drive from the edge of the Spurs penalty area after excellent set up play by Fran Kirby on four minutes.
Kirby should have put the Blues 1-0 up five minutes later when she was set clear with just the Spurs goalkeeper to beat but she shot directly at the body of Toni-Anne Wayne.
A thumping 25-yarder by Erin Cuthbert crashed onto the Spurs crossbar and over the stand, on 15 minutes, as the Blues dominated possession and wasted chances, with the visitors clinging on by their skin of their teeth.
It was the side netting for Hannah Blundell after Gemma Davison cut the Spurs defence to ribbons on 21 minutes.
The occasional foray by the Whites gave the Blues some discomfort but not enough to threaten the goal.
Inevitably Chelsea took the lead on 24 minutes when a Blundell blockbuster on the edge of the penalty area was too hot for Wayne to handle, and, while the stopper got a hand to the ball, it continued on its way and nestled in the back of the net.
Kirby missed again just before the half hour as she sliced a smart left-footer wide of Wayne, but also just wide of the goal.
Kirby got the goal her efforts demanded two minutes before the break. Sublime one-touch football ended up with Kirby, slotting home cooly with her right-foot, leaving Wayne flat-footed.
The second half was much of the same as the first as the gulf in footballing class was clear to see.
The endeavour of the visitors was not in question, but for the most part, they were chasing shadows as Chelsea attacked at will.

Number three soon followed, and once again the approach play by the Blues was impeccable, and Drew Spence teed up Kirby for her second as she rammed home from close range on 56 minutes.
On 64 minutes a calamity clearance by Chelsea goalkeeper Spencer in goal, allowed substitute Lauren Pickett the simplest of chances to tap the ball home.
A rasping 25 yarder by Maren Mjelde smacked off the Spurs crossbar and dropped agonisingly, for her, on the wrong side of the goal line and was eagerly cleared. The ball rattled the woodwork again two minutes later on 68 minutes, this time, Ramona Bachman saw her effort denied the goal the technique deserved.
Crystal Dunn replaced Bachman with 16 minutes of the match left. Kirby’s work was done two minutes later, J So-Yun came on.
Within seconds, Spence finished off an excellent run by Cuthbert,. she angling her low drive well wide of Wayne.