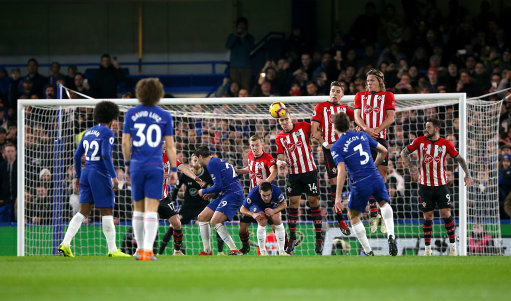 Chelsea are looking over their shoulder at Arsenal and Manchester United after a dour, drab and frankly inept display at Stamford Bridge tonight as the Blues could only draw 0-0 to relegation-haunted Southampton.

There were justified boos from the frustrated fans at the end.

Chelsea have 44 points but Arsenal are only three points behind, with United six.

Southampton were defensive, they were functional, and they could not be bothered to attack.

A late rally failed to dent the saints defence with goalkeeper Angus Gunn in good form.

A great ball by Eden Hazard on four minutes opened up the Saints defence with Willian racing through to latch onto the ball.

Luckily for the visitors goalkeeper Angus Gunn was quick off the line to thwart the Brazilian.

Alvaro Morata, starting for the first time since Budapest in mid-December had ab great chance on 13 minutes, latching onto Cesar Azpilicueta’ deft cross. But the header wasn’t powerful enough to trouble Gunn.

Gunn was at it again on 34 minutes, getting his head to a Hazard left-footer after Antonio Rudiger bisected the Saints defence.

The goalkeeper didn’t know what hit him, but it kept them in the game.

Willian limped off the pitch with nine minutes of the half left following a clattering from Maya Yoshida. Ruben Loftus-Cheek replaced him.

The second half, was much the same as the first, lots of Chelsea possession with next to no output.

Hazard tried his best on 58 minutes to break the deadlock, but his mazy run and shoot was parried away by Gunn for a corner.

Ex-Chelsea midfielder Oriol Romeu saw a low, left-footer arrow towards goal, by Kepa was equal to the task, smothering the effort.

Maurizio Sarri decided that there needed to be a change and opted to bring on Cesc Fabregas for ineffectual Ross Barkley on 69 minutes.

Morata did put the ball in the back of the net, but was adjudged to have strayed offside at the last moment.

The Spain striker then had a great chance on 77 minutes but after being set up by Loftus-Cheek, he could only powderpuff a left footer straight to Gunn.

Two long range efforts from Alonso, were not enough.

Next up for the Blues is the FA Cup tie, at the Bridge against Nottingham Forest on Saturday.