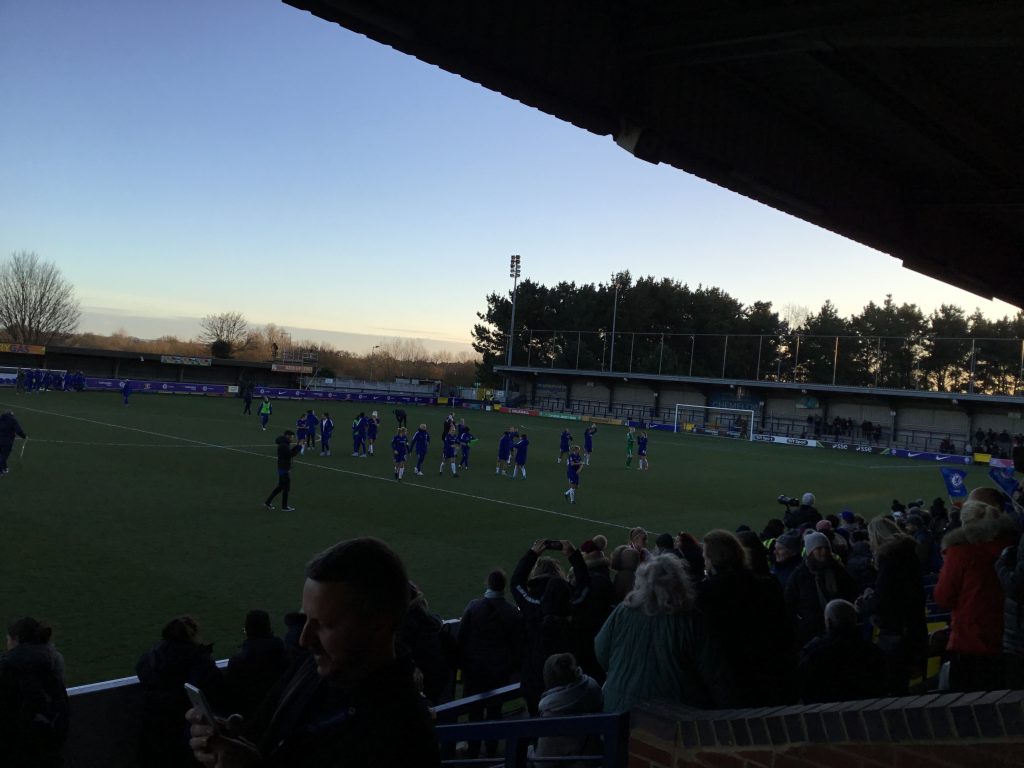 Chelsea overcame a strong Arsenal side 3-2 this afternoon as the Blues went top of the WSL 1 league, albeit for a couple of hours, despite giving their poorest performance of the season
Goals from Maren Mjelde, Ji So-Yun and a late own goal by goalkeeper Sari Van Veenedal saw the Blues keep their unbeaten record in front of a record 2,570 crowd at their Kingsmeadow Stadium.
Manchester City can retake ownership of the league with a win over Reading later today.
The Christmas break certainly did not help the Blues, who looked tired, but their experience saw them through in the end. A bit off luck helped.

It was a tentative start by the Blues, with the opposition content to sit back, allow Chelsea to retain possession.

They were more than happy to break on the counter-attack.
Ji So-Yun however forced the first save of the game on six minutes when she danced through the Arsenal rear guard and let fly with a firm left-footer. Sari van Veenedal, got down low to thwart the midfielder.
Neither side’s defence looked comfortable in the opening stages, and Fran Kirby should have put the Blues ahead on 10 minutes, but she scuffed her shot, allowing Van Veenedal to hack the ball clear. Ramona Bachmann’s forceful run and shot saw the ball go straight to the goalkeeper’s midriff as the home side went in search of the goal.
Veenedal was soon in action again, thwarting Ji So-Yun.
But it was Arsenal who rattled the Chelsea.crossbar on one of their quick breaks, Vivienne Miedema scooping the ball over Hedvig Lindahl from eight yards out but seeing the it rebound off the woodwork.
Despite Arsenal’s threat on the break, it was Maren Mjelde who opened the scoring on 25 minutes following a free-kick that saw the ball pinball in the Arsenal six-yard box, twice hit the upright, before Mjelde tucked home. There were no changes at half-time by either side.
The Blues looked tired and lacklustre from as soon as the whistle was blown – playing against a strong wind certainly stifled their game.
Some terrible defending by the Blues saw their lead evaporate 10 minutes after the restart with Miedema slotting home from close range.
The Blues lead was restored within five minutes. A sharp break by Kirby eventually saw the ball fed to So-Yun who smashed the ball goal-bound. There was a question mark if the ball had crossed the line but the ref  gave the goal.
But the inability of the Blues to defend was cruelly exposed when yet again sloppy defending saw the north Londoners equalise on 63 minutes, when Dominique Janssen tucked home from close range.
A brilliant save by Van Veenedal stopped Mjelde scoring her second as she danced through the Arsenal defence on 70 minutes. The Arsenal stopper stood up strong and managed to parry the ball away for a corner.
Sensationally, with eight minutes on the clock, the Blues retook the lead through a break of their own. Debutant Jonna Andersson, on the left byline cut the ball across goal and the unfortunate Van Veenedal, up to that point unflappable, knocked the ball over her own goal line.