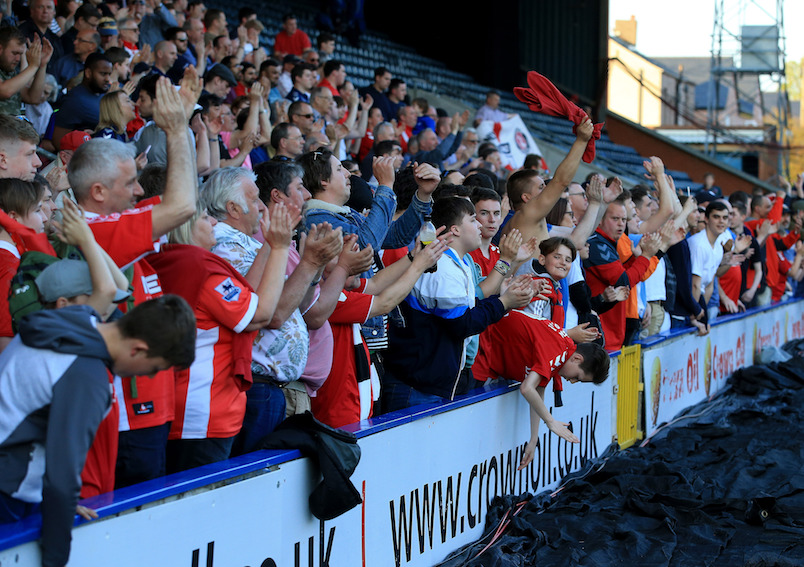 Things didn’t work out exactly as expected but both sides ended up satisfied with how they panned out at the Crown Oil Arena. Even the losers could console themselves by feeling that this was a job adequately done.

Given a huge boost by neighbourly Gillingham, who torpedoed Plymouth’s last lingering hopes of a League One play-off spot by clobbering the Pilgrims 5-2 at Priestfield, Charlton’s 1-0 defeat at the hands of relegation-threatened Rochdale became almost academic. Hardly encouraging for the upcoming play-offs but meaningless as part of the bigger picture.

That’s academic and meaningless from the Addicks’ narrow point of view, it must be said, because this result was the biggest of deals for Dale, who clung to their League One status by overhauling Oldham. The Latics started the day a point better off than their rivals but were held to a 2-2 draw at already relegated Northampton.

Celebrations were long and heartfelt at the Crown Oil Arena as the permutation of inter-linked results brought huge relief to Keith Hill’s never-say-die side.

Beaten Charlton, on the other hand, backed into a play-off semi-final against Shrewsbury Town, themselves 1-0 losers at Milton Keynes Dons, another relegated team with mischief on their minds. The first leg is at The Valley on Thursday, with the tie to be settled in Shropshire on Sunday.

It was always a long shot that a combination of a Plymouth win coupled with a Charlton loss – with a consequent six-or-seven goal swing in favour of Argyle – would deny the Addicks their place in the post-season shoot-out.

As it turned out, the Pilgrims were broken by their crucial 2-0 loss to Scunthorpe in midweek. Gillingham callously mopped up the leavings. And the more complacent their visitors became as the comforting news from distant Kent filtered through, the more inevitable Rochdale’s victory seemed.

With an eye on the imminent play-offs, Lee Bowyer’s attitude was a mixture of caution and common sense, his pressing priority the completion of the regular season without further injuries or mishaps. His team selection betrayed a sense that this tough assignment against a side battling for their lives was one game too many for comfort. Understandably low-key, Charlton were perfect opposition for desperate Dale, who had no intention of looking gift horses in the mouth.

Faced with the tricky task of balancing enterprise and prudence, Bowyer made three changes to the side which virtually clinched their play-off slot by beating Blackburn Rovers 1-0 at the end of April.

In came Jay Dasilva to fill in for gashed-knee victim Lewis Page, with Sullay Kaikai and Michal Zyro stepping in ineffectually for Ben Reeves and Josh Magennis respectively.

Still without the mercurial talents of hamstrung Tarique Fosu up front and with Nicky Ajose an unexplained absentee from the squad, Charlton’s attacking options were, to say the least, tissue thin.

Rarely capable of more than a goal per game, they have been indebted recently to several strokes of good luck in maintaining even that modest average. Goals at Bristol Rovers (Reeves), Shewsbury (Magennis) and at home to Blackburn (Jason Pearce) have been favoured by fortune. Nothing wrong with that, of course, but luck has a nasty habit of changing sides.

Chances for Charlton were rare at Spotland, where the hosts’ urgent pressing tactics congested space and harried them into errors.

Wedded to sharp, one-touch passing, the Addicks struggled to break loose and impose themselves. A couple of waspish shots from Jake Forster-Caskey, one of which extended Josh Lillis while the second whizzed narrowly wide, were poor return for their neat but often laborious approach play.

The impression grew that the visitors could have spent the weekend earnestly trying but miserably failing to score. And that’s a return to a familiar theme.

Hill’s nuggety side, by contrast, were direct, uncomplicated but looked equally unlikely to score until sturdy Joseph Thompson relieved Oliver Rathbone midway through the second half. They had at least forced a handful of saves from Ben Amos, the most notable of them a full-length sprawl to reach Callum Camps fizzing low snapshot at the second attempt. But Thompson changed all that two minutes after his introduction. Turning sharply in the penalty area, he punished indecisive defending with a crisp, left-footed drive which beat Amos on its way into the bottom right corner. It was the first goal conceded by the outstanding keeper in over 330 minutes and proved enough to resolve this anonymous encounter to Rochdale’s satisfaction.

Only a churl would grudge the locals their unbounded joy at escaping the drop.

For their part, Charlton looked relieved to have completed this inconvenient chore without further casualties, though Pearce caused alarm by limping temporarily following a couple of heavy challenges.

Of equal concern was the frequency with which the skipper, among others, slipped on a subtly watered playing surface.

Bowyer might want to explore the use of a farrier and blacksmith to ensure that his players are suitably shod for the prevailing going. The gruesome memory of Patrick Bauer’s fatal slip which gifted Wimbledon victory is still raw.

Shame if it cost Charlton again, this time with the Championship’s promised land in clear sight.