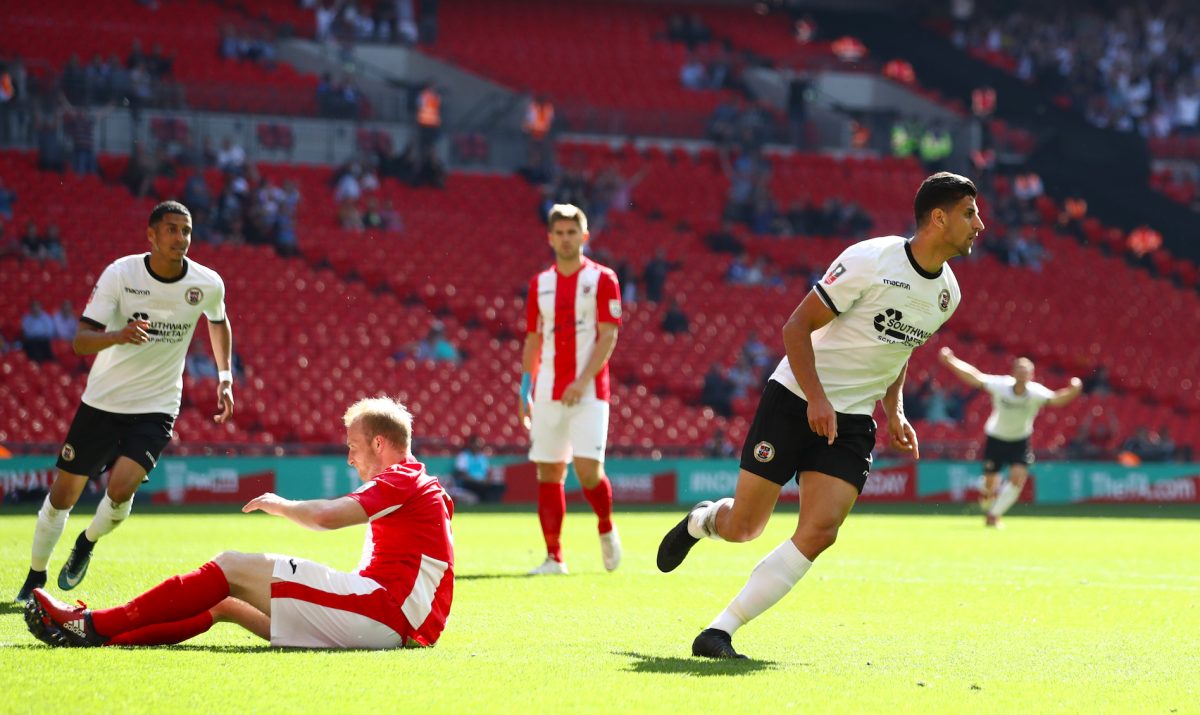 Bromley suffered FA Trophy final heartache as they were beaten on penalties by Brackley Town at Wembley Stadium.

Omar Bugiel’s first-half strike seemed to have been enough to seal victory for Bromley. But a 95th-minute own-goal from defender Roger Johnson meant the tie was taken into extra-time, and then onto penalties.

Bugiel missed a decisive penalty that would have decided the tie in the Lillywhites’ favour before Jack Holland’s effort against the post provided Andy Brown with the chance to win it for the Saints – and he made no mistake.

The Hayes Lane side, making their first visit to the national stadium since a 1-0 Amateur Cup Final win over Romford in 1949, were backed by roughly 18,000 supporters who travelled to north London to roar their local non-league side on – but were left to head home disappointed.

Neil Smith’s South Londoners nearly edged ahead in the opening minutes. Former Charlton man Johnson headed a deep free-kick back across goal, with George Porter nodding over from close-range – although the flag was up.

Ravens skipper Jack Holland stood firm to block Brackley’s Matt Lowe’s shot at the other end as the National League North outfit looked to gain a footing in the early stages of the contest.

Forest Green Rovers-loanee Bugiel struck the side-netting as Bromley looked to capitalise on a half-cleared corner, but he fired his side ahead moments later.

Former Tranmere Rovers midfielder Adam Mekki drove through the heart of the midfield before slipping Bugiel in to finish powerfully beyond the keeper and give the National League side a twentieth-minute lead.

The Saints’ keeper Danny Lewis dived well to stop George Porter from doubling the lead with a volley from the edge of the area, before Frankie Raymond put in a vital block at the other end – James Armson cutting in and taking aim from inside the box.

Shane Byrne volleyed a dropping ball inches wide for Brackley, in what would be the last action of the first-half.

Bromley captain Jack Holland’s near-post flick from a corner nearly gave the Ravens the perfect start to the second-period but Lewis kept it out, before the Brackley stopper also held on to Raymond’s low drive.

Armson once again gave the Bromley back-four something to think about, finding space to curl just wide of David Gregory’s far-post.

Frankie Sutherland came within inches of stretching the lead with a right-footed effort, before former Charlton man Roger Johnson’s last-ditch block prevented an equaliser at the other end.

Brackley continued to probe for a leveller and were twice denied by the inspired Gregory. The Bromley stopper diverted an effort onto the post after a scramble yards out before he was off his line quickly to smother another low shot when a ball fell lose – Johnson then required to clear from the Bromley line once more as the rebound was sent goalwards.

The Saints were further wasteful in-front of goal as Armson failed to hit the target as a pull-back found him unmarked just a few yards out.

Bromley needed some rest-bite from the relentless Brackley pressure and substitute Brandon Hanlan, released by Charlton this week, provided it. He latched onto a through ball was unable to get a shot away before Gareth Dean was able to track back and get a block in.

Brackley, who lost out to Harrogate in the National League North play-off final last week, seemed to be running out of ideas as we approached the end and Hanlan nearly finished them off. Fellow substitute Josh Rees measured a glorious ball through but the striker couldn’t finish past Lewis.

But there was still time for Armson to be denied by Gregory one more time from 20-yards out – before some late drama took us into extra-time.

A long-range drive rebounded off the post in the 95thminute and the unlucky Johnson diverted the ball into his own net under pressure.

Smith’s side had to regroup for an extra thirty minutes but came close to edging back ahead in the first minute of extra time. Hanlan bundled his way into the area but was once again unable to beat Lewis at his near-post.

The first-period of extra-time was otherwise largely without incident, but Bugiel came close to his second of the afternoon as he nodded a deep free-kick wide soon after the interval.

Brackley saw a low-ball flash across the face of the Ravens’ goal with just over five minutes left and Armson headed over with the final touch of extra-time – but we headed into penalties.

Gregory’s save from Shane Byrne meant by the time Bugiel stepped up to take Bromley’s fifth penalty, he could have won the contest. But he skied his spot-kick, with Adam Walker scoring to take it into sudden-death.

Bromley captain Holland then hit the upright, meaning Brown could fire home to secure the FA Trophy for Brackley.