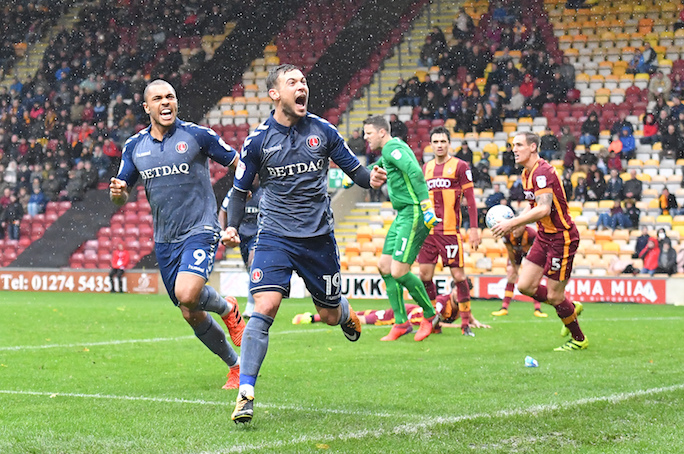 The clash between two of League One’s play-off contenders had been an even, yet open encounter and it was decided as Forster-Caskey prodded home  inside the final 20 minutes. The victory leaves the Addicks fourth in the table, level on points with their hosts.

Alex Gillead’s long-distance daisy-cutter was easy for Ben Amos to deal with in the Charlton goal, before Ricky Holmes nearly earned the visitors an early lead in spectacular style. His left-footed effort almost looped over Colin Doyle, but he just stretched out a hand to tip it over the bar.

The Bantams’ Jake Reeves shot’s was deflected wide after Ezri Konsa’s clearance dropped to him on the edge of the box, but the South Londoners forced a succession of corners at the other end. This culminated with Billy Clarke, returning to the club he joined Charlton from in the summer, cutting in on his left-foot and arrowing a drive just wide of the far-post.

Amos pulled off a more impressive save than his earlier effort as he spread himself well to smother out a header from Charlie Wyke, after a deep free-kick had been nodded back into the danger area.

A slick move involving makeshift left-back Naby Sarr and the man-in-form Tariqe Fosu saw the latter have the ball nicked away from him just as he was about to play the ball across the face of goal, as the first-half continued to be an end-to-end affair.

Holmes curled a trademark free-kick over the crossbar from 25-yards out before Wyke blazed over after some pinball in the Addicks area as the half ended goalless.

Charlton nearly had the lead in bizarre circumstances early on in the second-period, when Holmes’ hopeful cross with the outside of his right-boot swerved towards goal and crashed back off the bar.

As the rain and swirling wind worsened, Forster-Caskey tried his luck from outside the box. Doyle scrambled across his goal to tip it around the post for a corner.

Fosu sent a swerving free-kick at goal which Doyle repelled with his fists, before the same player dragged wide from outside the area moments later. Then the Addicks edged ahead with 17 minutes left.

Holmes’ quick-thinking sent a throw-in down the line for Chris Solly. The full-back’s deep cross was returned across goal by Fosu, where Forster-Caskey nipped in to bundle it over the line.

Dieng was off-target with a drive from outside the area as the Bantams looked for a way back into the encounter – and twice Amos denied them just that.

First he reacted smartly to keep out Wyke’s close-range effort following a pull-back, before clawing Knight-Percival’s header from the resulting corner out of the top-corner of the goal.

The Addicks held on to stretch their unbeaten run to six games and earn a fourth away league win of the campaign.