AFC Wimbledon retained their League One status with a hard-fought goalless draw at already-relegated Bradford City at Valley Parade.

The South Londoners stayed up on the penultimate day of last season, earning a 0-0 draw with Doncaster Rovers and enjoyed more celebrations in Yorkshire with the same scoreline.

The Dons knew that a victory at Valley Parade would guarantee their survival but had very few chances in a dull encounter and had to settle for a point that was enough to see them over the line.

It was a point that Wimbledon needed after Southend dramatically beat Sunderland late on to ensure their place in League One for next season and Plymouth Argyle defeated Scunthorpe United, but were relegated on goal difference.

After a 4-2 defeat to Gillingham on March 2, Wimbledon were nine points from safety and looked dead and buried, but just one defeat from their final 12 matches means Wally Downes’ side finish 20th in the final standings. 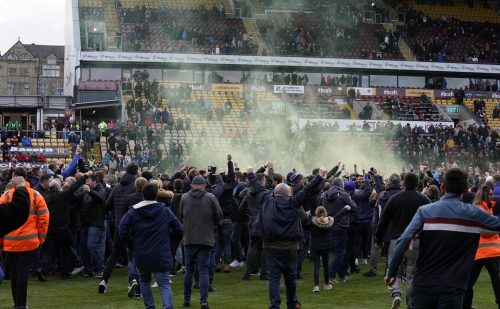 Bradford applied all of the early pressure and Kelvin Mellor came close to giving them a 12th-minute lead, but his long-range strike was comfortably tipped over the bar by Aaron Ramsdale.

The hosts went even closer on 41 minutes, but Eoin Doyle’s near-post effort failed to test Ramsdale, while Steve Seddon stung the palms of Ben Wilson at the other end as the Dons looked to end an uneventful, yet nervy first-half on a high.

And those nerves wouldn’t have been helped by the fact that both Southend United and Plymouth Argyle were both winning at the break, meaning as it stood, Wimbledon were only outside of the relegation zone on goal difference.

That all meant that a Bantams goal would see the Dons drop into the bottom four.

But Wimbledon started the second-half like a team that knew they were one goal from relegation and saw Joe Pigott’s shot blocked before Anthony Wordsworth fired wide from the follow-up with the goal gaping. 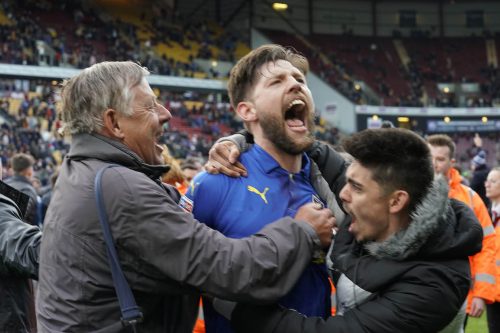 Bradford went straight up the other end and the lively Sean Scannell drilled narrowly wide from 20 yards, with Ramsdale scrambling across.

On 65 minutes Wimbledon thought their perhaps decisive moment had arrived when Pigott cut back on to his right foot and thumped an effort towards goal, but Anthony O’Connor somehow blocked on the line before Anthony Hartigan was excellently denied by Wilson from the rebound.

Despite a draw being enough, it didn’t stop the Dons going in search of that killer goal and substitute Mitch Pinnock thought he had it and so did the travelling contingent as his thunderous drive from distance flashed just wide of the post.

Bradford threw everything forward in the closing stages and the Dons endured some extremely anxious moments, which would have worsened by Southend’s late winner, that meant a City goal would have seen Wimbledon relegated, but they held on to complete The Great Escape. 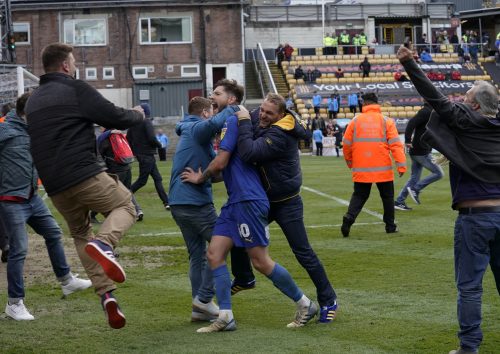 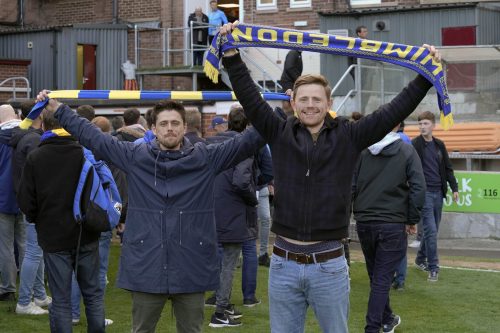 The ecstatic 1,800 travelling fans piled onto the Valley Parade pitch to celebrate with their players.

Wimbledon spent 189 consecutive days inside the drop-zone from October to April but like so often in their short history, they defied the odds to collect 21 points from their last 12 games.