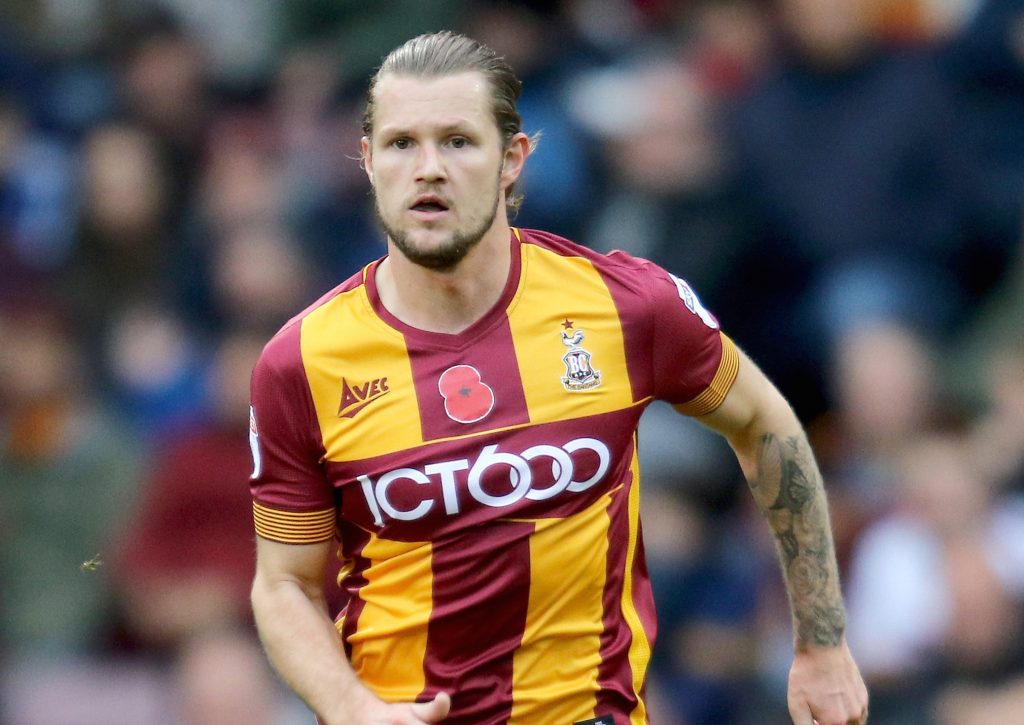 Jake Reeves isn’t renowned as a prolific goalscorer – and he certainly won’t celebrate should he happen to find the net against AFC Wimbledon this weekend.

That’s not only because the Bradford City midfielder is facing his former club for the first time, it’s also because his repertoire does not include a celebration routine of any kind, writes Ben Kosky.

Even the last time Reeves’ name featured on the scoresheet – a goal that stirred passions among Dons supporters like few others – he declined to mark the occasion in any significant way.

That strike nine months ago, of course, gave Wimbledon the lead against their despised visitors from Milton Keynes, with Lyle Taylor adding the second to clinch a 2-0 victory.

Reeves said: “Along with the League Two play-off final in 2016, obviously scoring against the ‘franchise’ was a highlight of my time at the club.

“I think everyone else just picked me up and I didn’t have time to do any kind of celebration. But I’ve never really celebrated anyway, even when I have scored goals.

“My game’s about a lot more than trying to score, though – it’s more about trying to make sure other people score.

“It’d be strange to score against my former club anyway, but of course, it’ll be nice to go back and play against the club where I won promotion and see some familiar faces.”

With Bradford lying fourth in the table, Reeves is chasing his second promotion in three years – and he is quick to acknowledge the part played by Wimbledon in kick-starting his career.

The 24-year-old was struggling for regular first-team football at Swindon when he was offered the chance to join the Dons, having previously spent a month on loan there as a Brentford player.

“For those first six months in League Two, I wasn’t tearing up any trees, but he stuck by me and I learned so much about men’s football and how to impose myself on the game.

“I was given the opportunity to play pretty much every game and that really helped to turn me into the player I am. That’s credit to Wimbledon and Neal Ardley.

“Now I’m enjoying my football. Every player wants to be involved with teams that are pushing for promotion – it adds to the excitement when you’re playing under that bit of pressure.

“This time of the year is always about whether you can grind out results. We had a really difficult game at Southend last Saturday and we managed to come through it unscathed.”

In addition to Reeves, Wimbledon are likely to face another player who departed to join the Bantams last summer – striker Dominic Poleon, scorer of the first goal in that 2-1 win over Southend.

The duo were among 10 players to leave Kingsmeadow during the last transfer window and Reeves, who made 123 appearances for the Dons, believes that high turnover has probably contributed to their difficulties this season.

“Last year (at Wimbledon) we really did punch above our weight,” said Reeves. “I don’t think we won in our last six or seven games and we were still safe.

“I still speak to some of the boys and I know they’re working hard to turn it around.

“I’m delighted for everyone that they finally managed to get the stadium confirmed because that will stabilise the club at this level, 100 per cent.”