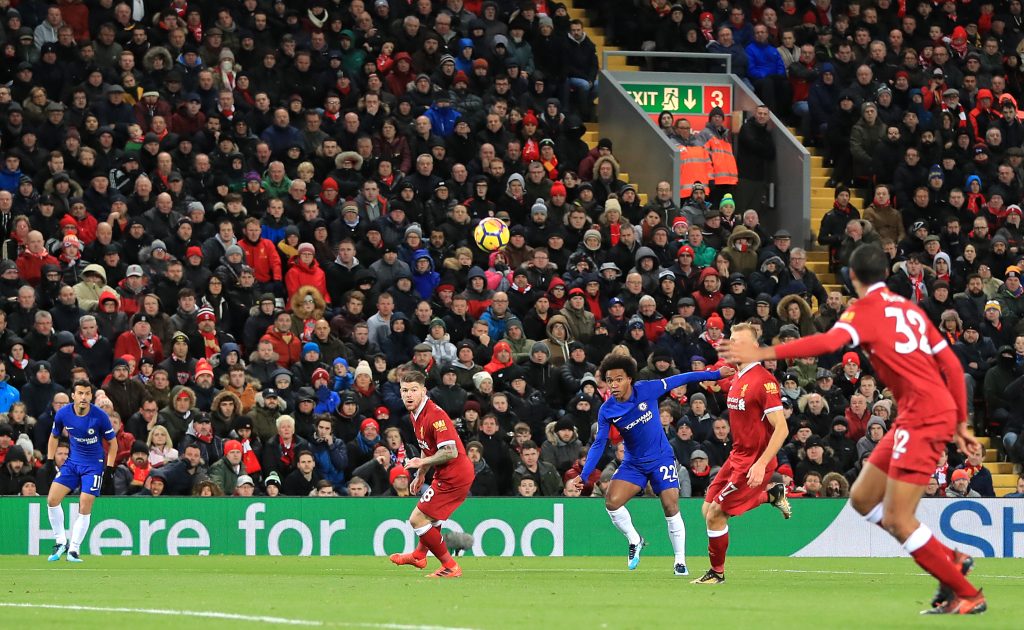 Willian produced a sensational piece of Brazilian magic, with his first touch after coming on as a substitute, to earn hard-working Chelsea a deserved point at fortress Anfield this evening as a 1-1 draw was just about the correct result.
Willian’s angled clipped right-footed chip from just inside the home side’s penalty deceived a static Liverpool defence and mesmerised a shell-shocked Simon Mignolet as the ball drifted over the goalkeeper’s flappy arms.
It was no more than the champions deserved as they conceded a needless goal, when ex-Blue Mohamed Salah took advantage of an error by ineffectual Tiemoue Bakayoko to slot home cooly past Thibaut Courtois on 65 minutes.
Up to that point it was nip and tuck by both sides, whose tactic of counter-attacking was evident, while shaky defensive play was also to the fore.
A high tempo start by both sides, with Liverpool tending to dominate possession. The Blues, for now content to counter-attack with Eden Hazard their fulcrum.
Ex-Blue Mohamed Salah had the first attempt on goal, on 11 minutes, but his edge-of the penalty area shot was high and wide of Thibaut Courtois’s goal.
Simon Mignolet, on 21 minutes, did brilliantly to parry away for a corner on his right post, a vicious low, right footer by Hazard.
A sublime pice of football by Hazard who jinked though the home side’s midfield saw an inch-perfect pass bisects the Liverpool rearguard. Unfortunately it was Drinkwater who picked the ball up, raced clear but was too slow to release the ball and was dispossessed. From the resultant corner a period of pinball was played out in he Liverpool penalty area, with Chelsea attempted to snatch a clear strike on the ball. Each time it was cleared before eventually kicked out to safety.
A Marcos Alonso curling free-kick on 32 minutes gave the Kip a few palpitations, but the ball inched wide of Mignolet’s left uptight.
With six minutes of the half remaining, Morata had a half-chance, his header from a Hazard corner failed to trouble Mignolet.
Courtois was happy a minute later to see Sarah’s beauty of a courier zip past his right post. He was beaten by the pace of the ball.
There were no changes of personnel from either side at half-time.
An innocuous clipped ball by Daniel Sturridge, on 50 minutes, passed along to Courtois who had time to smother the effort. However he let the ball slip under his body and, luckily for him, the ball was coming at an angle and inched past his left post for a corner. It was a bad error by the goalkeeper.
A brilliant counter-attack on 59 minutes almost reaped dividends as a Hazard-inspired attack fed Davide Zappacosta on the right. The Italian cut a low drive across the liverpool six-yard box, where but for the late interception by Joe Gomez, Marcos Alonso would have slotted home at the far post.
A last-ditch save by Cesar Azpilicueta prevented ex-Blue Daniel Sturridge’s close-range blaster from having any goal-bound effect as booth side went for the jugular.
A self-inflicted wound gave the home side the lead.
Tiemoure Bakayoko, was asleep on 66 minutes, on the edge of his own penalty area. When the ball came to him, he failed to do anything defensively at all but he managed to touch the ball onto Oxlade-Chamberlain, who nicked the ball to in-running Salah, who coolly slotted the ball home past Courtois to put Liverpool 1-0 up.
dDanny Drinkwater was replaced by Cesc Fabregas on 74 minutes as Antonio Conte went for a player with creative tendencies.
Next up two minutes later was Pedro for the confidence-strewn Bakayoko.
The Blues upped the pace while leaving themselves open to a counter of their own.
Courtois plucked the ball away from the goalie from a Joel Matip.
Alonso had a great chance but he smashed the ball high over then Liverpool goal from close range after an excellent byline cross by Zappacosta.
Willian then replaced Zappacosta with eight minutes left.
His effect was instant. His first touch brought him into the Liverpool penalty area. He took a quick look up and produced a sensational, clipped angled chip which sailed over the desperate grasp of Mignolet and into the back of his net to silence the Kop and send the away fans into delirium.
The game predictably petered out with neither side confident enough to take an offensive chance.
Next up for the Blues, is a home match against Swansea at the Bridge on Wednesday night.