Sunday, June 6 marks the 100th anniversary of Southwark Bridge – which will be lit up for the occasion. It has survived a bombing during the Blitz, witnessed tragedy on the Thames and appeared in a Harry Potter film. TOBY PORTER tells its story.

Unlike most centenarians, Southwark Bridge won’t get a telegram from the Queen, but it did receive a royal christening, opened amid pomp and ceremony by King George V on June 6, 1921.

This weekend, the bridge – which replaced an earlier, 19th century iron bridge on the same site – will be bathed in pulsing white light to mark its anniversary.

The crossing is one of five City bridges maintained by the City of London Corporation’s Bridge House Estates charitable trust, originally set up in 1097 to maintain old London Bridge.

Giles Shilson, chairman of the City of London Corporation’s Bridge House Estates Committee, said: “It may not have the history of London Bridge or the glamour of Tower Bridge, but for the past century Southwark Bridge has played a vital but unsung role in carrying generations of Londoners across the Thames into and out of the City.”

Work on the steel arch bridge began in 1913 but its completion was delayed due to the First World War.

It was built at a cost of £375,000 – around half the cost of the original Iron Bridge built through private subscription a century earlier. 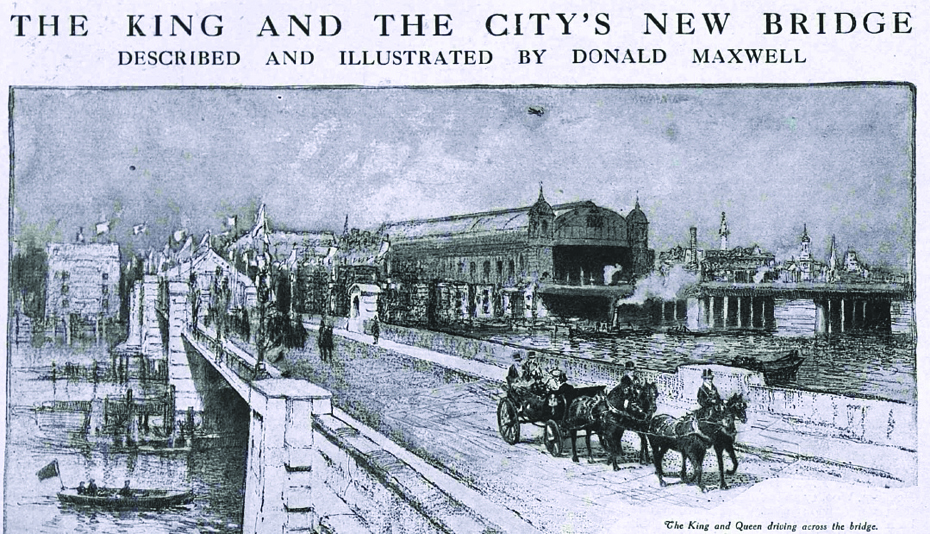 The original iron bridge, lit by 30 gas lanterns, opened to the public for the first time as the bells of St Paul’s struck midnight on Wednesday, March 23, 1819.

It originally cost a penny to cross but never turned a profit.

This, and the ever-increasing crush on nearby London Bridge, prompted the City of London Corporation to step in and make the bridge toll-free – with considerably more fanfare than at its opening – on Tuesday, November 8, 1864.

Following a ceremony by the Lord Mayor, officials tried to hold back the hordes waiting to cross until the official opening time of 2pm but, crowds burst through.

The City Corporation would subsequently buy the bridge at a cost of just over £200,000, but found itself with a structure increasingly unsuited to modern traffic, with its narrow approaches and high gradient.

The old bridge had a gas explosion at its southern end shortly before 2pm on February 1, 1895.

The Illustrated London News said: “The utmost consternation and alarm was caused to the hundreds of foot passengers crossing, while the horses attached to omnibuses and other vehicles became affrighted.”

Five people were injured but none killed.

The cause was suspected to be a discarded match or sparks from a horse’s shoe igniting gas from a leaking pipe.

One of those thrown into the air by the blast, James Price, sued the South Metropolitan Gas Company for negligence, and received £12 in damages.

Following years of debate, work on a new bridge finally began in February 1913, with two temporary iron and wood bridges erected either side of it to allow pedestrians to cross.

On opening day, King George V and Queen Mary drove in their royal carriage through crowd-lined streets from Buckingham Palace to the northern end of the new bridge, which ‘by the King’s own wish’ had retained its old name.

Here, a special pavilion in amber and purple had been erected.

One journalist, Donald Maxwell, a reporter and illustrator for The Graphic, bribed a workman to let him onto the roof of a nearby warehouse.

He said: “A burst of music floats across the river. The King has arrived, and is receiving an address from the hands of the Lord Mayor. Then he opens the gates with a golden key. A fanfare of trumpets and the Bishop of Southwark pronounces a benediction.

“A rider in red, and then the King and Queen drive over the bridge and a loud ovation greets them from the densely packed streets of the Surrey side. Other carriages follow, and at last public traffic commences. The first over is a taxi, and the King’s highway is open to all sorts and conditions of men.”

During the Second World War, Southwark Bridge took a pounding from the Luftwaffe, sustaining serious damage at its northern end during a raid in 1941.

It would be 14 years before the bridge was fully repaired, with two temporary structures bridging the gap in the meantime.

Perhaps the darkest moment came in the early hours of Sunday, August 20, 1989 when 51 people lost their lives after the pleasure boat Marchioness sank after being struck twice by the dredger Bowbelle, shortly after passing under the bridge.

In Tudor and Stuart times, Southwark had been a den of sin, with bear-baiting, prostitution and unlicensed acting – and traces of two of its famed former theatres emerged from the ancient soil in the late 1980s.

Excavations beneath the car park of Anchor Terrace, in Park Street, revealed the site of Shakespeare’s original Globe Theatre, which the southern approach road to the modern Southwark Bridge passes over.

The larger portion of its footprint remains buried but a reconstructed Globe was built around 200 yards away and opened in 1997.

Nearby, the site of the Rose Theatre – which also staged works by Shakespeare and other luminaries such as Christopher Marlowe – was due to vanish under an office block but a campaign led by 20th century acting giants including Lord Olivier and Ian McKellen saved it for posterity, and it survives, as a reborn theatre venue, in the bowels of the new building.

Construction work on the new Southwark Bridge had itself unveiled more recent archaeological finds when, in January 1915, workmen discovered on the river bed the foundation stone tablet from the old bridge, from almost a century earlier.

Also discovered was a glass bottle, encased in concrete, containing 15 gold, silver and copper coins dating from 1797 to 1815.

The original Southwark Bridge’s span, at 240 ft across, was said to be the widest ever built.

It was constructed from 6,000 tonnes of iron from Rotherham.

The surface area is around 46,000 sq ft, the equivalent of three and a half Olympic swimming pools.

The bridge was given a £2.5million facelift by Bridge House Estates in 2011, when more than 1,000 tonnes of abrasive material was used to blast the bridge back to its bare metal framework, before 13,000 litres of paint were used to repaint it in its original colours, yellow and – its own special shade – Southwark Green.

The old bridge, referred to as ‘the Iron Bridge’, is mentioned by Charles Dickens in Our Mutual Friend and Little Dorrit.

Its successor features in the classic 1964 film version of Mary Poppins and in 2007’s Harry Potter and the Order of the Phoenix, in which Harry and members of the order are seen flying towards the bridge on broomsticks.