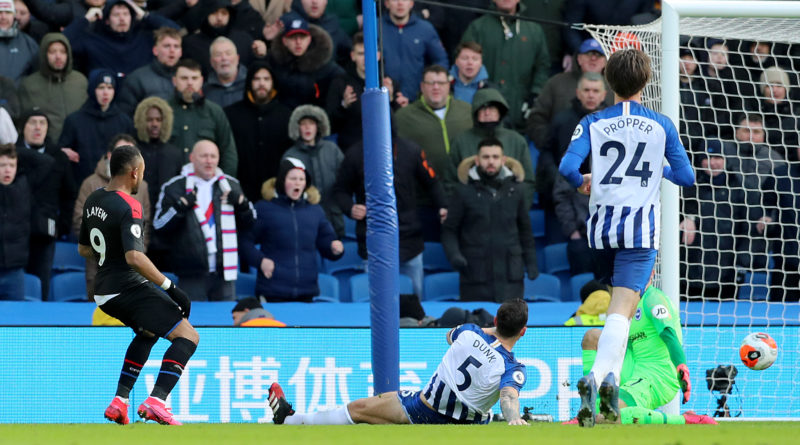 Jordan Ayew was the hero once again for Crystal Palace as they secured an impressive win against Brighton & Hove Albion at the Amex, in a tight encounter that might very well have swung the other way.

Ayew showed a calmness in front of goal that had been lacking against Newcastle Utd, latching on to the end of a Christian Benteke through-ball to slot the ball past Matt Ryan. The goalkeeper did his best to get a hand to the shot but it wasn’t enough, with Ayew and Wilfried Zaha reeling off to celebrate the goal in front of the home supporters in the 70th minute.

It was, at that point in the game, a rare opportunity for a Palace side that had spent much of the second half defending their goal. Some profligate finishing from Brighton – and Neal Maupay in particular – saw numerous chances for the hosts to take the lead wasted throughout both halves.

Palace had their opportunities too though, and should have taken the lead from two gilt-edged chances in the first half, with Benteke and Cheikhou Kouyate guilty of missing early in the game.

In Benteke’s case there was some mitigation, as he attempted to latch on to a perfectly-weighted pass from McArthur. Where he might have been able to take a touch had he been aware that his marker was trailing behind him, he instead attempted to hit the ball on the volley, but shanked the chance wide.

For Kouyate, the opportunity fell to him at the back post. A little more composure should have resulted in the opening goal, but Matt Ryan was quick to react and saved at his feet.

But the Eagles will be delighted with their win, against a Brighton side that are yet to win in 2020, with much of the focus on Palace’s defensive unit.

With the minutes winding down, the hosts threw everything at Palace’s goal. Gary Cahill and Scott Dann stood firm in the centre of defence throughout the onslaught, heading away every cross and throwing themselves in front of every shot.

The defensive pairing, who look like they’ve played together for years, now have two wins and two clean sheets, and along with Vicente Guaita deserve huge credit for their hard work. Palace’s Spanish goalkeeper showed calmness throughout those tense moments.

The first half’s most notable incident was a clash between Wilfried Zaha and substitute Ezequiel Schelotto, with the Argentinian booked for the incident. What happened wasn’t entirely clear, but footage showed Zaha spitting in his opponent’s direction, and words were clearly exchanged – continuing for the remainder of the half.

Zaha was also involved at a point when Palace could have taken a two-goal lead late in the game.

The winger took control of the ball on the halfway line, set substitute Cenk Tosun clear, and the Turkish striker then returned the favour with a pass to Zaha, whose shot hit the post. Replays showed  that Tosun would likely have been flagged offside had the goal been scored.

Palace move on to 36 points and put Brighton deeper into the relegation mix – a result the Eagles fans will take great pleasure in.