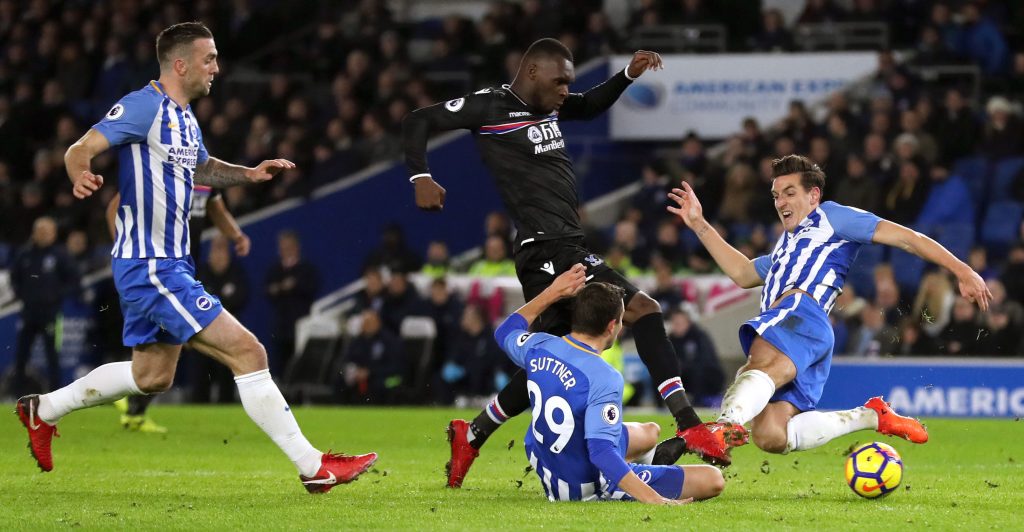 By Richard Cawley at The Amex Stadium

There was a train of thought that TV chiefs had made a bad call by not picking the first Premier League meeting of these two sides as one to screen live.

And you can see why. A rivalry every bit as fierce as if they were housed in the same postcode. And their last encounter at the Amex Stadium an absolute stonker that saw Wilfried Zaha’s double leave Crystal Palace in dreamland as they had one hurdle left to reach the top-flight – an extra sweet pay-off being that Brighton were consigned to more time in the Championship.

It had to be a belter, right? Wrong.

Manchester United’s 4-2 win at Watford might have been an unimaginative pick, but at least it had drama.

There can’t have been many Palace-Brighton games which have passed with as little incident – on the pitch – as Tuesday’s tame affair on the South Coast.

It just lacked edge. Back in May 2013 we had the arrogance of Gus Poyet, who felt his Seagulls were heading for the Premier League, and the eccentricity of Ian Holloway. Not to forget the Poodunnit mystery which since seems to have been solved as a member of Crystal Palace staff being unwell in the visitors’ dressing room before kick-off.

The only whiff on Tuesday was that from the smoke bombs being let off at a fairly regular frequency from the away end. Along with setting off bangers, it was the only thing liable to make you jolt out of your seat.

Maybe some Brighton fans knew there wasn’t going to be any drama. There were some who headed for the exits as early as the 83rd minute near to me – not even turning around to watch as they headed up the steps.

It’s still quite amazing that people pay significant sums of money for tickets and decide to beat the traffic or make less crowded trains leaving early when a match is in the balance.

“It was the correct result, but I understand 0-0 games are never popular,” said Roy Hodgson. “It’s a bit unfair for me to expect too much jubilation from the media here.”

The first top-flight meeting between the two clubs in 36 years will not be recalled fondly in years to come.

A point for Palace is no disaster. Goal difference could be a factor in the final shakedown and West Ham, Stoke City and Huddersfield were all on the end of heavy beatings in midweek.

If the Eagles, sturdier since the former England boss succeeded Frank de Boer, can carry on good defensive habits then it will only aid their cause if it comes down to fine margins.

Brighton have only failed to score once at home this season – against Manchester City – so Palace’s shutout was notable.

The expected key protagonists – Wilfried Zaha, Christian Benteke, Ruben Loftus-Cheek, Glenn Murray and Pascal Gross – could not find that moment of magic to put themselves even further up the popularity stakes with their respective set of supporters.

The respect that Palace fans have for Murray, who scored 31 goals in their 2012-13 promotion-winning campaign, remains undimmed. At full-time they chanted his name. That might have changed if the forward’s late header had not been cleared off the line by Andros Townsend.

The Eagles’ best chance came from a route one approach in the 15th minute. Wayne Hennessey launched the ball forward. Benteke’s shot was more a scuff than a shot and Mathew Ryan parried into the path of Zaha, whose follow-up effort was turned away for a corner.

Brighton probably edged it in terms of opportunities, but the finishing left a lot to be desired. Lewis Dunk headed straight at Hennessey after his movement in the box as he attacked a corner lost marker James Tomkins, and his improvised flick found the side-netting.

Charlton old boy Dale Stephens failed to take a chance shortly before the half-hour mark. Hennessey could only push Jose Izquierdo’s strike back into a dangerous position but the midfielder – on his weaker left foot – lacked control or accuracy.

“I am looking forward to having them at home – I think it will be a much better game,” said Zaha. “There was the rivalry banter – but it was nothing like the play-offs. It was like a normal game.”

It won’t be hard for the return at Selhurst Park in April to be an improvement.