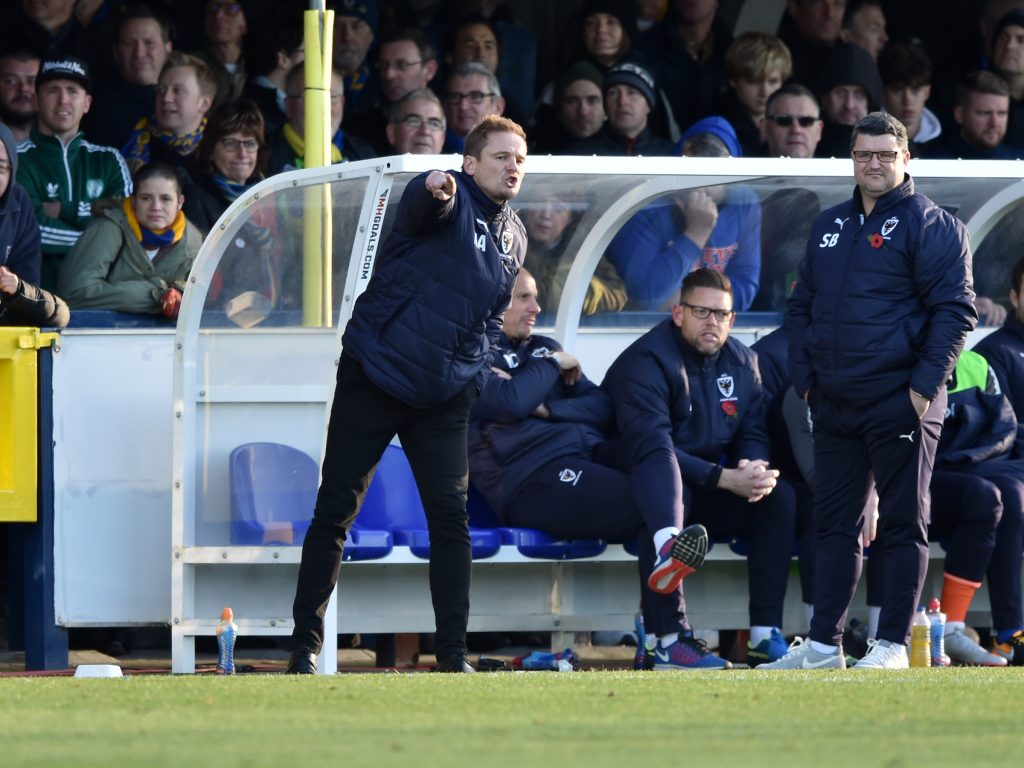 Visiting a stadium where the five previous games have seen defeat – on the receiving end of thumpings and wrongful decisions – would fill any team and manager with trepidation.

One thing you have to accept about AFC Wimbledon and Neal Ardley is the desire to overturn records, writes Laurence Lowne.

Last season, bogey side Oxford United were dispatched in some style.

Northampton Town have gone the same way this season – and now Bristol Rovers.

Ardley was forced into one change with George Francomb suspended for reaching five bookings. A fit-again Jon Meades took his place at left-back.

That simple change brought extra balance to the team, and gave Andy Barcham, on his 100th appearance, the freedom and confidence to make a positive nuisance of himself – getting on the scoresheet just three minutes in.

Meades was involved – as were Liam Trotter and a lovely backheel by Lyle Taylor which set Barcham free in the penalty box. He skipped past one player, and then chipped the ball over the keeper from inside the six yard box.

Wimbledon have scored early goals for two games on the spin.

They could have had three or four as Rovers struggled to contain Taylor, Cody McDonald, Barcham and Harry Forrester.

How McDonald missed one chance could be debated for years to come.

Set free by Trotter, he rounded the keeper and simply had to pass the ball into the net, but leaned back and ballooned it over the bar.

Next up was Taylor, home keeper Adam Smith spilled a Barcham cross and somehow the Dons’ top-scorer placed his shot wide.

Then it was McDonald again. A lovely cross into the box from the right and his header was palmed away by Smith – this was all within the first 15 minutes.

Rovers clawed their way back into the game and Wimbledon goalkeeper George Long had to be alert, making one excellent save.

Just when the home fans were thinking they had got off lightly, up stepped Forrester to make it 2-0.

Trotter won a good ball and played it forward. With Taylor in support, Forrester had options. He used none – producing a stunning shot into the far top corner just seconds before the half-time whistle.

Forrester tweeted a picture of his celebration after the game and dedicated it to Bradley Lowery.

Forrester is maturing into a fine team player and can often be seen tracking back and supporting midfielders and defenders. His finest attribute though are goals of stunning brilliance.

Rovers had been poor in recent games and the introduction of Billy Bodin straight after half-time raised home spirits. While there was plenty of endeavour from the Gas, there was no end product.

Soon though the game was out of reach as a fine route one goal – straight out of the Harry Bassett book of coaching – arrived.

Long took a drop kick from just inside his penalty box, McDonald brought it under control and swept the ball into the back of the net.

More chances went begging and Ardley, turning his attention to a long trip to Oldham Athletic on Tuesday evening, brought off Taylor, Forrester and Barcham to be replaced by youngsters Anthony Hartigan, Toby Sibbick and Jimmy Abdou.

Rovers eventually got a lucky break and a goal back through a deflected Lee Brown shot in the 88th minute.

There is confidence in the side with the back five looking comfortable. Tom Soares and Liam Trotter ruled the roost in midfield while the front players could not be contained.