Rosanna Amaka lost count of the number of rejection letters she got over 20 years.

The engineer, who blazed a trail in the industry because she wanted to emulate her much-loved uncle, kept trying.

There were re-writes and periods when the Brixton-raised mum thought of giving up – but every time, her family kept telling her to persist. “They all said it was good and I should keep going,” she recalled.

Then two years ago she was taken on by a literary agent. Within months, publishers were queueing up to publish her novel, The Book of Echoes, which is out on February 27.

Soon, six major houses were competing in a rights auction for Rosanna’s signature. She eventually decided to sign with one of the biggest book publishers in the world, Penguin – who are making her book their prime title for the spring.

In her first press interview, with the South London Press, she revealed deciding to self-publish was the vital spark.

“When I decided to put it out myself, I thought if only one person reads it, it would have been worth it,” she said. “I have accepted the idea that more than one person will read it now.” 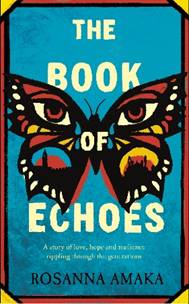 Rosanna began writing The Book of Echoes 20 years ago, to give voice to the Brixton community in which she grew up – just as it began to change.

Her community was fast disappearing – as a result of gentrification, emigration back to the Caribbean and Africa, or simply with the passing away of the older generation. The novel’s depiction of unimaginable pain redeemed by love and hope was also inspired by a wish to understand the impact of history on present-day black lives.

The story is set between Brixton and Nigeria in the 1980s and 1990s, and narrated in part by the soul of an enslaved African woman who died 200 years before and is looking for the children she lost when she was enslaved.

It follows the lives of Michael in Brixton and Ngozi in Nigeria as they battle poverty, injustice and racial tensions.

The story was partly inspired by the 1981 Brixton riots – her mum was late back from workthat day after being prevented from coming home by police cordons.

“There were a lot more big families in Brixton at the time,” she said. “Some people have moved away or are no longer around.

“There were young men around The front line at the time – they were harmless, especially in the 1970s. I once went past the Front Line, very warily – and someone offered to carry my shopping.

“Then there was a period, when the arty type came and you could feel the difference between the haves and have-nots, where the drugs came. Now Brixton has come out of that dip.”

She had always been writing stories, even as a child, and as a teenager took a job as a cleaner at a Clapham Park Road studio so she could earn recording time there – the Special AKA, who had a global hit with Free Nelson Mandela, also recorded there.

“I did engineering because I had an uncle who was one and I absolutely adored him.”

Rosanna was one of just three black women on her mechanical engineering course at the University of London. But she kept writing. “I started writing novels and stopped them,” she said. “I had a passion for stories.

“I started writing about Michael when I went on a work trip to Scotland. I was homesick.

“His story is in the book which is being published.

“But this other voice kept wanting to be involved and I switched to it being the ghost who tells their story – and then her own.”

But then there were the 20 years of rejections. “I don’t know how many I got – I did not pile them up to make myself feel worse,” she said. “I did rewrites, fitting it around work and family, waking up early and writing before the family stirred – then a bit in the evening once everyone was in bed.”

One person showed an interest, but the trail tailed off.  Then, I found an old rejection letter which said keep in touch. Rosanna said: “I wondered if I should and then thought ‘I have nothing to lose.’ So I left a message on their answering machine – and they got back to me.”

She sent them the first three chapters but didn’t hear anything for three months so assumed it had come to nothing again. She decided to self-publish in 2017, as it became much cheaper.  Then they sent her an email, asking her to talk to their commissioning editor and they also found her an agent, The Good Literary Agency, which specialises in BAME authors.

“They were fantastic,” she said. “They advised on improvements.”

The setting is familiar to South Londoners. “Brixton streets are named, there are descriptions of the riots and people around at the time, bus numbers and St Matthew’s Church,” said Rosanna.

“It is not up to me whether I am important for women authors. I just want to be me.

“It might sound a bit Miss Universe, but I will be happy if whatever I write enables us to treat each other better but understanding each other better. I want to add positives to the conversation.”