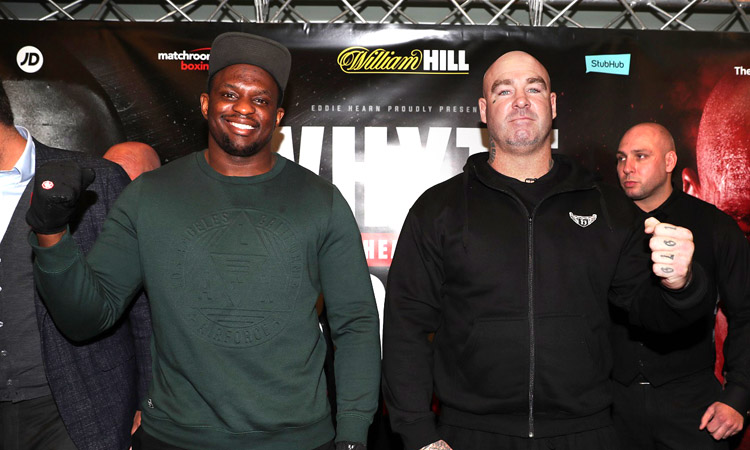 Dillian Whyte admits that he has more to lose than Lucas Browne when the two collide in an intriguing heavyweight showdown at Greenwich’s 02 Arena tomorrow night.

The 29-year-old South Londoner puts his WBC silver title on the line in his home city this weekend.

A win – moving his record to 23-1 – would only underline his claims for a crack at one of the world champions. He is already the mandatory challenger for American knockout specialist Deontay Wilder, courtesy of the belt he holds.

But all those plans, all those dreams would come crashing down if Browne was to retain his unbeaten record. The Australian is 25-0 in the paid ranks.

Browne, 38, has boxed just twice since August 2015. He was stripped of the WBA world title in May 2016 after failing a drugs test, although the ruling was later overturned he did not get his belt back. And there was another positive result for a pre-workout in November of the same year which saw him serve a suspension.

Whyte is by far the more active fighter – with nine bouts in the same period of time.

“He’s looking for a way back in and I’m looking for a way to step up and prove I’m ready to challenge for the world title,” said Whyte, whose only loss was an exciting tear-up with Anthony Joshua in December 2015. “Of course I have got more to lose.

“He hasn’t got anything to lose. Every fight is a risk for me. That’s what I’m in the game for. I could fight nobodies until I get a title shot but I choose not to.

“But it is about levels. You can’t just say you are that level [world title] until you have stepped up to that level. I’ve done all the right things to get to that level. Now it’s just the final piece of the jigsaw.”

Browne has an 88 per cent knockout record. He was a late entrant into the sport, not dedicating himself to boxing until the age of 33 after previously dabbling with mixed martial arts.

Whyte is unimpressed with his stoppage statistics.

“As heavyweights we all can hit,” he said. “I can hit, but I have got more than just power. I’m not the best fighter, the strongest or the biggest but I have everything to make me a good fighter.

“I can punch, box, move, good work-rate, young and sharp – and it’s having something in me that you’re just born with.

“He 100 per cent under-rates my power. I’m one of the most underestimated boxers in boxing. It’s fine, I like that. He hasn’t knocked anyone out who is at a high level.”

Browne has claimed that one of Whyte’s weaknesses is that he gets too emotional and that can lead to a loss of composure.

“I’m a young street kid,” responds the Brixton-raised puncher. “I had to look after myself as a child. Emotion is necessary to survive in the jungle. My emotions ran high because that’s what I knew.

“Emotions drove me, and that was good in some ways. Everyone can see I’m more chilled out and relaxed [now]. I do what I need to do to win.

“I was written off as a teenager. I was not meant to be alive now. I was supposed to be in prison or dead. But I turned it around and made it positive. This is just another fight, another big guy. I fought them on the street and in the ring. It is nothing I haven’t seen before.”

Browne draws confidence from the amount of opponents who have succumbed to his punches.

“I’ve got the power to knock anybody out,” he said. “I know I am not the most skilled boxer on the planet – guaranteed. I have no problems with that, but I can knock anyone out on any given day.

“I can have lost 11 rounds and still knock you out with one shot.

“I have got 45 minutes, or however long it is, to find that one shot. All I have to do is buzz you for 10 seconds for the ref to count to that number.

“When you break down the nuts and bolts that is what it is about, obviously there is a lot more to boxing. But that is the nitty-gritty.

“I’m getting old. I’ve had three fights in three years, due to issues. When I first started I had five or six in one year. I want to get over and done with it, make some money and be able to retire.