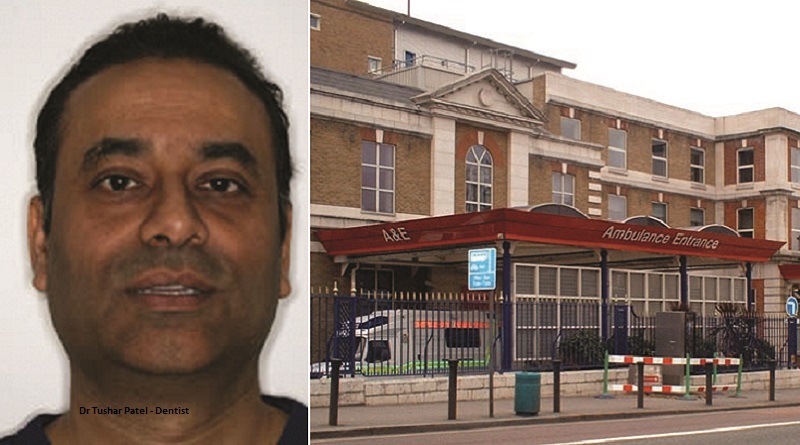 A hospital has apologised to the family of a woman who died 12 hours after being discharged.

She died 12 hours later at 9.26am, having returned to the hospital in the early hours.

The 48-year-old from Brixton had had 10 teeth extracted over two sessions by Dr Tushar Patel, who has practices in Streatham and Purley, but who was suspended for a year on Monday for not covering the wounds enough and not doing enough checks on her medical condition before he did the work.

The medic who treated her at KCH is not currently treating patients, the hospital has confirmed.

Its statement said: “Magzine Gordon was seen in the Emergency Department at King’s College Hospital for complications following tooth extractions at her dental practice.

An internal investigation was conducted following her death and we acknowledge there was a failure to provide appropriate care for which we apologise unreservedly to her family.

The treating clinician is not currently undertaking medical practice.”

It acknowledged that he had carried out “extensive remediation” and had had “an otherwise unblemished career”. The risk of any repetition was considered to be low.

The GDC hearing on October 14, was told Dr Patel should only have removed three teeth per appointment – Magzine had filled in a medical questionnaire stating she was taking blood-thinning medicine Warfarin for a rare blood condition, thrombotic thrombocytopenic purpura, which causes blood clotting.

The suspension will take effect 28 days after notice was given, subject to any appeal.

Also still on October 28, he was shown saying why dentists need to know about a patient’s medication: “It is important for us to know what medications you are on. A case in point are blood thinners such as Warfarin.”

But he did not adequately discuss or record discussions of her complex medical history and the increased risk of bleeding for Warfarin takers following the extractions, the panel heard. It ruled he ignored guidance “well-known to dentists”.

Her wounds were not packed or sutured following the treatment, on June 13 or July 18, the report said.

After having the final five teeth removed by Mr Patel at 3.15pm on July 18 2017, she had extensive bleeding from the extraction sites, the report said.

Magzine attended A&E at King’s College Hospital, at 9.50pm on July 18, but was discharged after treatment to attempt to stop the bleeding.

But she collapsed at home during the early hours of July 19, bleeding from her mouth, the GDC report said.

Her brother Andrew called an ambulance and she was returned to KCH, but medics were unable to save her life, and she was pronounced dead at 9.26am on July 19.

The GDC report on October 23 said: “You failed to pack or suture the extraction sockets.

“You also failed to provide Patient A with specific post-operative instructions on her increased risks.

“Your failures placed Patient A at a significant and avoidable risk of harm and were in contrary to guidance.

“This was not a single error, but a catalogue of errors. Patient A was a vulnerable patient and you failed to recognise this situation.”

Patel first examined Magzine in May 2013 and diagnosed her with advanced periodontal disease – gum disease.

He said she needed some teeth out – but she didn’t come in until June 5 2017, complaining of her “teeth falling out”.

On March 21, 2018 the coroner ruled the medical cause of death was haemorrhage from the tooth extraction site and Warfarin treatment and dental extraction.

Mr Patel accepted “the most serious consequences of your actions” and admitted the allegations put to him, the report said.

The GDC found proved a total of eight charges relating to Magzine’s treatment.

Mr Patel has expressed remorse and has apologised to the patient’s family, the GDC report said.