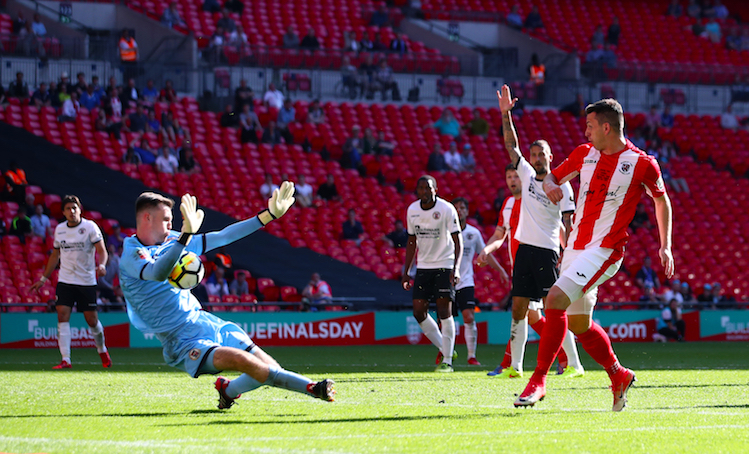 Bromley suffered FA Trophy final anguish on Sunday – but goalkeeper David Gregory was determined to focus on the positives of their big day out at Wembley.

Omar Bugiel had put the South London club in front in the first half against Brackley Town. And Neil Smith’s side were just seconds away from victory when Roger Johnson’s own goal took the contest into extra-time.

Bugiel and Jack Holland missed in the penalty shootout, with Andy Brown converting to secure major non-league silverware for the Saints.

Bromley took around 18,000 supporters to the national stadium.

Former Crystal Palace goalkeeper Gregory, 23, had saved the first spot-kick and he said: “It felt like we have lost the game twice. The game was in our hands on two occasions and we just couldn’t get it over the line.

“But that is one thing ticked off my bucket-list – saving a penalty at Wembley.

“Right now I feel immensely proud. I know it is gut-wrenching to be 15 seconds away from actually lifting the trophy. Then losing on penalties is possibly the worst way to lose it.

“But some of the mental pictures I took in on Sunday will over-ride everything I felt at the end.

“It was a great occasion for the club and we have done fantastically well. Especially this season – it has been the best in Bromley’s history. It would’ve been unbelievable to cap that off with a win on Sunday, but it wasn’t to be.

“It was mental to see all the fans down our end. When I was taking goal-kicks down the Brackley end I kept thinking it was such a spectacle. To have that many there was a credit to the club.

“That was by far the best moment of my career. I don’t think words really describe how proud I was to go out and play in front of 400 family and friends who had come the length and breadth of the country to watch.

“The manager thanked us for what we had done this season and I thanked him personally for everything he did for me this year.

Gregory is already signed up for the 2018-19 campaign. The Hayes Lane outfit finished ninth in the

“The manager was very keen to get a deal sorted around Christmas,” said Gregory.

“I couldn’t have really signed any quicker. I want to play as much as I can, while I can. It is 10 minutes from home, it’s my home town club – a perfect situation for me.

“There is no reason we can’t challenge for the play-offs next season, or even the title, if you look at how tight it was at the top of the table. The play-off system means you can usually be in contention right up to the last day.

“It has made the league a really competitive one but unfortunately only two can go up.

“Boreham Wood and Ebbsfleet United are relatively small in terms of size of clubs in this league and have been competing to go up.

“I’ll go away in early June for a bit of relaxation with my girlfriend, my sister and her boyfriend – but the work doesn’t stop, it’s just a change of scenery. There will be a couple of cocktails and a little downtime but we’ll be back into it at the end of June. It just allows you to recharge the batteries.”