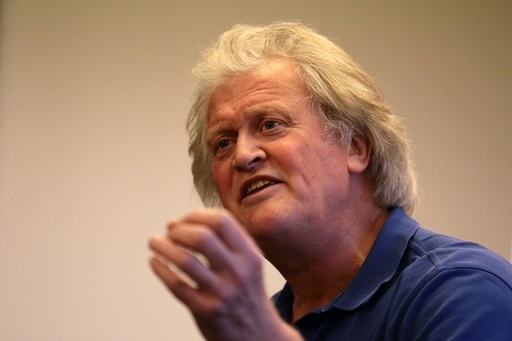 A plumber and pub landlord could meet again for a showdown about Brexit on Friday.
Two business owners – of Wetherspoons and Pimlico Plumbers – have been exchanging barbs over what happens to the country after March 29.
Now Tim Martin, the chairman of the pub chain – has announced he will be visiting The Crown & Spectre Pub, Streatham, on Friday December 7 to speak to customers about the advantages of Brexit without a deal.
He will be veering very close to the South London heartlands of Pimlico Plumbers owner Charlie “Bollocks To Brexit” Mullins – but extolling the virtues after Britain leaves of homemade produce such as ‘Strika’, the English alternative to the alcoholic drink, Jagermeister.
The visit to Streatham is asking for comment from Mullins, who said he will “not stand by and let the UK sleepwalk into a nightmare!”.
Mullins, whose HQ is in Vauxhall, has been vocal in his disdain for a no-deal Brexit, stating on his plumbing blog: “I will not rest until I have done everything I possibly can to stop Brexit, and I would urge everyone, especially businesses, who have the slightest concern about the road we are about to travel down to say, ‘B******s to Brexit’.”
The pair have traded barbs before, on a radio talk show when Martins likened Mullins’ Brexit ideas to the song Stewart classic ‘In a Broken Dream’.
Martin, above, who bears more than a passing resemblance to Stewart himself, claims advantages will be lost “if the government signs up for a deal with the EU, which keeps the UK tied in to the protectionist EU customs union”.
But Mullins wants to mobilise South Londoners to “play a part, and that means abandoning silence and speaking out” against Brexit plans.
Tim Martin will be visiting The Crown & Spectre in Streatham on December 7 at 11:30am for one hour.