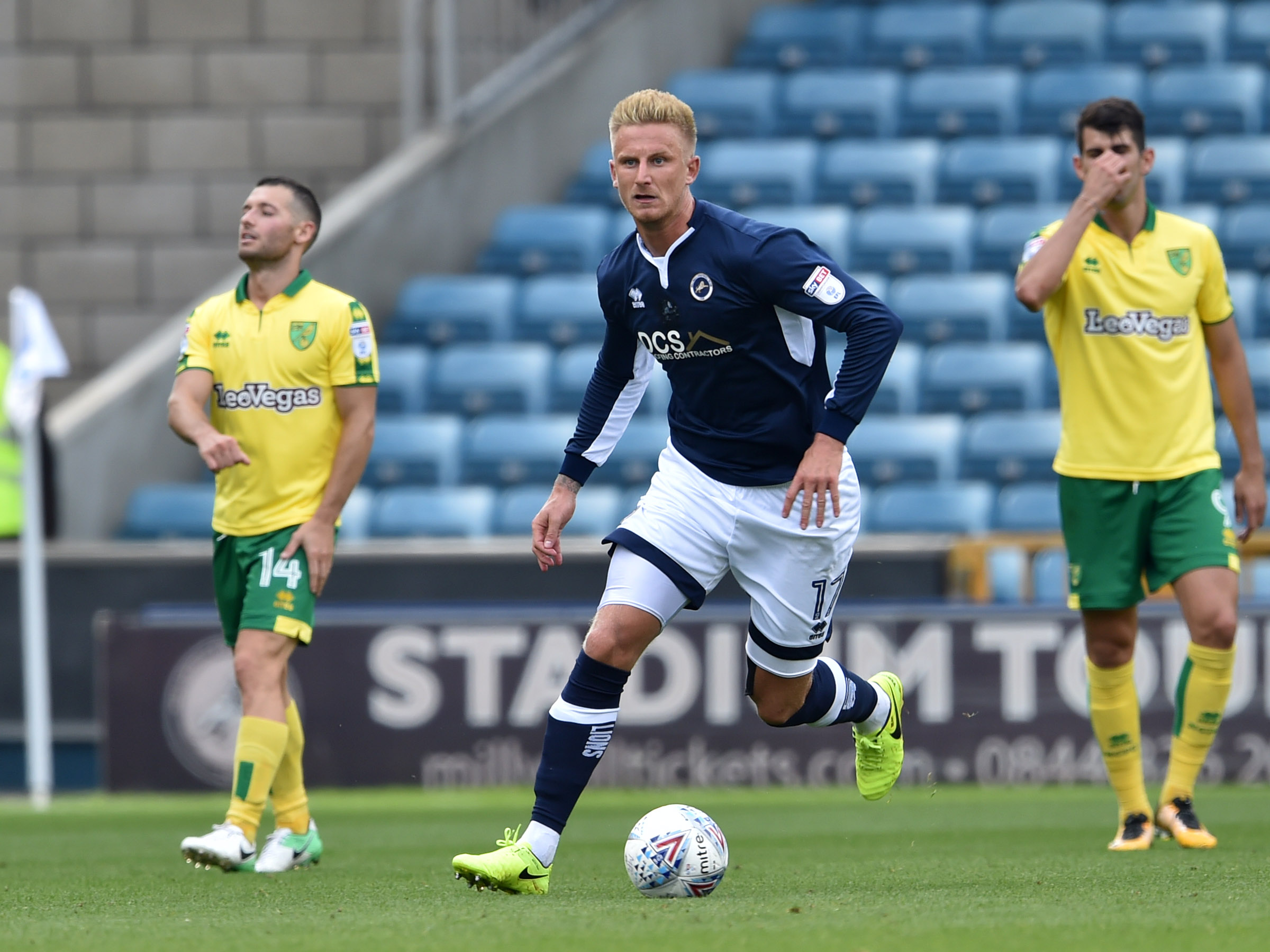 Byron Webster has thanked Millwall physio Paul Tanner for helping him get operated on by the top knee surgeon in the country after rupturing his cruciate ligament.

The Lions centre-back, 30, suffered the damage in the 3-1 defeat to Barnsley earlier this month – amazingly staying on the pitch for the full game.

But a scan the following week revealed the full extent of the injury and he was operated on by Andy Williams, a specialist in ligament repair whose previous clients include John Terry, Didier Drogba, Andy Carroll and Theo Walcott.

Webster went down in the game against the Tykes and received a spell of treatment from Tanner.

“I thought I’d just jolted my knee forward,” he said. “I was in some discomfort and I told the physio I’d got a sharp pain in my knee – then it just went.

“I got up, walked around – it was was stiff but it wasn’t a problem. I did the game and iced the knee.

“I went to Disneyland Paris on Sunday because it was an international break and my knee just didn’t feel right. I rang the physio to tell him I didn’t know if I’d be train on Wednesday, when we were due back. I only lasted 18 hours in Paris. I came back Monday morning to get the scan and got told I had done my ACL – s***. I went to see the specialist Wednesday and had the operation on Thursday.

“He is the best surgeon around and has operated on some big dogs. Paul knows him from his time at Norwich. I’m thankful to him. He has just come to Millwall but knows his stuff. I got on with Bobby [Bacic] too. For some reason I get on with physios and I’m hardly ever injured.

“Paul used his contacts and got me in there to see Mr Williams straightaway. He was due to go on holiday for three weeks and if Paul didn’t know him then I could have been out another three weeks longer. Instead I’m over two weeks in and doing things in the gym. I can’t thank Paul enough – he’s been brilliant.”

The rehabilitation is a long process – in football terms – with Webster’s earliest return date set to be just as the Championship season finishes.

But he has a positive mindset.

“It is an isolated ACL injury which means the miniscus and the rest of my knee is perfectly fine,” said Webster. “They took some ligament off my patella tendon on my left knee and put it where the ACL goes.

“I don’t know exactly the process. I was put under for the operation and an hour and a bit later I woke up – brilliant.

“There were not many stitches. It still looks a bit of a mess because I’m not able to scrub it. I had the stitches out on Saturday so I’ve been able to get some water on that area.”

Webster had been in commanding form for Millwall when disaster struck. Now he has been reduced to a spectator at home matches.

“It’s a difficult one because whenever you are injured or out of the team you’re always on the edge of it.

“I do try and keep myself entertained with the lad and involved but they are out on the training pitch and I’m watching through a window and getting frustrated.

“There have been difficult days but my missus Katie, parents Billy and Julie and my agents have been there. It’s just about making sure I stay positive – keeping good people around me.

“At the start of this week I’ve been doing squat and leg weights. I’m walking around on crutches as the specialist told me to – to keep me slowed down and I don’t try and do too much.

“I’m doing bits, but not running. It sounds silly but I’m learning to walk again properly. I’ve got a good bend on the knee but it is still stiff. It’s about getting it moving again.

‘Monday was exciting because I was able to do the leg work. The first week was a s*** one, then I was able to do more things and then that gets a bit boring again. Then you can do something else – it’s about hitting targets.”

Yorkshireman Webster will be at Tuesday’s match at Sheffield Wednesday.

“I went on Saturday and with away games it depends where it is,” he said. “It is good for me to get a bit of time off, rest and get home if I have to. I’ll go home Friday and I think I’m going to the hotel on Tuesday to get some treatment. The boys will have Wednesday off and I’ll be back in.”

Webster has been able to watch daughter Amelie, seven, and Henri, four, playing football some weekends.

“They are buzzing running around in their Millwall kits up north at their soccer schools,” he said. “It’s brilliant – but I’d rather be playing on a Saturday.”