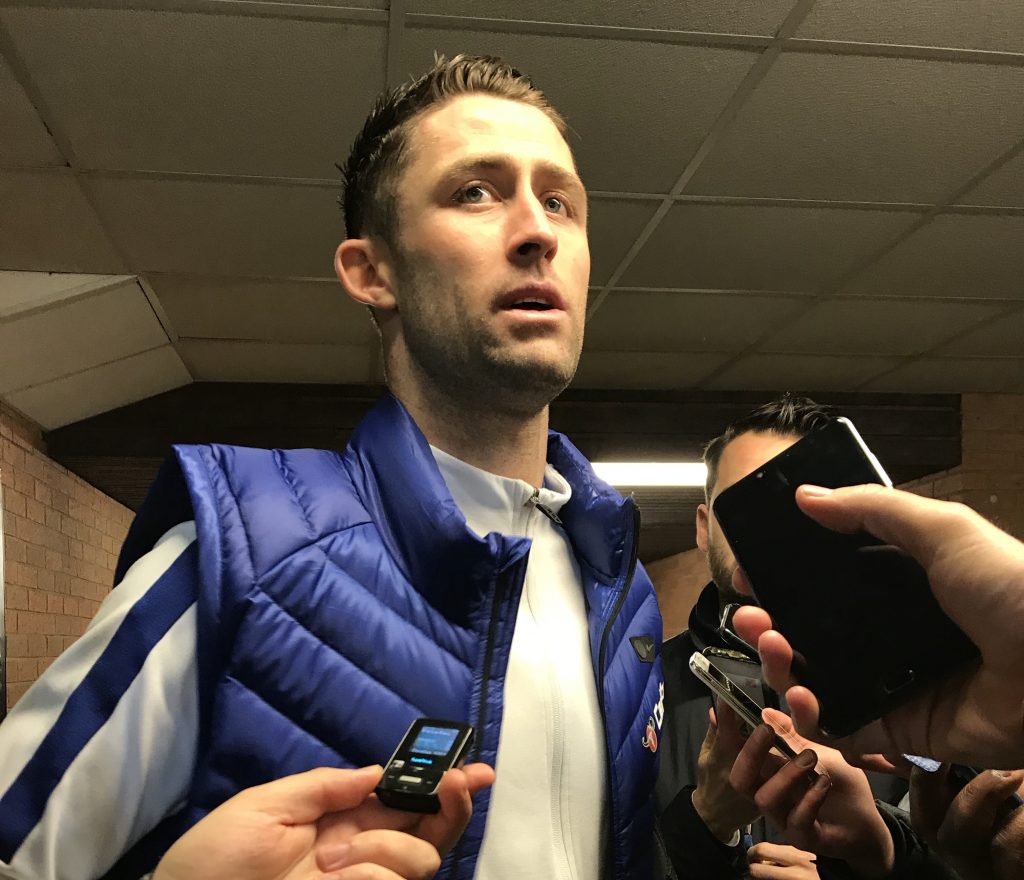 Gary Cahill feels that the signing of Ross Barkley is a “phenomenal” one by Chelsea, “exciting” and a real “bargain.”
Barkley, 24, put pen to paper on a £15million move from Everton to west London last week.
“When you look at the market in this day and age, it’s a snip for a player like him,” said Cahill.
“I’ve played with him, and trained with him and i know what he’s capable of. And so does everyone else.
“It’s phenomenal. It’s a great signing – a bargain,” said the Chelsea skipper.
Cahill, 32, believes that Barkley can resurrect his career at Chelsea after a long-term injury and can become even better.
“He is capable of whatever he wants,” suggest Cahill.
“He reminds me of Ruben (Loftus-Cheek). In terms of attributes, does he have a good left boot, right boot, is he strong, is he quick, can he finish, is he comfortable on the ball? He ticks all the boxes. Now it’s just a case for him to go out and express himself. This club will give him that, like they gave me and others. It’s up to him to take it.
“It’s a very exciting signing”
Cahill is not worried that it might be a risk to sign Barkley.
“He’s come at a great age, he’s a fantastic age. I’d say to him ‘come and be confident – not arrogant confident. And come and listen and learn and watch the top players at this club and work hard and progress.’”
Cahill is confident that he will quickly adapt to life under Antonio Conte and the rest of the Premier League champions and not be overawed.
“He knows what to do,” he said. “You are not talking about a young player. He has over 20 England caps and a player who has played many, many games in the Premier League – even at a young age, so he won’t need too much device from me.”
Barkley might just be the spark that the Blues need in the coming weeks as they challenge on four fronts.
The Blues face an unwanted FA Cup replay after drawing 0-0 with Norwich City on Saturday – something Cahill is not happy about. He fears that the gruelling fixture schedule could have a negative effect when they resume Champions League action against Barcelona next month.
“The mood in the camp is flat, flat, just like the game on Saturday,” he said.
“The first half was terrible, we were not ourselves.
“I just felt the tempo was down, was off. We never felt, without disrespect, that they would cause us any difficulty or trouble, but the game seemed to pass us by. I’ve no idea why. It was a flat game and now we have a replay, which we don’t want, in the only half break we could have had – a week without a game.
“So no, it not ideal. If we played the first half like we played the second, we would have won the game.
“The amount of games is incredible – it’s mad.
“We don’t have a winter break. Instead of having two weeks or a week on a beach, we have even more games. So it is what it is.”
So were the players tired at Carrow Road?
“I think the manager changed the team a lot (nine changes from last week’s Arsenal’s league game) so we should be pretty fresh.” He said.
“Are we feeling it in terms of the other teams in Europe, the Champions League teams, who are starting the second part of their season after their break – possibly.
“Who knows. It’s intense in December and January, But I’ve played in this league for ages and know all about it. But for the lads coming in it’s different and the FA Cup replay on top is not ideal.
“I can say that I’ve been involved in it for 10 years. It’s never bothered me before.
“I’m reflecting on it this year when i see all the players coming in from overseas and the schedule they have over Christmas. It makes you think a little bit.
“Last season and the season before, rightly so, the English teams struggled to get into the later rounds of the Champions League – why do you think that might be?
It’s not an excuse. It’s a fact. What do we do differently – (not have a winter’s break) that’s what we do.
“So to come to the later part of the season, if you have two halves to the season. – it’s not rocket science, that they are going to feel fresher – we don’t. So the boys who have come over are finding that a little bit intense now