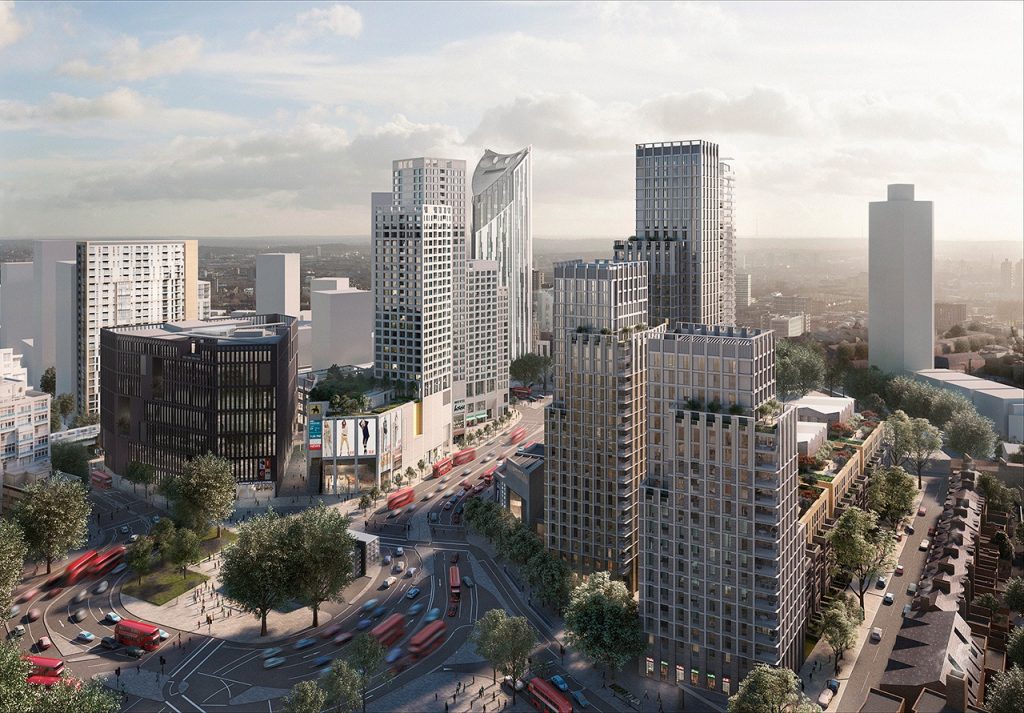 Developers who want to build nearly 1,000 homes and move a university campus across a road have asked for a decision on the scheme to be delayed

Delancey asked for a postponement of discussions of their regeneration plans for Elephant & Castle, which was rejected by a single vote at Southwark’s planning committee meeting last week.

Tonight meeting of planners was due only to give the reasons for the refusal – because last week’s vote rejecting the development did not take place until 1.30am in the small hours of the next morning.

But Delancey believes it can overcome the objections of councillors and opponents – and has asked for at least a month to do so.

Their request came amid a sit-in by students of London College of Communications, part of the University of the Arts London, whose campus would be moved across Newington Butts, to where the decaying 1960s Elephant & Castle Shopping Centre now stands, under the plans.

The regeneration plans have also been the subject of sustained protests by the 35 per cent campaign – which demands 35 per cent of all new developments be social housing – the Southwark Defend Council Housing lobbying group.

A statement from Delancey said: “We recognise that a number of concerns have been raised regarding the planning application for the regeneration of Elephant & Castle town

“Listening to further feedback from these productive preliminary meetings, and having read the draft reasons for refusal and the planning officer’s commentary recently published on Friday evening, Delancey and London College of Communication, UAL believe that there are positive resolutions to address the issues and concerns raised by the councillors and some of the key local community stakeholders.

“In light of the above, we have suggested all parties agree that the final consideration of the planning application be deferred until early March in order to give every opportunity for the key concerns to be addressed and for these discussions to reach a mutually acceptable, positive conclusion for all.”

A new report, released last Friday night, two working days before the scheme was due to be discussed, had cast doubt on whether Southwark could withstand an appeal by Delancey. A report by officers, due to be discussed at tonight’s planning committee, said: “Members must consider whether the reasons outlined below would be sufficient to outweigh the benefits which would arise from the proposed development, and whether they could be adequately defended in the event that the applicant were to appeal against a refusal of planning permission.

“Officers do not consider that these reasons, either individually or cumulatively, would be sufficiently harmful to outweigh the wider benefits of the proposal.”

Jerry Flynn, of the 35% Campaign, said: “The new report is hopelessly biased. It acknowledges that traders will be badly affected, but gives very little weight to the fact that only 33 of nearly 1,000 new homes will be ‘social rented’ equivalent.

“It is designed to pile pressure on members of the planning committee and make them reverse their decision.”

Nearly 900 objections have been made against the proposals put forward by developer and shopping centre owner Delancey.

John Tyson, from the Rockingham tenants and residents’ association, stated: “For decades the shopping centre has been a vital and vibrant part of our community.

“Our residents view the centre as a lifeline, providing them with a safe place to spend time, to shop, to meet old friends and make new ones.

“The proposed demolition of the site, and the anticipated decade of disruption will have a strongly negative impact on our community.”

A council spokeswoman said: “Our planners have a duty to make sure the committee are aware of all the facts so they can make an informed decision.

“As requested, the planning team have put forward the reasons for refusal, but they also need to be clear of the wider implications, which could include the matter being taken to appeal.

“The final decision is, of course, down to the committee.”