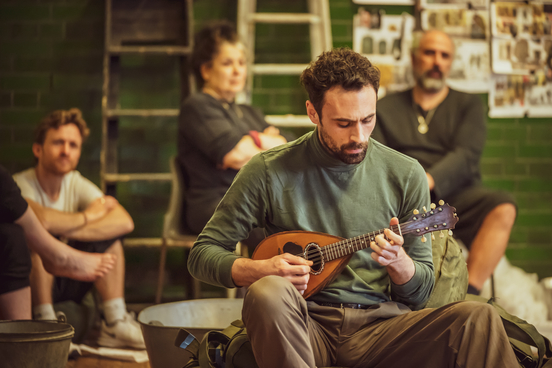 An Italian captain and his instrument are the stars of Captain Corelli’s Mandolin.
But can the show go on without his mandolin?
That might be the dilemma faced by a major touring theatrical version of Louis de Bernieres’ global bestseller.
Because one of its lead actors, Alex Mugnaioni, has lost his 129-year-old mandolin on the train home.
He had travelled back to Sidcup after rehearsal on the 6.34pm Southeastern train from London Bridge on Tuesday, 26 March, when he realized he didn’t have his mandolin with him.
Mugnaioni said: “We spent a long time hunting for the perfect mandolin. It’s devastating to lose it so close to the show. I’m playing throughout the show and you create quite a connection with an instrument. If anyone has picked it up by mistake, we’d be so grateful for its return.”
Captain Corelli’s Mandolin, directed by Oliver and Tony Award nominee Melly Still, is the first major stage production of de Bernieres’ best selling novel. It is currently on a UK tour that is running from 13 April to 29 June, ending in Glasgow.
The producers hope commuters can help find the mandolin, and to contact info@nml.org.uk if they have any leads.
Anyone who finds the mandolin will be rewarded with tickets to the show’s opening night at Rose Theatre, Kingston on 25 April.