There could have been few tougher starts to a pre-season campaign than the back-to-back visits of Brentford and Bristol City for AFC Wimbledon.

Both sides are widely expected to be challenging for promotion to the Premier League after some smart and substantial summer investment. But despite falling to defeat against Championship opposition, optimism will be high that the Dons can avoid a repeat of last season’s prolonged flirt with League One relegation after almost capping a rousing second-half revival on Tuesday night.

Wally Downes’ men more than held their own for the first hour against the Bees on Friday but struggled initially to deal with the Robins. The visitors showed their class in the opening 60 minutes, with the Dons struggling to nullify some crisp attacking movement.

Lee Johnson’s men were manufacturing some neat passing moves, shifting the ball from side to side with an impressive but concise intensity. Some dangerous moments passed without testing Nik Tzanev – who impressed in his half-hour cameo against Brentford – in the home goal.

Wimbledon began to settle and grow into the game after a quarter of an hour, with Anthony Wordsworth dropping deeper to collect the ball and attempt to co-ordinate proceedings. But, shortly after their best spell, the Dons fell behind to a set-piece. The tricky Niclas Eliasson floated a teasing delivery to the six-yard box and the towering figure of Adam Webster guided a header past the stranded Tzanev amongst a sea of bodies. 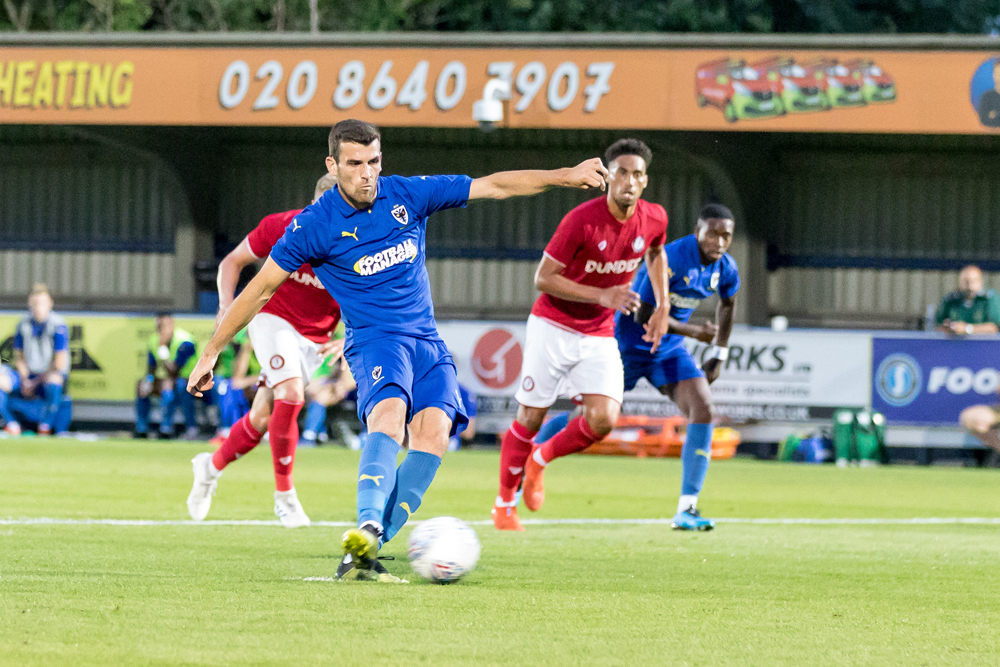 Joe Pigott and Nesta Guinness-Walker, again showing promising flashes from left-wing back, both missed half chances for the hosts to raise hopes of a leveller.

Bristol City, however, had other ideas. After a spirited end to the first half, the Dons found their deficit trebled after just five minutes of the second period. 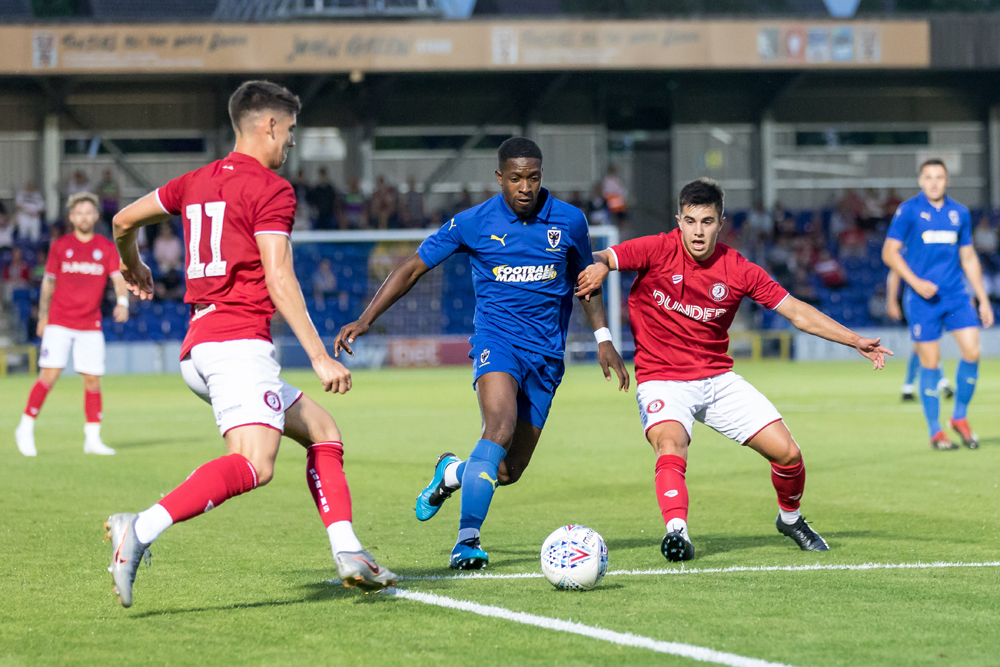 Another swift move from left to right saw the ball worked superbly to Famara Diedhiou, and the Senegalese striker cut in from the left-hand side before unleashing an unstoppable low drive past Tzanev. Minutes later, the big striker was celebrating again – stalking a terrific delivery from substitute Zak Vyner, sliding in to finish and wrapping up a turbulent few minutes for the Dons.

However, it’s clear that the fighting spirit from last season’s miraculous run-in hasn’t departed KT1 just yet, and the hosts rallied to produce a stirring fightback via a tandem of penalties.

Downes again made wholesale changes at the break, with a blend of established stars and youthful prospects taking to the field. 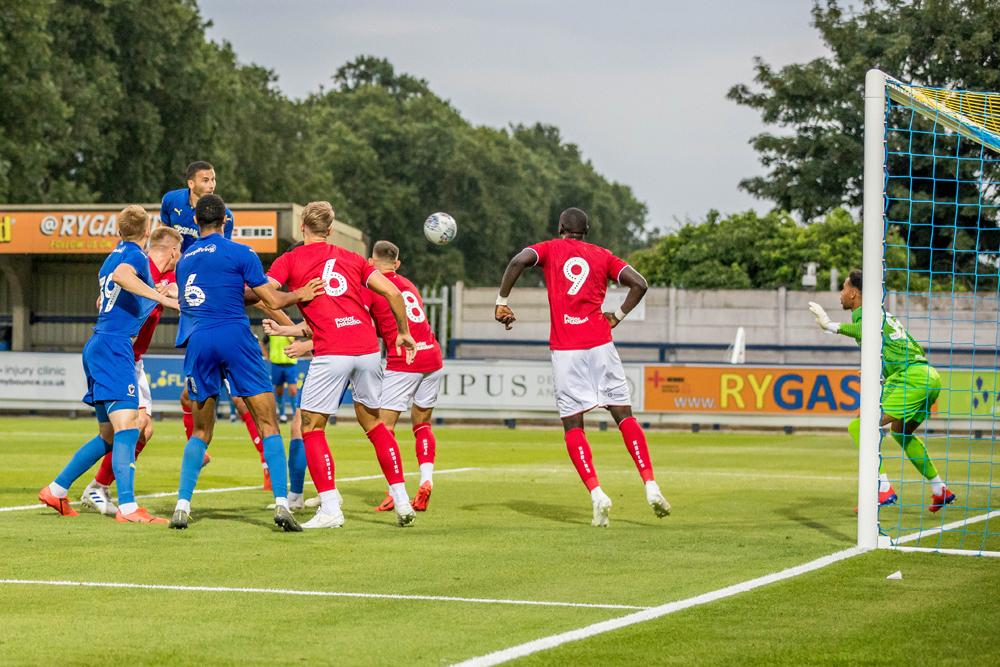 Just six minutes after coming on, young prospect Joe Rudoni was clumsily bundled over in the area.

This presented the chance for new signing Adam Roscrow to ‘open’ his Wimbledon account from the penalty spot, and the frontman duly obliged, calmly sending Jojo Wollacott the wrong way and sliding the ball home.

The hosts were buoyed by their goal and continued to probe against the City backline, but the visitors still looked dangerous on the break and continued to threaten – Matty Taylor denied by a good save by Nathan Trott at his near-post.

The returning Michael Folivi was a constant menace to the Robin’s backline, and he almost had his just reward with what would have been the moment of the match. The youngster showed off his trickery, with a fleet-footed burst before feinting and unleashing a drive from outside the box, which was destined for the top corner, only to be denied superbly by Wollacott. 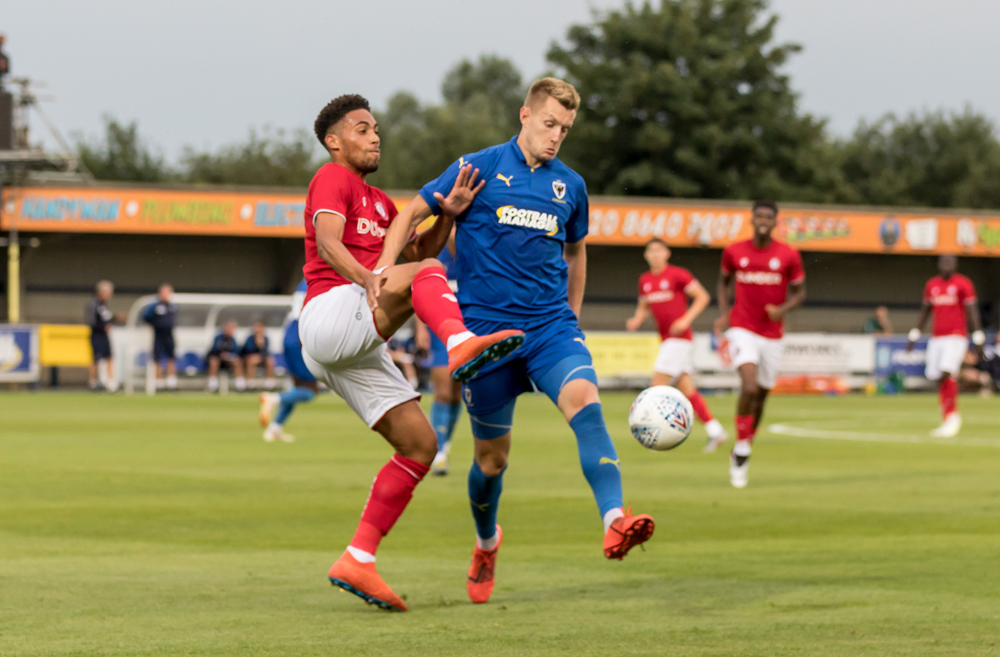 The returning striker was not to be denied his goal, calmly slotting home the Dons’ second penalty of the night after Rudoni’s low cross was handled.

Despite pressing hard and coming close in the dying embers of the game, Downes’ men were unable to complete the comeback their second-half display perhaps warranted in another spirited showing ahead of their weekend trip to Germany.