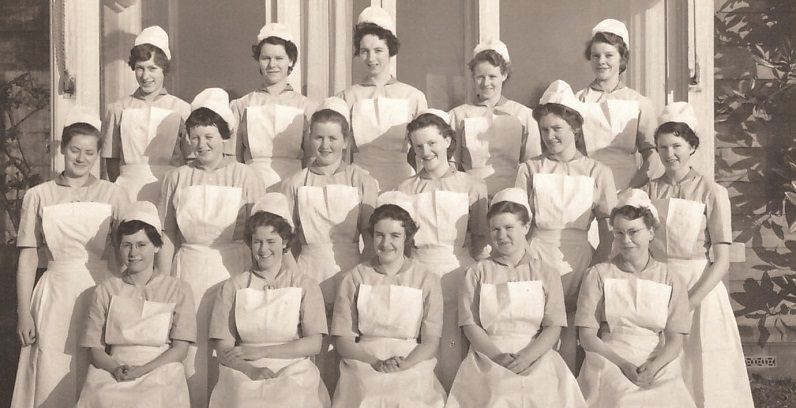 A group of nurses who trained at Guy’s Hospital 62 years ago have been sharing their memories to celebrate the NHS turning 70.

Jo Smith was 18 years old when she started training to be a nurse at Guy’s in 1956 – eight years after the NHS was formed.

She was one of 50 recruits who spent three months learning basic nursing skills at the Preliminary Training School which was based near Redhill in Surrey.

Jo, 80, said: “Every Wednesday at 7.30am a double decker bus would arrive to take us to Guy’s Hospital for lectures and to help out on the wards. We were known as ‘the lambs’ and didn’t really know what that meant at the time.

“Sister Janet would inspect us before we left to make sure we weren’t wearing any make-up and that our uniforms were smart.”

After passing her exams, Jo moved to the nurses’ home at Guy’s Hospital and worked on Addison and Astley Cooper wards.

The mother-of-two, who has five grandchildren, said: “It was very disciplined.

We couldn’t be out after 10pm and we weren’t allowed to have a fiancé.

You could only live outside the hospital once you had qualified.” She added: “The sisters were quite strict – if a bedsheet was turned down too far you had to remake the whole bed.”

Jo, who attended Tadcaster Grammar School in north Yorkshire, chose to study nursing at Guy’s because her headmaster’s cousin had trained there.

She said: “I had never been to London before so travelling down on my own from York by steam train was quite daunting.”

Jo left Guy’s in 1960 to complete midwifery training at Southampton before having her two sons. She then worked as a health visitor until she retired. Jo was one of 11 retired nurses who recently met up to share their memories of working at Guy’s, with three taking a tour of the hospital.

Arleen Gould, who turned 80 on the day of the reunion, said: “I had been to boarding school but living in the nurses’ home was a lot stricter.

We all had jobs to do and I had to clean Sister Janet’s bathroom.

“She was nice but firm and used to pull out the plug in the sink to check underneath and if it was clean you passed.

To this day I still clean underneath the plugs in my home.” Arleen, who now lives on a dairy farm in Holsworthy, Devon, grew up in Somerset before moving to London when she was 18 to train at Guy’s.

The mother-of-three, who has five grandchildren, said: “My father would worry about me walking through London at night so he used to give me 10 shillings for a taxi.

He didn’t know this, but I used to save up the shillings so I could go on holiday.

“I loved London and always felt safe. People would say ‘hello nurse’ as I walked by because they could instantly recognise our outdoor uniform which was a black cape and bonnet.”

She added: “During the day we had to wear caps with eight flutes in the back which were a nightmare to make.

“I was not a very good sleeper and was known to make a cap in the middle of the night while I was asleep.”

Arleen, whose sister was also a Guy’s nurse, left the hospital in 1960 to train to become a midwife at Dulwich Hospital in London.

She travelled around the world for two years before moving to Taunton in Somerset to work as a scrub nurse in the operating theatres.

After marrying her boyfriend, Les, in 1966, Arleen worked as a practice nurse before becoming a healthcare assistant until she was almost 75 years old – leaving the job on the exact same date as when she started at Guy’s.

Lorna Horman, 80, from Jersey, attended the reunion and toured Guy’s Hospital with her daughter, Lisa Davies. Lorna, who has four children and four grandchildren, said: “I will never forget my time at Guy’s.

One of my earliest memories is the porters’ office at the front entrance – the matron would check every morning to see who had arrived back after 10pm.

“We had to sign in but many of the nurses often wrote ‘Florence Nightingale’ so as not to get found out and I used to choose ‘Jane Eyre’.”

After she qualified, Lorna worked on the psychiatric unit at Guy’s and left in January 1961 to move to Guernsey, and then to Jersey.

She worked part-time in nursing after two of her children were born and then became a stay-at-home mum.

GP receptionist. June Allen, head of nursing surgical oncology at Guy’s and St Thomas’, who led the tour of Guy’s, said: “It was such a privilege to meet this fantastic group of ladies who continued nursing through their entire careers and had such a vast wealth of experience between them.

“They told the most wonderful stories of life as a student nurse on the Guy’s campus.”

It is one of the biggest NHS trusts in the UK, with an annual turnover of almost £1.5 billion, and employs about 15,300 staff.