No Lyle Taylor, no party. And Charlton really wanted the good times to keep rolling as they celebrated 100 years at The Valley.

Instead the Addicks had an afternoon of unwanted firsts to take the edge off centenary celebrations.

The first time they had not scored in a Championship fixture this season. A first defeat as their unbeaten start to life back in the second tier came to an end. 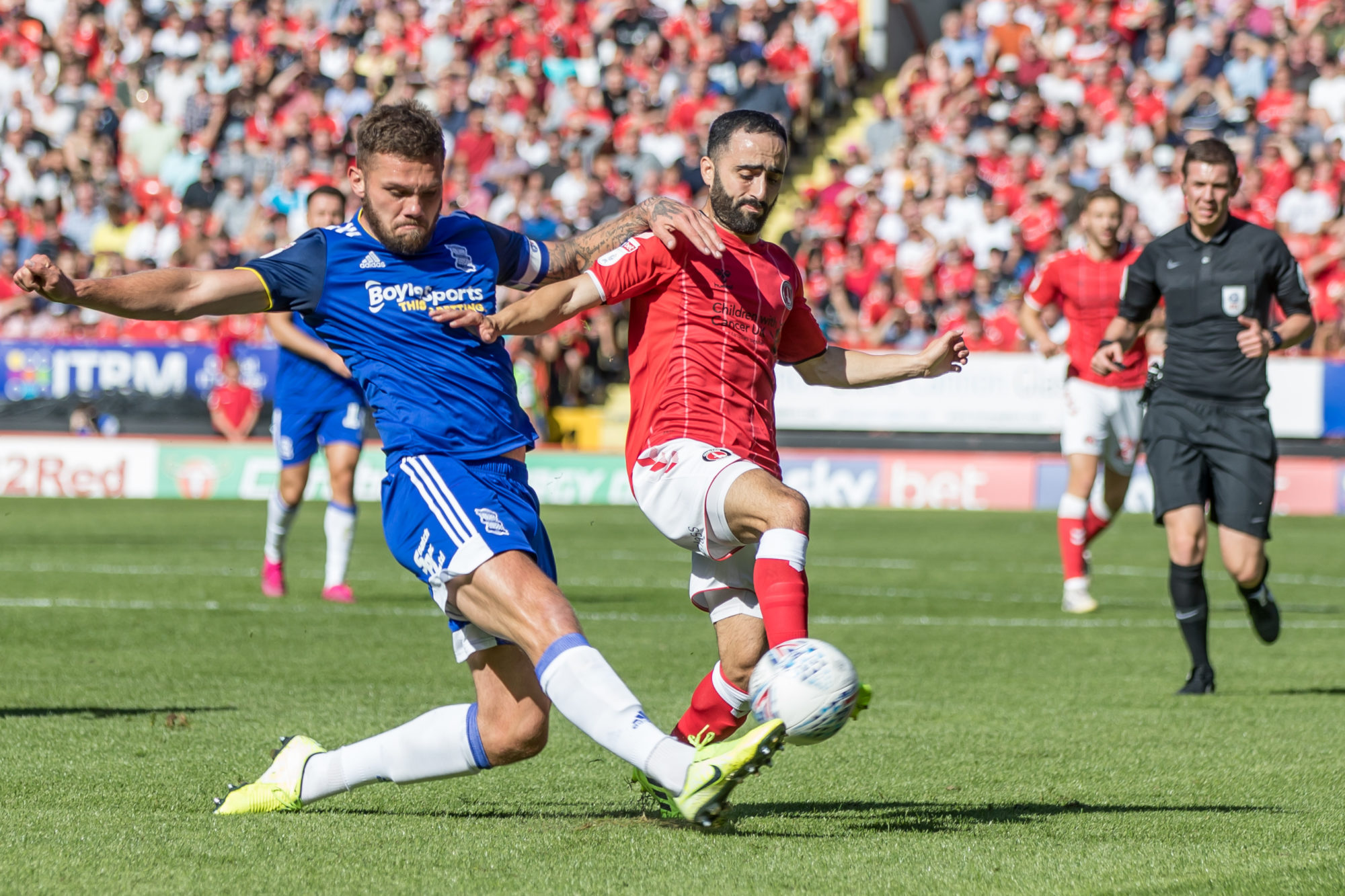 And no indications that Taylor – such a focal point and inspiration for Lee Bowyer’s team – is going to be back available any time soon.

The Addicks boss was unable to provide a timeframe on the striker’s absence with knee ligament damage suffered while on international duty with Montserrat. “He’s going to be out for a bit now,” was vague – and perhaps intentionally so.

Bowyer is quite happy to indulge in a little bit of fake team news, and there is absolutely nothing wrong with that if it leaves the opposition second-guessing his selection options. 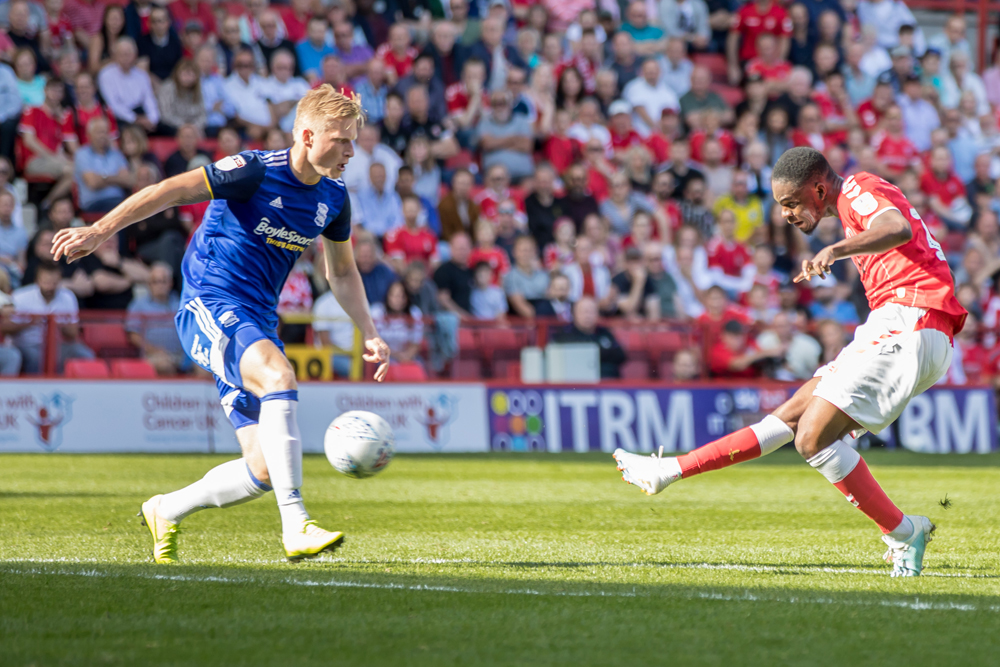 Igor Vetokele was never going to play for Charlton in the play-offs last season but that didn’t stop Bowyer from making it sound like it was a weekly race for him to be fit.

The talk is that Taylor will be out for between eight to 10 weeks.

If correct then that means he would miss either nine or 10 Championship matches – possibly coming back after the derby at Millwall on November 9. 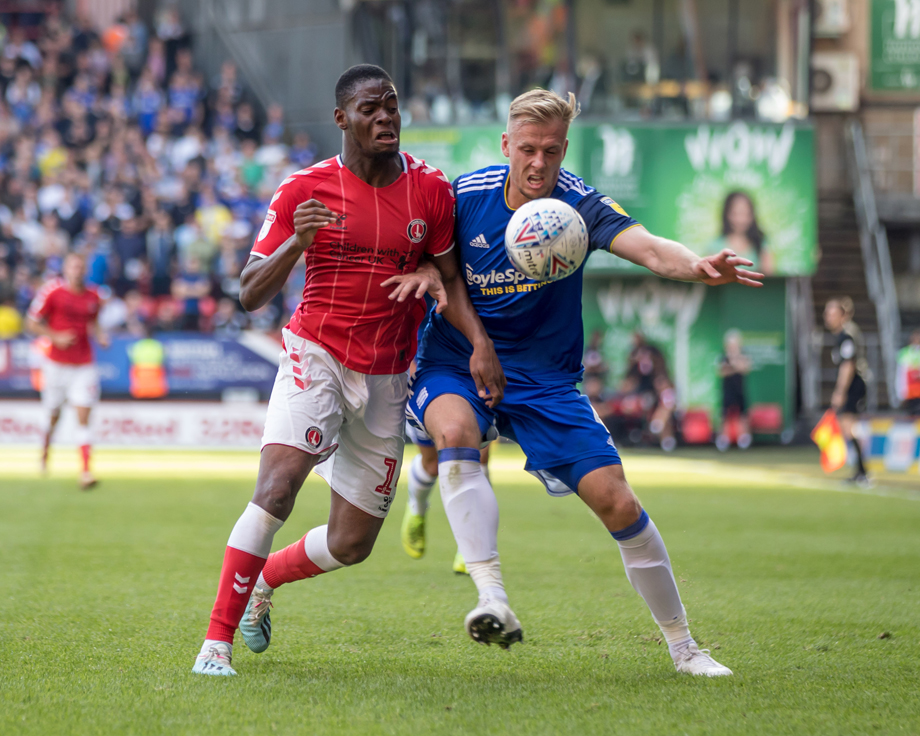 “This is a chance to see what life will be like without him,” was one pre-match comment on Saturday – alluding to the fact that Taylor is likely to be the source of fresh bids in the January transfer window.

The truth is that Taylor is irreplaceable, particularly so when Charlton owner Roland Duchatelet will not sanction spending big on a replacement.

One stat that stands out is that only four goals have been scored by other out-and-out strikers for Charlton in the last 27 games – Vetokele chipping in with three and Jonathan Leko also on target.

But, even then, Taylor also scored in those matches.

One of the reasons the former AFC Wimbledon man has been such a hit in SE7 is that he has helped create plenty for his team-mates as well. He knits their offensive play together. 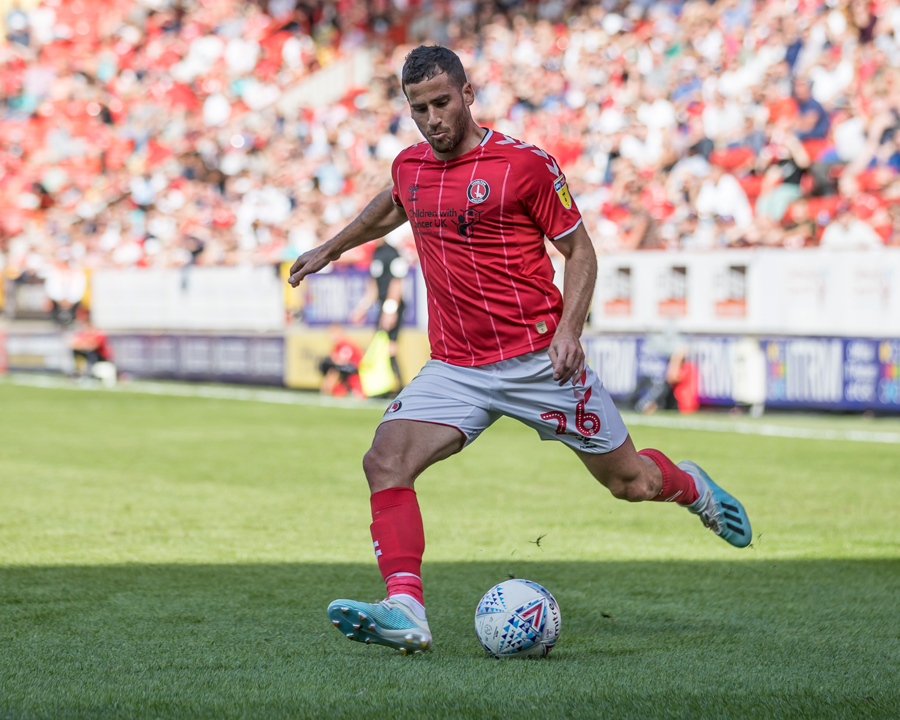 Birmingham showed a resilience and defensive steel that was at odds with their previous away form – three successive 3-0 defeats. They were also without a goal on the road.

But Jude Bellingham ended the wait in front of a Jimmy Seed Stand packed with 3,136 travelling Blues fans.

Charlton were cut through too easily. Maxine Colin breezed between Conor Gallagher and Sam Field and slid in Kerim Mrabti on the right of the penalty area, the Swede’s low first-time ball swept home by the 16-year-old – Chris Solly’s attempts to block the shot proving in vain.

Would Taylor have made the Addicks more effective in the final third? You can never say definitively. Maybe Charlton would still have struggled to break down Birmingham. But in tight contests such as this, quite often he has proven the difference before. 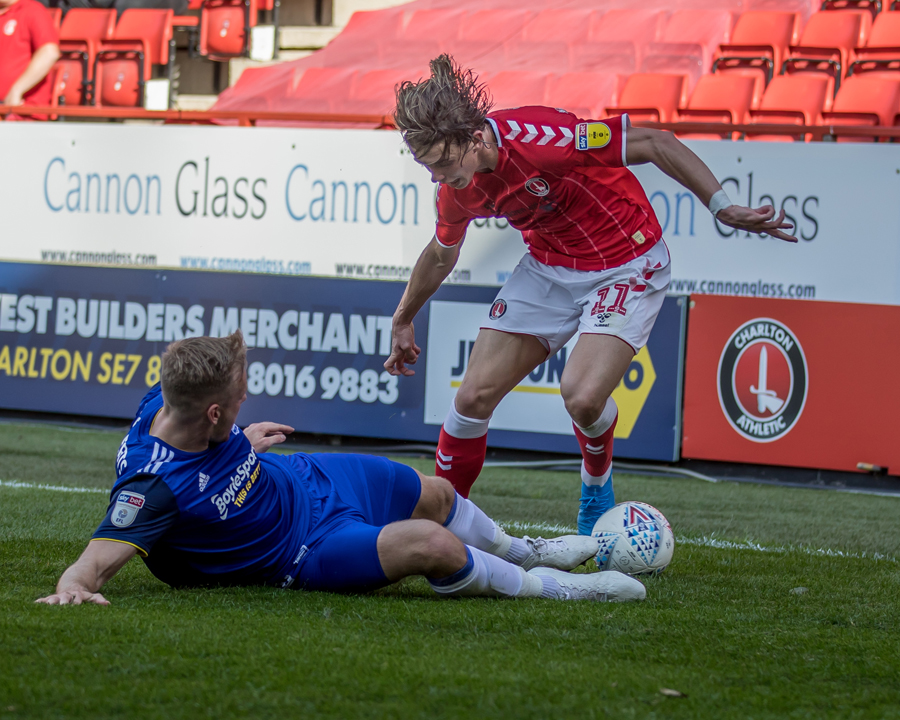 It took until the 72nd minute for them to test visiting keeper Lee Camp.

Chris Solly averages a goal roughly once every 100 games and he did well to get power on his weaker left foot, Camp parrying the ball to Gallagher – who could not profit on the opening from a tight angle.

Moments later and the Chelsea loanee had the Blues stopper going low to his left. But that was as good as it got for the home side as they failed to net for the first time since March 16. It also ended an 11-game streak of scoring at home. 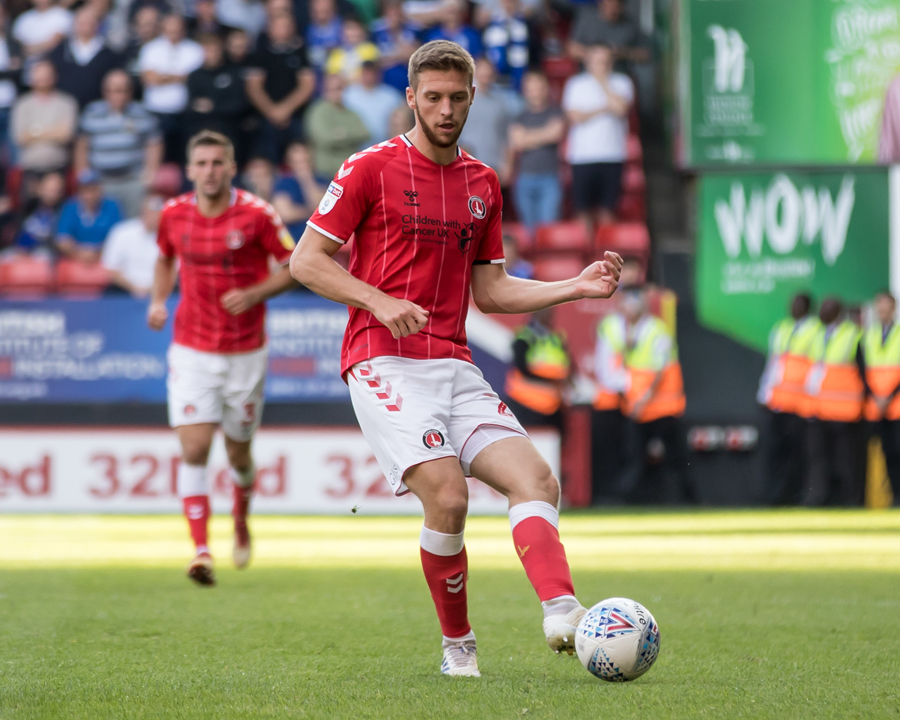 Strikers so often win you games. And Darren Bent – one of their very best in recent history – got a huge welcome when he was one of a host of former Charlton greats to be introduced to the crowd during the interval.

Taylor is a fans’ favourite whose contribution to the club will not be forgotten either. And he was sorely missed at the weekend with Tomer Hemed and Jonathan Leko struggling to be on the same wavelength.

That’s not to say the pairing won’t come good. 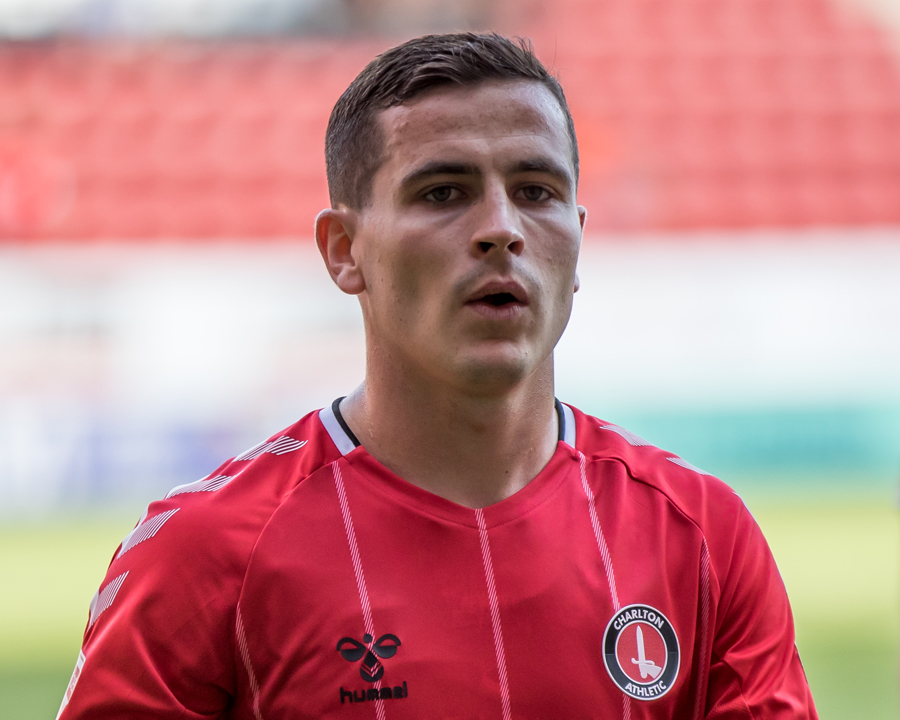 Hemed had played just 53 minutes of football before the weekend, with the double whammy of being out of the picture at Brighton and then a delay on his transfer to Charlton putting him further back.

Leko was given little space to shift through the gears by a Birmingham side who pressed effectively.
Ben Purrington was left frustrated in the 34th minute when the West Brom loanee shot wide instead of popping the ball into his path. Youngsters don’t always get their decision-making right and nothing came off for Leko.

Erhun Oztumer, one of two changes from the 2-0 victory at Reading before the international break, found it difficult to exert influence as well. 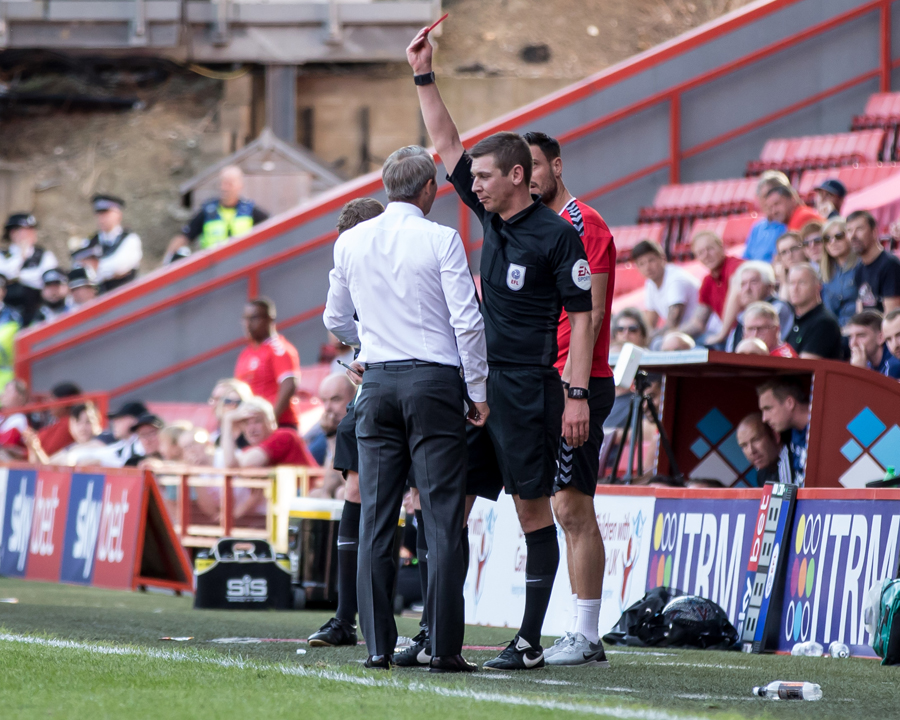 The former Bolton man was replaced for the final 31 minutes by Jonny Williams, with Bowyer not opting to overload the playmaker’s workload after international duty earlier that week for Wales.

It will be fascinating to see how the Addicks react to Saturday. This was their first reverse in a standard league game in SE7 since October 6 and only their third defeat in 26 games in all competitions. Confidence plays such a big part in football and they have been used to getting positive results.

The challenge doesn’t get any easier after this weekend’s trip to Wigan Athletic as some of the division’s heavyweights lie in wait –  Leeds, Swansea and Derby at The Valley and Fulham, Bristol City and West Bromwich Albion away.

Landing knockout punches on the big boys without Taylor will be more difficult.