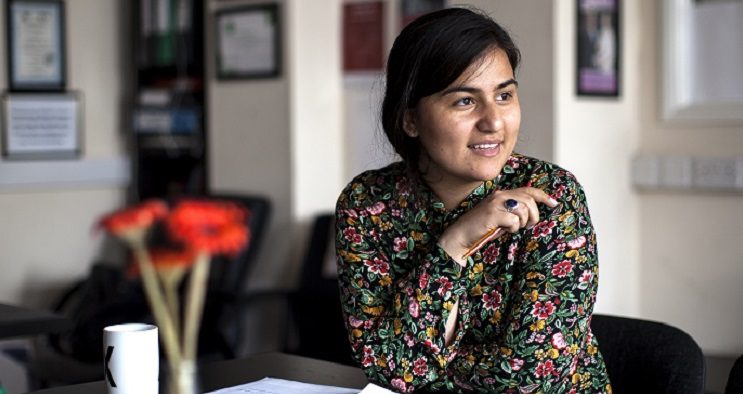 A charity worker has been named in the top five women in her sector at an awards ceremony.

Rabia Nasimi was nominated for a Rising Stars Award by We Are The City, an organisation created to promote women leaders across the capital.

The sociology postgraduate helps run the Afghan and Central Asian Association (ACAA) – a charity her father founded when the family first arrived in this country after fleeing the Taliban – from its base in Deptford.

She has dedicated more than 20 hours a week to help run the organisation throughout her six years of studies at Goldsmiths – where she received a First for her dissertation – plus the London School of Economics and now Cambridge.

As part of her work at the ACAA she has worked on development programmes in Afghanistan as well as supporting women and families who are refugees and asylum seekers in the UK.

“My work at the organisation has helped me to develop strong monitoring and evaluation skills as well as project management capabilities,” she said.

“I have been active in the community from a very young age and have dedicated my life to improving the lives of my home country through the Afghanistan and Central Asian Association, all despite being in full-time education.

I have always endeavoured to improve my work with others and have seen the women’s refugee programme that I work with grow from strength to strength, with demand outstripping funded supply.

“I hope to be able to expand the services of the ACAA and reach far more refugees in the future.”

The Rising Star awards were introduced to showcase the UK pipeline of female talent below management and to create 100 female role models across different industries and professions.

The awards were entered by 1,250 individuals and judged by a panel of 54 independent judges.

Chris Duncan, managing director of Times Newspapers, which sponsored the awards, said: “It has been a tumultuous year for gender politics across the world, and programs that nurture the next generation of female talent have never been more important.

“We at The Times and The Sunday Times are delighted to continue to support the Rising Star Awards to recognise the tremendous work being done by the next generation of leaders across British industry.”

ACAA, based in Deptford Broadway, won a Queen’s Award two weeks ago for its voluntary service supporting Afghan and other refugees.

It was set up in 2001 by Dr Nooralhaq Nasimi, after he was targeted by the Taliban for being an academic and had to flee Afghanistan.

He began organising cultural events and day trips for the Afghan community in London.