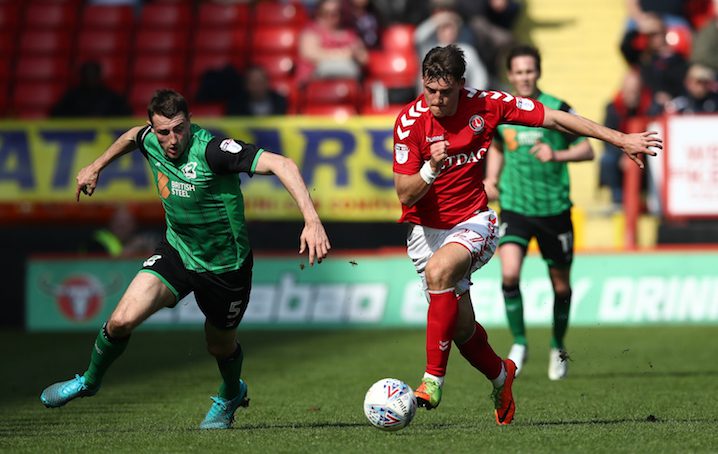 Addicks caretaker boss Lee Bowyer had described the match as “must-win” for his side if they wanted to be make the top six but saw his slip to a second successive defeat.

Charlton, as was the case at AFC Wimbledon on Tuesday, struggled to find space or make inroads in the final third.

Nicky Ajose’s powerful strike from the edge of the box – parried away by Matthew Gilks – was their only notable shot on target in the opening 45 minutes.

Too often the ball was worked backwards in a style that was so unpopular during Karl Robinson’s spell in charge.

Amos saved with his legs from Hakeeb Adelakun on 16 minutes, the lively Duane Holmes sliding in the right winger just moments before the ball was worked up the other end for Ajose’s strike.

Charlton were caught upfield as Scunthorpe opened the lead on 31 minutes. Adelakun was adjudged to be onside by the linesman on that side and his low cross was prodded home by Toney from no more than a few yards out.

It needed a fine save by Amos early in the second half to prevent it going to 2-0. Toney hit a first-time volley from Jordan Clarke’s diagonal ball to only concede a corner.

Bowyer had seen enough and made a double change with Tariqe Fosu and Josh Magennis replacing Michal Zyro and Sullay Kaikai.

But that switch did not produce a response from the sluggish home side. Although Ajose curled a shot over the bar it needed Amos to once again be on hand to push over Adelakun’s fierce hit – the wideman played in by substitute Lee Novak, his first contribution of the afternoon.

Jay Dasilva picked out Fosu in the 86th minute but his low shot was narrowly wide of the right post.

Charlton belatedly boxed the Iron back in the final stages but Gilks turned a low Ben Reeves shot around his left upright from a short corner by Jake Forster-Caskey. And the last action before the full-time whistle saw Fosu slam over in a packed penalty box.

The result leaves the Addicks eighth in the table and once again not in control of their destiny. A trip to third-placed Shrewsbury Town awaits on Tuesday night.