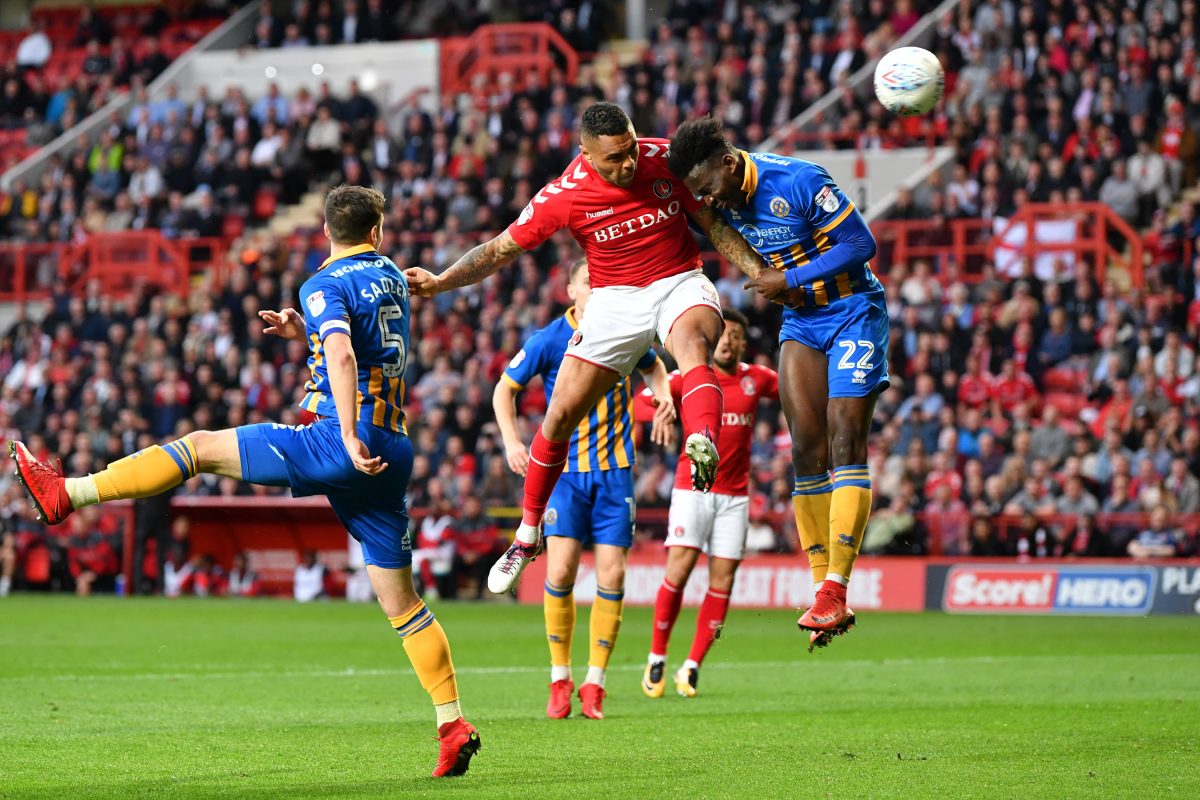 It was a night of tension, toil and time-wasting – but Shrewsbury emerged from a scrappy League One play-off semi-final first leg with a slender lead.

This wasn’t a brilliant evening at the office for Charlton. But they still managed to create most of the scoring chances without making the most of them.

It certainly is not over for Lee Bowyer’s side but they now find themselves going to Shropshire on Sunday evening needing to force the issue.

Jon Nolan’s sweet finish 10 minutes from time was out of keeping with a nervy tie that was guilty of a lack of quality. His strike came down off the crossbar.

Charlton’s prospective new owners – Donald Muir and Gerard Murphy – were in attendance and it now seems a question of when, not if, the Australian consortium end Roland Duchatelet’s hugely unpopular reign.

The Addicks will need to improve if the first steps after the takeover are not to be with the view to mounting a promotion push from League One in the 2018-19 campaign.

Plenty of Bowyer’s matches in charge have been decided by fine margins – often in Charlton’s favour. But not this time.

It was not so long ago that Shrewsbury came to SE7 and rolled over a fairly docile home side. Bowyer’s team have shown they will battle and needed to do plenty of that in a physical encounter.

The Addicks ramped up their work-rate right from the word go and the early exchanges were promising.

Omar Beckles got a vital touch on a Stephy Mavididi cross which was flashed across the face of the visitors’ goal. Josh Magennis met Ezri Konsa’s cross in the fourth minute but his header went past the right post.

But Charlton’s burst of activity in the final third did not last. Shrewsbury were happy to play on the counter and twice broke dangerously from defending corners. On the second occasion Nolan did little wrong – even checking inside his marker – but his strike came off a home player to go for a corner.

The first effort on target came in the 29th minute. Bryn Morris forced Ben Amos to push around his left post for a corner, but it was a save you expected the on-loan Bolton stopper to make.

Carlton Morris went into the referee’s book for leaving a late challenge on Jason Pearce. The Addicks captain was unlucky not to get a touch on a Forster-Caskey free-kick which had already been flicked on by Magennis.

Shrewsbury were happy to slow the match down with keeper Dean Henderson just about staying in referee Simon Hooper’s good books in the opening 45 minutes despite whiling away some extra seconds with his goal-kicks.

The second half was even more attritional than the first period and in a game where there had not been a period of dominance for either side, Town began to look the stronger but again without fashioning a whole lot to note down.

Bowyer did make a change with Tariqe Fosu replacing Mavididi, whose time out with a hamstring injury seemed to have him flagging even fairly on in the contest.

But there were not enough moments of danger from Charlton, especially when their build-up play was not quick enough.

Ben Reeves struck over after a neat lay-off from Nicky Ajose while Forster-Caskey produced a tame free-kick which glided straight into Henderson’s arms.

Magennis got a good connection on a Forster-Caskey cross but Henderson dropped to his left to make the save.

Shrewsbury took first blood on 80 minutes. Stefan Payne’s header bounced just outside the box and Nolan showed excellent technique to smash a right-footed half volley past Ben Amos, the ball coming down off the underside of the bar.

Ajose did crank a Konsa delivery from the right over and that errant finishing, even if it was a difficult chance, summed up the way Charlton failed to click offensively.