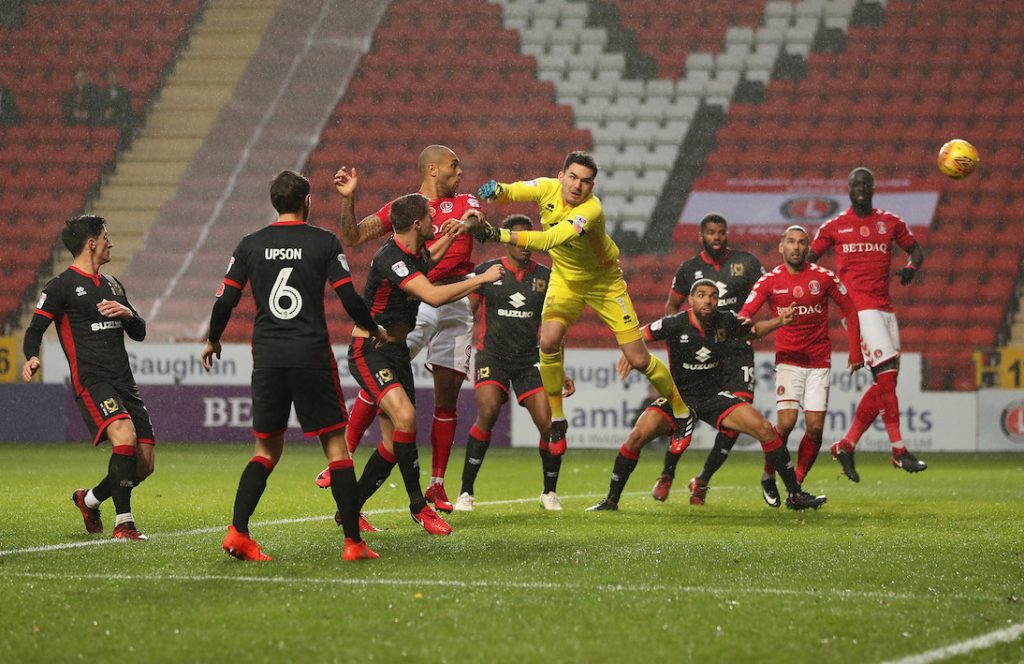 There are times – and it’s an experience not exclusive to Charlton – when a draw feels more like a defeat. Saturday’s controversial late mugging by generally outclassed Milton Keynes qualifies as one of those times, writes Kevin Nolan.

The visitors rode their luck – never more crucially than when Jake Forster-Caskey’s deflected drive boomeranged wildly to safety off the inside of a post shortly after Magennis opened the scoring – but their hosts got what they deserved if only for their chronic reluctance to finish off wounded opposition. That much debated “second goal” continues to elude the Addicks and leaves them vulnerable to disasters like this one.

And, make no mistake about it, the result of this tetchy, occasionally violent game was a disaster. Or, put more colloquially, a kick in the unmentionables.

Emerging from a three-week break in league action, it was disturbing to discover that Charlton were required to cope on Saturday without an unfit Patrick Bauer. Quite why it was considered wise to risk their pivotal centre-back in a meaningless EFL Trophy frivolity against Portsmouth – which also deprived them of top-scorer Tariqe Fosu – stretches understanding. Because almost certainly, with hugely influential Jason Pearce already hors-de-combat since September, it’s safe to say that Bauer’s absence cost Charlton two priceless points.

Standing in for Pearce and Bauer were Ezri Konsa and Naby Sarr, enviably talented players and, in the former’s case, one destined to attain future glory and greater financial reward elsewhere. Both replacements are casual ball-playing defenders relying on their languid skills to get out of trouble but too often creating problems of their own making. In the hurly-burly of League One, it’s  fatal to kid yourself that there’s more time than there actually is. It leads to complacency and proneness to error. Something the more pragmatic Pearce and Bauer are at pains to avoid.

Charlton were leading through Magennis’ early goal but beginning to wobble when Robbie Neilson replaced the haplessly ineffectual Ryan Seager with Kieran Agard who, it was surprising to learn, hadn’t scored this season. Five minutes later, the substitute opened his account by beating Sarr in the air before expertly heading Scott Golbourne’s perfect cross inside the right-hand post. It’s doubtful whether aerial powerhouse Bauer would have succumbed so meekly.

Karl Robinson’s anger at the visitors’ first equaliser was directed at high-stepping, spectacularly incompetent referee Andy Woolmer for missing the obvious foul by George Williams, who cleaned out Ben Reeves during the build-up. He would have been even more cross had Chuks Aneke made more of the golden opportunity gifted him by Konsa’s carelessness. With only Ben Amos to beat, Aneke’s wild shot ended up nearer the corner flag than the goal.

Re-doubling their efforts, the Addicks should have regained their lead but Sarr feebly shanked Jay Dasilva’s precise centre at Lee Nicholls from six yards. Charlton came again through Ahmed Kashi, whose driving run spreadeagled MK’s central defence and set up Fosu to try his luck with what started its journey as a shot but might equally have served as a cross. Golbourne resolved the dilemma by cushioning an impressive left-footed volley past a startled Nicholls.

That was that of course, except that the deflated visitors had a final shot in their locker. And it was delivered successfully from the penalty spot after Kashi was adjudged to have tripped Peter Pawlett. Contact, if any, was minimal but Robinson’s objections rather missed the point that Kashi, as part of a three-man posse ushering Pawlett away from goal, was unwise to lunge at the ball anyway.

Discretion, not aggression, was advisable and Charlton’s gang-tackling methods, so admirable in other areas, should have been sensibly reined in. Dithering Woolmer was predictably caught in two minds but his linesman, some 30 yards distant, made up both of them for him. Following the usual furore, Agard made cool work of converting the spot-kick.

Much earlier, tireless lone wolf Magennis had notched his fifth goal of the season by losing marker Scott Wootton and nodding Jake Forster-Caskey’s inswinging corner from the left over Nicholls into a gaping net.

Magennis also supplied the exquisite ball which sent Mark Marshall through to face Nicholls early in the second half.

Nicholls deserves credit for alertly narrowing the angle to block Marshall’s shot but it was a missed chance and provided further evidence of Charlton’s inability to put games out of reach of inferior opponents. Magennis could use a little help up front from, for instance, the predatory likes of old stager Bret Pitman, who made it 10 for the campaign by scoring the winner for Portsmouth against Southend. Pitman contributes little outside the opposition penalty area. But he comes alive inside one where it matters. They call ’em goalpoachers – and Charlton sorely need one right now.