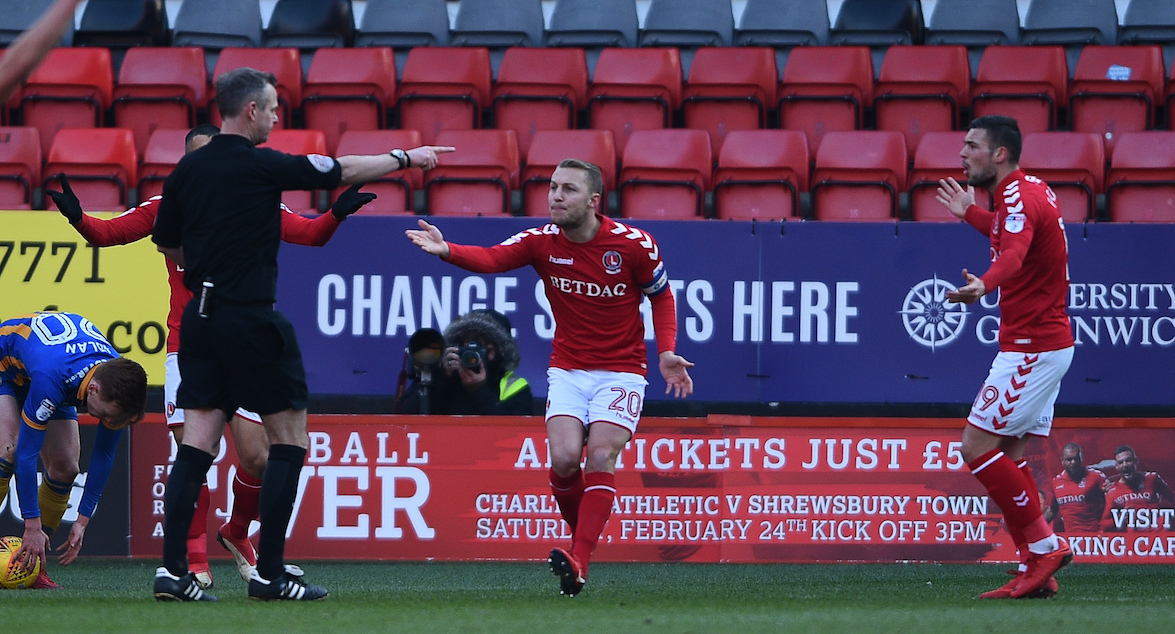 Charlton once again failed to perform in front of a large crowd as they slipped to a 2-0 defeat against promotion-chasing Shrewsbury.

Over 17 and a half thousand squeezed into The Valley as ticket prices were slashed to just five pounds for today’s game, but they were left short-changed as second-half goals from Alex Rodman and Omar Beckles secured the win for Paul Hurst’s men. It is the fourth time in a row that the Addicks have been beaten when five pound tickets have been offered to supporters.

Ben Amos’ first-half penalty save from Jon Nolan ended up counting for nothing.

The Addicks were off to a flying start. Josh Magennis’ low-cross deflected into the path of Jake Forster-Caskey, who saw his effort blocked by defender James Bolton eight yards out. Magennis himself then saw a diving header repelled by the feet of Salop goalkeeper Dean Henderson, who then jumped back up to tip Joe Aribo’s volley over the crossbar – all of the above coming in a frenetic opening three minutes.

The visitors survived that early scare before beginning to grow into the game – and they should have led on sixteen minutes. Ezri Konsa hauled Nolan down in the area, with the referee pointing straight to the penalty spot. Nolan stepped up himself, but his tame effort was kept out by Addicks stopper Amos, with the Shrewsbury man’s headed rebound then smacking against the crossbar before the home defence eventually hacked the ball away to safety.

Paul Hurst’s second-placed Shrews enjoyed the lion’s share of possession for the rest of the first-period but only had Carlton Morris’ far-stick volley that flew off target to show for it, as we entered the interval goalless.

Shrewsbury’s dominance continued at the start of the second-half and they edged ahead seven minutes into it. Shaun Whalley had already curled just beyond Amos’ far-post from distance, but teammate Rodman was more precise with his shot from outside the area – the ball arrowing in via a the woodwork with Amos beaten all ends up.

Karl Robinson introduced Tariqe Fosu from the bench for the final half an hour as he looked to summon a reaction from his lacklustre side – but their task was made even harder as the visitors doubled their lead.

Beckles was able to win a header eight yards out as a corner was floated into the Addicks box, forcing the ball home through a crowd of bodies.

Charlton looked devoid of ideas and could have gone further behind when Whalley placed an effort wide from just eight yards out as a ball into the area was half-cleared straight to him.

Fosu fired an ambitious drive just over the bar from distance, but apart from a late melee that saw Magennis shown a yellow card as pushing and shoving broke out following a strong Ahmed Kashi challenge, the Addicks failed to make any more meaningful contributions to the game.