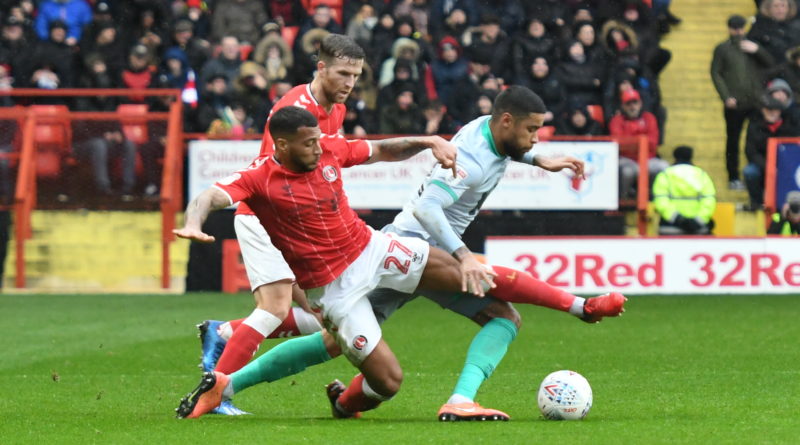 Charlton’s five-game Championship unbeaten home run came to an end as Blackburn Rovers took all three points at The Valley.

First-half goals from John Buckley and Tosin Adarabioyo silenced the sold-out home stands as fans flocked to SE7 to take advantage of a special offer on ticket prices.

The result leaves the Addicks five points above the Championship drop-zone as they fail to build on Tuesday’s win at promotion-chasing Nottingham Forest.

Lee Bowyer made just the one change from the side that earned that impressive 1-0 win at the City Ground, with Aiden McGeady given his first Addicks start in place of Erhun Oztumer.

Charlton, roared on by a sold-out home end at The Valley, started on the front-foot. Both Lyle Taylor and Tomer Hemed saw drives blocked by visiting stopper Christian Walton inside the opening five minutes.

Rovers had one just once in five in all competitions on the road before arriving in South London but soon started to gain a stranglehold on the contest. They had what looked at first decent shout for a penalty turned down as Jason Pearce tangled with Dominic Samuel. Referee Andy Davies instead pulled the move back for an earlier foul on the Charlton skipper – but Tony Mowbray’s side did have the lead just before the half-hour mark.

Buckley was fed into space on the left, where he cut inside and fired an effort from the edge of the area that took a wicked deflection to wrongfoot Dillon Phillips.

It took just eight minutes for the visitors to extend their advantage. Tom Lockyer was harshly penalised after what looked a fair challenge inside the Addicks half. Stuart Downing whipped in the resultant set-piece, with Adarabioyo able to drive the ball home unchallenged from six yards out.

Walton reacted well to tip over Taylor’s close-range header as the hosts looked for one back before the interval – but the Addicks were forced to regroup at the break.

Bowyer took off defender Jason Pearce and switched from a back-three to a 4-4-2, Man City loanee Matt Smith coming on to bolster the midfield.

The former QPR man was involved immediately as his drive ricocheted through to Walton, with the Blackburn stopper punching a Taylor free-kick clear soon after as well.

Andre Green replaced Tomer Hemed with half an hour remaining and he created an opening for Aidan McGeady soon after – the Sunderland loanee’s shot looping over off a defender.

Macauley Bonne made his return from injury in place of McGeady as we entered the final twenty minutes.

Taylor came close once more with a free-kick, before Josh Cullen’s rasping shot was tipped away as the home side were unable to find that goal to give them hope in the closing stages.