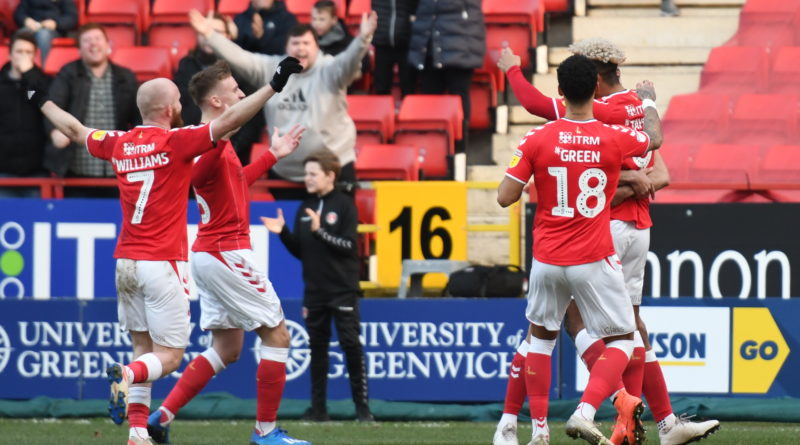 Charlton held on for a valuable three points in their battle to avoid the drop as two first-half goals were enough to see off fellow strugglers Barnsley.

New majority shareholder Tahnoon Nimer was in town to see Lee Bowyer’s men race into two-goal lead at the break thanks to strikes from Lyle Taylor and Andre Green.

Cauley Woodrow pulled one back with twenty minutes to go but Charlton held on despite some nervy moments in the closing stages.

The Addicks now boast a nine-point cushion over the Tykes, but still sit just four points above the drop zone after Wigan’s surprise win at Elland Road.

Nimer was in his seat for kick-off and didn’t have to wait much longer to see his side take the lead.

Barnsley have often looked vulnerable from set-pieces this season and it was another dead ball that led to Charlton’s opener. Josh Cullen floated a free-kick into the area, where Jason Pearce flicked it on for Taylor to beat the offside flag and prod beyond Samuel Radlinger – an 8thgoal of the season for the frontman. The hosts seemed in control but did have to be bailed out by a fine save from keeper Dillon Phillips as Mads Anderson powered a header towards the bottom corner – Aapo Halme was flagged offside before his rebound hit the upright.

Michael Sollbauer, making his league debut for the Tykes, had earned an early yellow card for a foul on Jonny Williams and was lucky to escape a second booking after two fouls on Taylor before the break – but there was further bad news for Barnsley boss Gerhard Struber before the interval as the Addicks doubled their advantage.

Again, a set-piece wasn’t dealt with by the visitors, with Green pouncing on the loose ball to drive home his second goal in Addicks colours.

Charlton were in charge at the break but their lead was nearly halved soon after the restart. Phillips adjusted well to make an unorthodox save from a 25-yard drive, but the rebound fell straight to Cauley Woodrow – who could only rattle the post from inside the penalty area.

Williams had been down for treatment for a knock on his ankle and was substituted after playing on for a few minutes in what will hopefully just prove a precautionary move. Jake Forster-Caskey took his place.

Lyle Taylor soon made way as well for Tomer Hemed – with Barnsley then back in it soon after. The Tykes broke over the halfway line, with Luke Thomas slipping it wide to Woodrow, who fired across Phillips and in.

All hell then seemed to break loose in the Charlton backline. Barnsley rattled the bar and saw a shot cleared off the line by Forster-Caskey in the space of just a few seconds before the visitors also forced a couple of corners in quick succession – but they were unable to find a leveller.