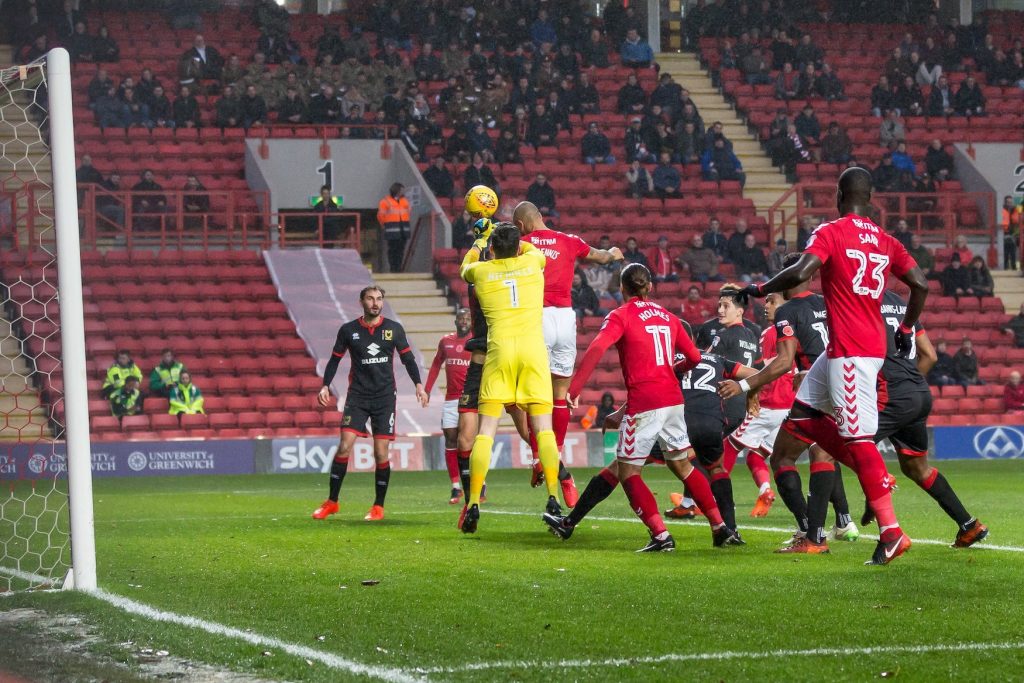 Charlton were held to a draw at The Valley by Milton Keynes after an action-packed encounter. A Scott Golbourne own-goal seemed to have gifted the Addicks a deserved win late-on, only for Kieran Agard’s last-minute penalty to rescue a point for the visitors.

Robinson’s men got off to the perfect start on six minutes. A superb passing move found space for Jake Forster-Caskey on the right-hand side of the Milton Keynes penalty area. His cross was turned behind, but from the resulting corner  Josh Magennis rose highest to nod beyond the goalkeeper and edge his side into a lead.

The Addicks dominated the early stages and came close to doubling their advantage throughout the opening twenty-five minutes. Ahmed Kashi, Ricky Holmes and somewhat unexpectedly defender Naby Sarr all came close from distance, with the later forcing keeper Lee Nicholls into a smart save to repel his rising drive.

Forster-Caskey was millimetres away from that elusive second-goal on twenty-four minutes. Ben Reeves laid him off on the edge of the area and his effort deflected onto the inside of the post before rolling agonisingly across the face of the goal.

The midfielder then headed over after Ezri Konsa nodded a corner back across goal before the visitors finally had a sight of goal ten minutes before the interval – Peter Pawlett’s shot deflected wide from the edge of the area.

The South Londoners began the second-period with further intent and wasted another great opening as Mark Marshall was denied one-on-one by Nicholls after bursting through a static visiting defence.

Milton Keynes manager Robbie Neilson made all three of his substitutions in quick succession early in the second-period to try and change the game and it paid almost instant dividends.

Fresh off the bench, Agard rose highest at the far-post to head the visitors level just beyond the hour-mark.

Appeals for a Charlton penalty were waved away after Ben Reeves’ shot appeared to hit a hand, before Chuks Aneke wasted a glorious chance to fire the visitors ahead – he was wildly off target when clean through twelve yards out.

Milton Keynes had much more of a foothold in the game now but the Addicks regrouped to go in search of a winner. Holmes forced a couple of corners before Sarr missed a huge opportunity to edge his side back ahead. The defender lurked in the area after a corner was cleared and sprung the offside trap as the ball was lofted back in. However, his volley lacked conviction and was easily saved.

Charlton thought they had won it in farcical style three minutes from time. Ahmed Kashi released Tariqe Fosu in the box. He shanked his effort well wide but Goldbourne stuck out a boot to divert the ball into his own net.

However the joy was short-lived, with the referee awarding a penalty to the visitors in the final minute of normal time after Pawlett went down under a challenge from Kashi – although replays showed there seemed to be minimal contact. Agard buried it for his second of the game as Robinson had to settle for a point against his former side.

One thought on “Charlton Athletic 2-2 Milton Keynes: Points shared after late drama at The Valley”