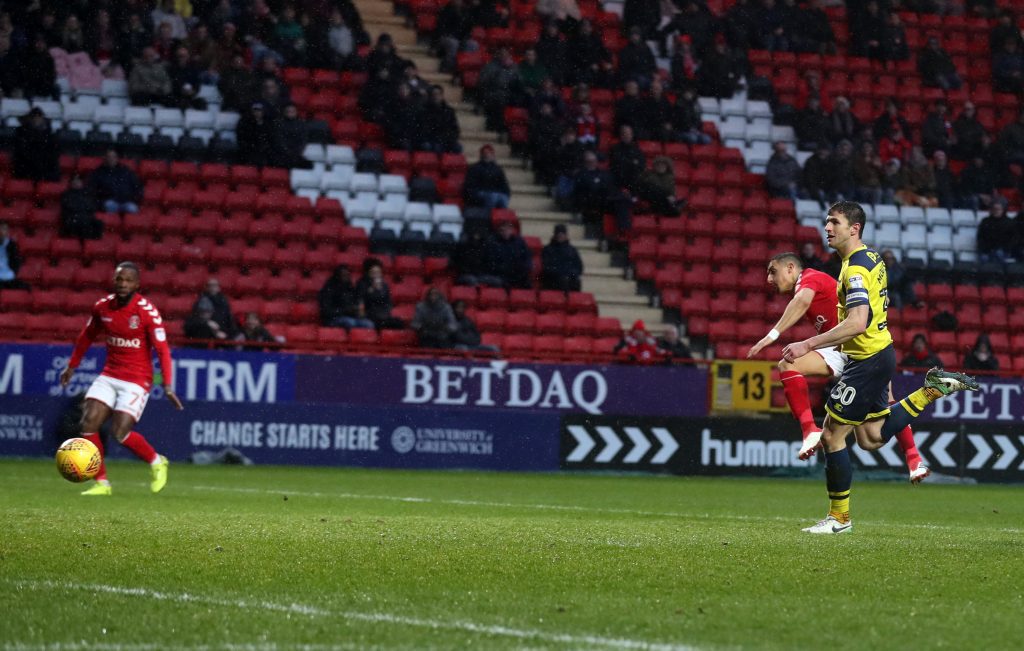 Charlton were left shell-shocked as two late goals earned an unlikely victory for Oxford United at The Valley.

Josh Magennis’ strike twelve minutes from time that restored the Addicks’ lead looked like it would be enough to earn victory. But Todd Kane’s leveller and Ryan Ledson’s winner turned the game on its head in its closing stages.

Ahmed Kashi had put the South Londoners ahead midway through the second-half, only for James Henry to haul the visitors onto level terms.

Tariqe Fosu, making his first start since returning from three months out injured, performed like he had never been away in the opening exchanges and forced about the first save of the game – Simon Eastwood stretching to keep out a drive from the edge of the box.

Mark Marshall soon headed wide from Arsenal-loanee Stephy Mavididi’s floated ball in as the Addicks put their visitors under sustained pressure early on.

The managerless visitors nearly took the lead against the run of play though when former Addicks loan-man Jonathan Obika, who was a late addition to the starting line-up for Oxford, rattled the crossbar from the edge of the area with Ben Amos beaten.

Fosu was once again involved as he couldn’t quite find a touch to divert Josh Magennis’ deep cross towards goal. Obika headed a corner wide at the other end but that would prove to be his last real involvement in the game, as he soon hobbled off injured.

Charlton seemed to lose a bit of tempo as they approached the interval, but they looked to get back on the front-foot at the start of the second-half.

The ball fell nicely for Fosu on the edge of the area and he slipped Magennis in on goal, but the Northern Irish international’s low-shot was turned around the near-post by Eastwood.

Malachi Napa drew a smart save from Ben Amos as chances were few and far between in the early stages of the second-period – but one was eventually taken but an unlikely man.

Perseverance from Fosu and Magennis created the opportunity for Kashi to burst into the penalty area and give the Addicks a 63rd minute lead.

Mavididi was soon forced off with a knock but January loan signings Sullay Kaikai and Michal Zyro both came on to make their Charlton debuts, with Mark Marshall also making way.

Charlton were hit with a sucker-punch as the visitors drew level in the final fifteen minutes. Former Millwall man Henry curled home from the edge of the area to silence the Addicks faithful – but they were soon on their feet again as their side reacted in the best way possible.

Jay Dasilva burst into the Oxford area and squared for Magennis to bundle home his first goal in fifteen appearances – a weight off of his shoulders and a lead once again for his side.

But Robinson’s men couldn’t hold on, with Kane sweeping home in the final minute of normal time before Ledson’s late, late winner – with the Charlton defence missing –  sentenced the Addicks to a first league defeat in four.