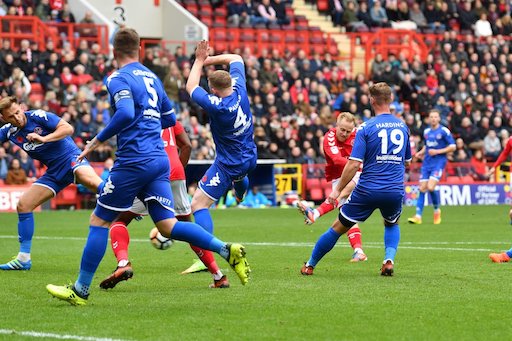 Charlton survived a scare in the second-half to see off National League South side Truro City in the FA Cup first round.

A brace from Ben Reeves and Mark Marshall’s first Charlton goal secured a 3-1 win, after Tyler Harvey’s header had halved the deficit to make it 2-1 on the hour mark.

The White Tigers, who sit 76 places below Charlton in the league pyramid, had the first half-chance of the game as Aaron Lamont fired at goal from range rebounded off his own man and trickled through to Ben Amos in the Addicks goal.

Jake Forster-Caskey floated a header against Truro’s crossbar from Ricky Holmes’ cross before Amos was called upon again at the other end – reacting well to hold Tyler Harvey’s nod at goal.

The Cornish side’s rear-guard was breached after just ten minutes. Jay Dasilva’s cross was collected by Reeves on the edge of the area and he drilled home for his third goal of the campaign, all of which have come in cup competitions.

The goal may have knocked the stuffing out of the non-leaguers but that wasn’t to be the case. Noah Keats, whose brace at Hampton and Richmond earned Truro’s place in this round, shot at Amos from distance before the part-timers came agonisingly close to levelling the scores.

A corner routine saw the ball pulled back to Harvey, only for the Plymouth-born striker to see his deflected shot cleared off the line by Chris Solly.

Holmes’ half volley flew over the bar for the Addicks and Jake Forster-Caskey’s drive was turned around the post by McHale as the South Londoners struggled to find a second goal in an even first-period.

That second strike did come early in the second-half. Marshall cut from the right and his left-footed shot took a huge deflection to wrong-foot McHale and nestle high in the net.

Holmes and Marshall both tested the Truro goalkeeper from the edge of the area, before the National League South side halved the deficit.

Twice in quick succession Harvey saw shots repelled by Amos, but it was a case of third time lucky as he planted a header into the bottom corner and send the 996 travelling supporters into raptures.

Charlton’s two-goal advantage was restored eleven minutes later after excellent link-up play between Holmes and Reeves, with the latter firing home via the outstretched glove of McHale.

The visitors continued to battle – even hitting the crossbar in injury time- but left spaces at the back. Tariqe Fosu and Forster-Caskey both came close to adding to Charlton’s three goals late on but those strikes proved to be enough as the Addicks secured their place in the hat for the second-round draw.