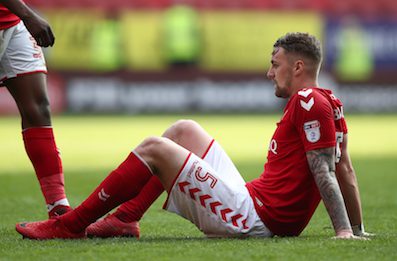 The Addicks have already rejected a bid from Blackburn Rovers for German defender Patrick Bauer, 25.

And Northern Ireland international Magennis, 27, was the subject of more than one offer from Bolton Wanderers in the January transfer window.

Both men have just under 12 months to run on their current contracts and Bowyer says he can make no guarantees that either will still be in Addicks colours when they start their League One campaign at Sunderland on August 4.

Forward Igor Vetokele is back with Charlton after spending the last two seasons on loan at Sint-Truiden and Zulte Waregem. His high wages – he was a marquee signing from FC Copenhagen in July 2014 – make it likely he will be moved on.

“I honestly don’t know what will happen with Igor. He has worked hard and if he stays it is a bonus – and if he goes then wherever he ends up he will be fit. If he is in the building at the start of the season it will be like a new signing but if he goes then I understand the reasons why, I get it.

“A deal could be done within 24 hours, if someone comes in with the right offer. That happens all the time.

“Do I expect them [Magennis and Bauer] to still be here [at the start of the season]? I honestly don’t know. But they are both good lads and are working hard.

“It is very difficult for Pat, because they [Blackburn] came in and put an offer on the table for him. He wants to play at a higher level, I get it.

“He understands – £300k, I can’t replace him for that. The owner is like ‘why would I sell you for that? I think you’re worth a lot more.’ It’s not going to happen. Unless they come in with any more Pat then you’re going to be here’. I’ve told him: ‘You need to get your head right and get your fitness right, in case you’re still here’.”

Bowyer was unable to provide updates on the contract offers made to winger Tariqe Fosu and midfielder Joe Aribo.

He said: “I know they have been offered but I don’t know what the plans are – that is between the owner, the agent and the players. I don’t get involved in all that.

“I only say who I think our assets are, I was asked who are assets are, and I told him [Roland Duchatelet] that. I’m sure something will get sorted at some stage.”