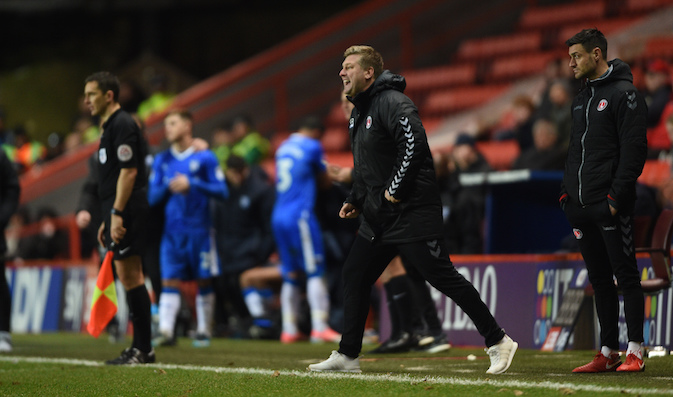 Karl Robinson has expressed doubt over whether Charlton Athletic are going to be able to bring in more signings this month – admitting the takeover talks are impacting on his own plans.

Arsenal striker Stephy Mavididi moved to SE7 on loan yesterday but that deal was agreed before Katrien Meire stepped down as chief executive to take on the same role at Sheffield Wednesday.

Owner Roland Duchatelet has already stated he will not replace Meire as negotiations continue over selling the South London club.

And Robinson was hardly upbeat when discussing the possibility of further additions. His striker options have been cut with Leon Best out for up to a year with a serious knee injury.

“We’re in a difficult place. I think we need to know what’s going on. We’ve been told they are looking to sell the club – I don’t have much clarity on that.

“I’ve got six players I want to bring in and four would walk in this door tomorrow if they could.

“Richard [Murray] is my first port of call.But also due-diligence is going on. There are so many things going on.

“I don’t think anyone knows whether it [the takeover] is two weeks, four weeks or the end of the season. I want to get promoted, that’s what I want.”

When asked if the takeover talks were a big factor, Robinson replied: “Obviously. If you want to buy it, buy it. Trust me, this is a great club to buy and you’ll be a hero as soon as you walk through the door. And we can get on with business.

“In some ways there is clarity – but also none, if that makes sense. All I want is to bring in players and be successful. We only needed one or two before we got all these injuries – we probably need three or four now.

“I’ve played the young players – they have been given an opportunity – and I have spent very little, minimal in comparison to what has been done before. Players have gone and I’ve dealt with it because it has been for the benefit of the football club. I’ve stuck to my principles and beliefs.

“I’ll never give up. My job is to do the best for this football club. I know what we need – it’s clear now where I need cover and players. You could probably watch a few minutes and say what we need.

“Steve Gallen [head of recruitment] has worked around the clock. He has met agents, met players. So we are just gearing up – maybe things happen quickly and we can press buttons. That’s what we’re going to be hoping for.

“That [Mavididi] was done a few weeks ago.

“I’ve loved every second of being here. I’ve really put my heart and soul into it – so have my staff. But this club needs something quick. From what I’m hearing, we don’t know where we’re at.

“I’ve had very clear guidance on everything going on [before the takeover situation]. The fact people criticise X, Y and Z it has been ‘no, you can’t have that’, ‘yes you can’. I’ve not been interferred with, nobody has picked the team. Everything they said they have done.

“Does it [the talks] have an effect in January? Yes, 100 per cent. You only have one chance in modern-day football. We have 31 days. I’m not here to finish mid-table.

“If we don’t sell it then you’ve got to keep going. People still want to pay money and come to games. We’ve got a job to do.

“No-one is going on loan until I get people in. Why? Why let Josh [Umerah] or Karlan [Ahearne-Grant] go on loan if I’m not too sure that I can bring anyone in? At the moment we have got one fit striker in the whole of the building.”