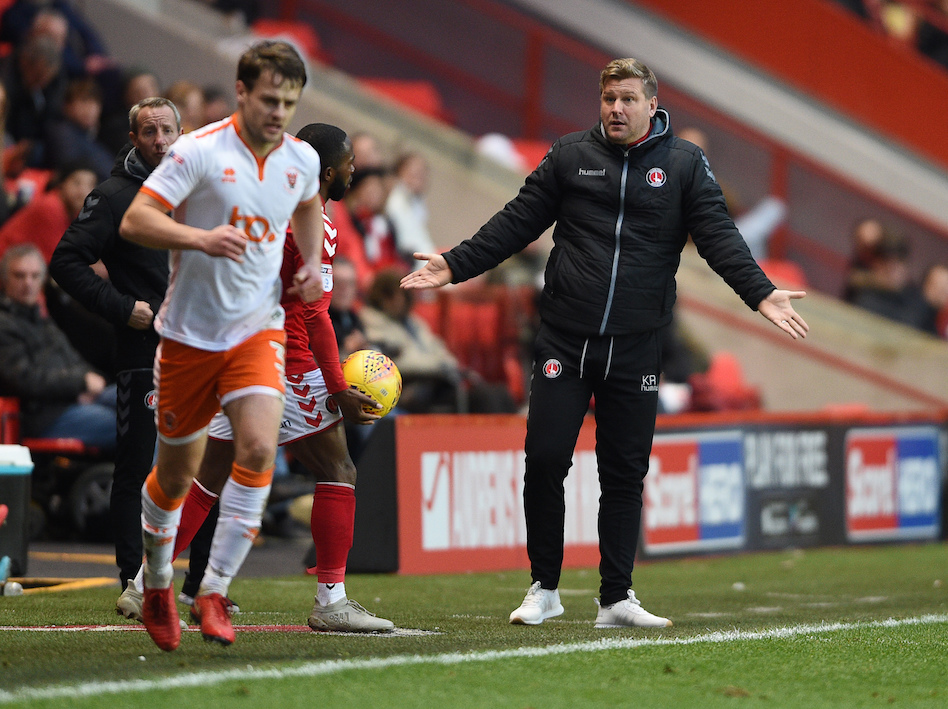 Clark Robertson grabbed a late equaliser for Blackpool and the Addicks chief was left unhappy at the free-kick which led to the leveller.

“I’m not saying we were great – far from it,” said Robinson. “But when we haven’t been great we have defended very well and limited them to very few chances.

“But if the referee keeps giving a team an opportunity to get the ball into the box then something might drop for you.

“I thought the referee was atrocious.

“I won’t start telling my players to dive. I want to show you the free-kicks we have conceded goals from this year which haven’t been free-kicks. It’s diabolical. As soon as they’ve got touched they go over.

“The ball drops and Anfernee Dijksteel has minimal contact [for the foul] and their player goes to ground because he realises he can’t get the ball – they get a free-kick and score from it. We can talk about how we defended the free-kick but it is hard – you are making substitutions and it is not the players you want to.

“The referee did everything he could today to get them the ball in the box as much as he possibly could. I’m not happy at all with the referee’s performance.

“What’s the point? [of going to see the referee]. He’ll just massage my ego and say he’ll look over the game again – he can stuff looking at the game again now. Just do your job right. I’m sick of it. Our fans can’t learn from it and ask for a refund because of  his poor performance. They have to be accountable for their performance.

“Our own set-pieces were diabolical.

“We lost a bit of fluidity but with youth you are going to have that.”

Blackpool boss Gary Bowyer – when asked about Robinson’s comments on Busby – said: “I agree with him. But I think he made more than a few atrocious decisions.

“My players felt we were denied a clear penalty.

“They are what you are – you win some and you lose some.”