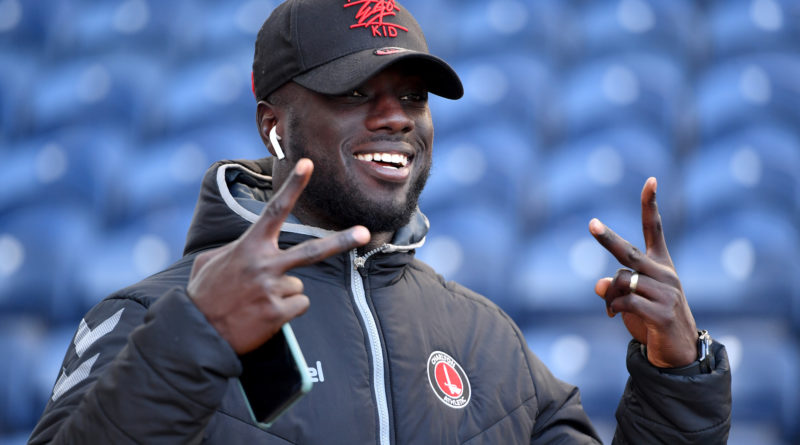 Naby Sarr is set to get a contract offer from Charlton Athletic – with manager Lee Bowyer confirming he wants the French defender to stay in SE7.

The 26-year-old is out of contract at the start of July and is the top earner at the Championship side – one of Roland Duchatelet’s most expensive outlays during his ownership.

Sarr provided the assist for Lyle Taylor’s winner at Nottingham Forest on Tuesday night – breaking down the left flank and crossing for the striker to volley emphatically home.

Both men are due to be free agents this summer.

Bowyer has also revealed that there are other factors which could persuade Taylor – the quickest to reach 30 league goals for the Addicks since Arthur Horsfield in the 1972-73 season – to commit.

Asked about Sarr, the Charlton chief replied: “I would love to keep him. When we play well, Naby is playing. That’s because when we pass the ball well it starts from the back.

“So many of the goals we’ve scored have come from passing out from the back and Naby is involved a lot of the time because he is very comfortable on the ball.

“Yeah, he makes mistakes – but all defenders do. You watch the Premier League and they make mistakes. If no-one made mistakes there wouldn’t be any goals. I’d rather it not be our defenders, but that’s the game. It’s about limiting those mistakes.

“He is good for our squad and different to the other centre-halves that we have – left-footed. There are not many out there.

“I like him as a person. He is a lovely fella and great around the place.”

Taylor made it nine goals in 17 appearances this season to earn Charlton a vital victory at the City Ground.

When Bowyer recently signed a new long-term contract he stated at the time he would be holding talks with the former AFC Wimbledon frontman.

“I chatted with him because being selfish I need him to be at it for us,” he explained. “He is at our football club, plays for us and needs to do well.

“When I said I needed to speak to him it was to drum in that he needs to do well for his own career.

“Everyone was worried he might not turn up but I knew he would, because he is a good lad and he cares.

“If he goes in the summer, he goes. Unfortunately I’m not able to control that.

“Unless we give him a really good contract, whether you like it or not all the teams are interested in him. That’s what happens when you do well.

Charlton are in discussions with goalkeeper Dillon Phillips and left winger Alfie Doughty about contract extensions.

Phillips, who came through the club’s academy, sees his terms run until the summer of 2021.
The stopper is already over the age of 24 and that means they would lose him for nothing if he chose to take on a new challenge.

Phillips has made the most saves in the Championship – averaging 3.4 per game.

Doughty, 20, also has 16 months left to run on his Valley deal but Charlton would be due compensation if he did not agree a fresh pay package. Fulham’s interest was rebuffed in the January window.