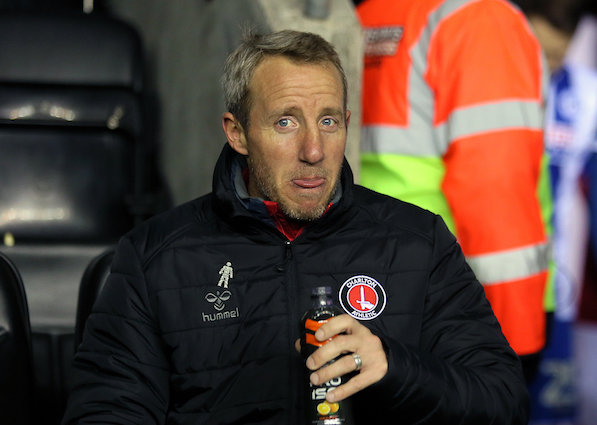 Lee Bowyer takes charge of Charlton Athletic tomorrow for their crunch League One clash with Plymouth Argyle – in a caretaker capacity after Karl Robinson quit on Thursday morning.

He sat down to chat with the media today. Here are his views on a number of subjects.

“We just wished each other luck. He has left for his own reasons, whatever he will tell everybody. He’s gone, I’m here and I’ll move on and the club moves on. That’s what happens in football.

“I said to him he had left the team in a good position. You can walk away with your head held high.

“I’m here until told otherwise. I don’t know how long that will be. Hopefully it will be until the end of the season.”

“Ask me at the end of the season. At the moment this is what I’m going to be doing and I’m excited to be doing it. To show what I can do on this side. Coaching is different, you make the players improve as individuals to make the team better – I think I’ve done that since I’ve been here. Now it’s tactically what I think. That’s what I’m looking forward to.

“I’m grateful to be given a chance. This is where I started as a player and now my first taste of management. I’m just looking forward to Saturday.”

“Whatever is happening off the pitch is irrelevant.”

HARRY KEWELL – A FORMER LEEDS TEAM-MATE LINKED WITH THE JOB

ON AMBITIONS TO BE A MANAGER

“I had no intention of being a manager. I had no intention of being a coach. When I finished playing football I had five years out. I enjoyed that time. I went with Harry to Watford for six weeks to help him out with his under-21 side. And that gave me the taste of that winning thing again and being around football again. It’s crazy how I’m sitting here now. I literally came in [at Charlton] two days a week – just to help out with the midfielders. Richie Barker [assistant] left in the summer and Karl asked me to be assistant.”

“I wouldn’t say it is a must-win – no. We have still got 10 games to go and there are 30 points to play for. I’d say we need to win a minimum of six, probably seven. But I am looking to win tomorrow. I’ll be setting out the team to win. Everyone will be giving 100 per cent, because I won’t accept anything else.”

STRANGE TIME FOR ROBINSON TO LEAVE

“It is a strange time, Karl will agree with that himself. Karl had his reasons, that’s down to him to explain them. It would be unfair for me to do so. I just need to concentrate what I’m doing here with Jacko’s help, get this team into the play-offs and promotion. What happened yesterday is old news.”

“No it’s a challenge. I love challenges and I love to win. I’ll be putting all my concentration and knowledge into doing so.”

“I’m not a big talker. I will talk – but I’m not a shouter, believe it or not. Unless something goes horribly wrong. They are adults and some of them have been in the game long enough. They’ll get the message how I want to play, I’m sure they’ll deliver.”

WANT TO HAVE MORE CONTACT WITH THE OWNER THAN ROBINSON DID?

“No, I don’t think you need contact with the owner, unless it is in and around the transfer window.”

“I know I can do it, it’s just whether I wanted to do it. And now I’m going to be doing it. I know I’m capable of doing this. I’ve worked with five, six international managers. If I never learnt anything off them, what have I been doing with my career? And a hell of a lot of unbelievable players – you learn with one you play with and against.”

“There is no uncertainty for the players. They are paid to play football. They are not paid to worry about what is happening off the pitch. There is going to be no interference with them or their preparation.”

“Stopped scoring goals, stopped creating chances and leaked too many. It’s all about what happens in the two boxes. We’ve not been taken our chances, and that’s been most of this season. It’s down to the players on the pitch – and attitudes. At times they have come off the standard they set earlier in the season. I said yesterday, I won’t accept that – any individual playing for themselves. It’s a team game and anyone who thinks they can just stroll around they are mistaken.”