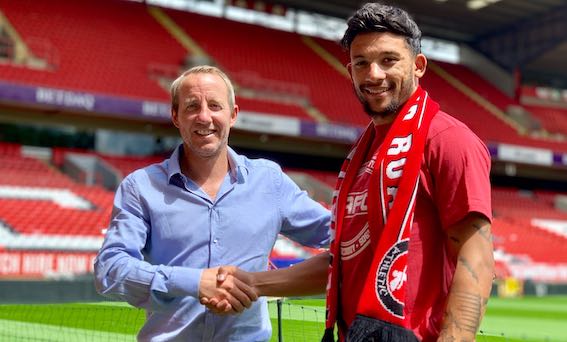 The forward, 23, has signed a three-year contract. The Addicks paid in the region of £200,000 for the Zimbabwe international, who scored 45 goals in two seasons with the National League champions.

Bonne is the club’s first signing of the summer transfer window.

The Addicks are looking to bring in at least two front players with Lyle Taylor the only established striker on their books. Igor Vetokele and Josh Parker were released at the end of last season.

Bonne told the club’s website: “I’m delighted to be here now, it’s been something that’s been on the cards for a while now and so I’m delighted that it’s over the line.

“Seeing how they’ve had a young team for the past two seasons and they’ve managed to get where they have with the youth in there. I thought it was the best move for me to progress and become a better player.”

Bonne is the first cash signing made by Charlton boss Lee Bowyer.

“If you don’t score goals, you don’t win games,” said the Addicks chief. “We did the same thing last season with Lyle [Taylor], he was our first signing and Macauley’s ours this summer.

“We have to get people in that are going to do things in the attacking third, that’s what we’re focusing on and what we’ve been focusing on for a long time.

“Steve Gallen [the club’s head of Recruitment] has been looking at him for two years, so it’s been something that we’ve been keeping an eye on and now it’s the right time for him to come to us.”

Gallen added: “Macauley’s been part of the team that won the National League, and he’s scored a lot of goals and as I say he’s someone who we’ve been watching for a while. The manager and I talked about him in January as a potential replacement for Karlan [Grant] at that stage to see if we could do it. We couldn’t at that stage, but we’re now really pleased to get him.”

Ipswich-born Bonne made his professional debut for Colchester United in 2013. After loan spells at Lincoln City and Woking, he joined Orient in 2017. The striker netted 23 league goals in his first season and 22 in the last campaign.