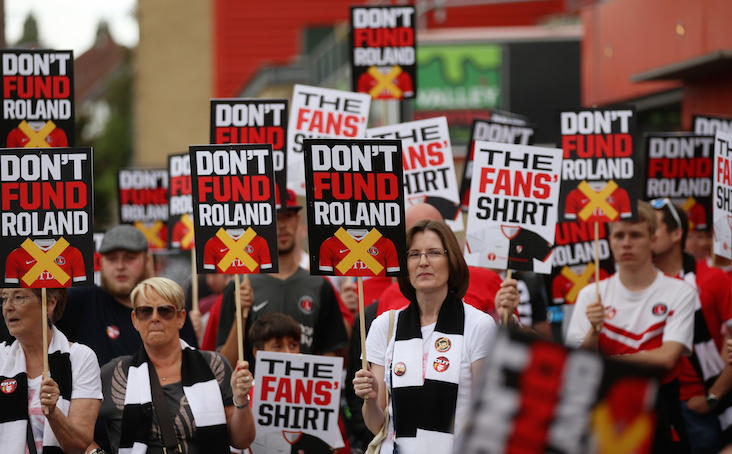 Charlton fans are being urged to demand answers about the club’s immediate future by rallying outside The Valley’s west stand before Saturday’s home match against Walsall.

The Coalition Against Roland Duchatelet (CARD) is asking Addicks supporters to assemble outside main reception by 2.15pm, when they will call on director Richard Murray to come out and address them.

CARD wants a pledge that a significant part of the cash from player sales during the January transfer window will be reinvested in replacements.

Charlton sold winger Ricky Holmes to Sheffield United for £400,000 this week and are expected to conclude a £4million deal for defender Ezri Konsa to move to Everton before the end of the month.

Murray said in a club statement on Monday that no fees would be reinvested because Charlton are in takeover discussions.

He is one of only two Addicks directors following the departure of chief executive Katrien Meire in December. The other is owner Duchatelet, a Belgian businessman, who last attended a game in 2014.

A CARD spokesperson said: “We need to hear from Richard Murray about the club’s immediate future. He said four years ago when Duchatelet took over that he would be responsible for the relationship with the fans and that he would speak on behalf of the board when appropriate. We feel it is only fair that we should give him the opportunity to do so.

“At the weekend manager Karl Robinson promised a takeover update this week, but there was nothing new about that in Murray’s latest comments.

“Holmes has gone and Konsa is likely to follow. We don’t expect Duchatelet to put in extra funds this month, but it can’t be right that the squad is weakened with no guarantee of a takeover. It makes no sense even in terms of getting the best price for the club, because he is making Robinson’s job of securing promotion more and more difficult.

”We want a guarantee that if Konsa goes without a takeover then a significant part of the fee will be made available to Robinson to strengthen the team. We also want a timeline for takeover negotiations with clarity about whether a deal is possible or likely before the end of January. We urge all concerned fans to come and hear what Murray has to say.

“We have not staged any protests this season because we have been aware of takeover moves and did not want to do anything that might have affected a possible promotion push. The club has now damaged that prospect itself, so we are giving notice that the period of truce is over.

“We will not be organising anything inside the stadium on Saturday, but the gloves are coming off. Unless the situation is resolved, this is likely to be the start of an escalating series of lawful protests, both at The Valley and in Belgium. It’s now up to Murray to explain why that shouldn’t be the case.”