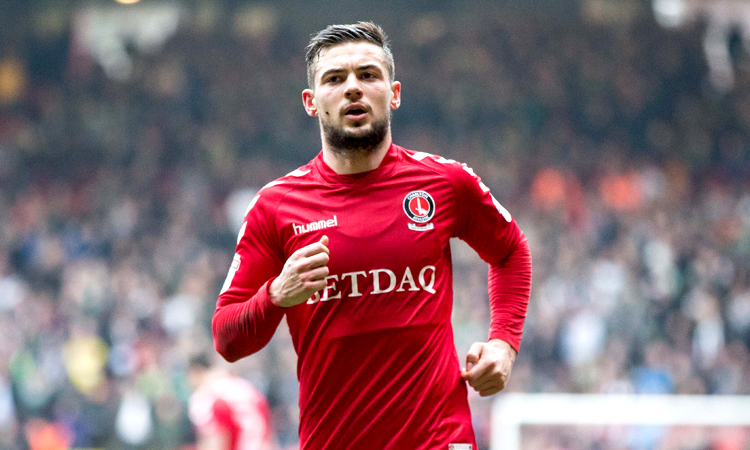 Jake Forster-Caskey has expressed his thanks to Karl Robinson – admitting he helped him find a footballing home at Charlton Athletic.

The Addicks are under the caretaker charge of Lee Bowyer after Robinson’s decision to resign last Thursday, the Liverpudlian being appointed the new Oxford United boss.

Forster-Caskey, 23, had been on loan at Rotherham United last season before Robinson moved to add him permanently to the Charlton ranks in early January 2017.

Today’s match at Northampton will be the former England under-21 international’s 50th outing for the Addicks. He had managed just seven with Rotherham before he was picked up on a free transfer.

“In football there is always change,” said Forster-Caskey. “The longer you’re in it, the more used to it you get.

“We are all pretty professional about it, but we’re all human at the same time. It’s not brilliant. But I’ve been in the game long enough to see it with managers and players, they come and go.

“He [Robinson] brought me to Charlton and I feel like I have found a home here. I thank him for that. He’s moved to a good club in Oxford, they’ve got a good fanbase. I’ve played there before and it is a  great club – hopefully he does well there.

“I did quite well as a young player coming through at Brighton, I felt like I was always progressing, and then I had a loan move at Rotherham and it all seemed to stop for one reason or another – I don’t really know why.

“He [Robinson] was the one manager to keep faith and he brought me back down south. When I was up at Rotherham I was going through a bit of a bad space, so it was nice for a manager to have confidence in me.”

Bowyer made notable changes in his first game in charge, scrapping the 4-2-3-1 formation which had been a source of frustration to fans. Not only did that see Nicky Ajose and Michal Zyro paired in attack, but also a diamond midfield to nullify some of Plymouth’s threats.

There was also a more pragmatic approach in terms of clearing danger and competing for second ball regains.

“We have been on the verge of a good performance for a long time but have let ourselves down in recent weeks,” said Forster-Caskey. “Scoring an early goal [through Lewis Page] always helps. It gets the fans behind you. The workrate from each player was outstanding, we definitely deserved to beat a good Plymouth side.

“It will give us confidence going into the next few games. We are so close and don’t want to miss out on a chance of promotion now.

“We just got after the ball a bit more aggressively and took our chances, which is vital.”

Charlton are two points behind sixth-placed Peterborough and with a game in hand.

The doom and gloom enveloping the club in the latter weeks of Robinson’s reign have been lifted by one result. So were the Addicks written off too early.

“I’m not sure on that,” responds Forster-Caskey. “Definitely inside the training ground we all feel we can get in the play-offs. We never thought that we couldn’t.

“I’m confident we have got enough in the squad to get us in the top six and the push for that starts again on Friday.”

Forster-Caskey only has another season on his contract and Robinson had spoken lately about the takeover uncertainty blocking any progression on extension talks for the former Brighton man and also exciting young winger Tariqe Fosu.

“At the moment I’m just thinking about this year and trying to win promotion,” said Forster-Caskey. “I know I have only got a year left but that is not my focus.

Forster-Caskey’s own form has been decent and he looks a contender for the club’s Player of the Year award.

“I’ve been pretty pleased with how I have done,” he said. “I always think if I’m happy off the pitch then I play better on it. I’m settled here and it is close to home. I’m happy in all aspects and feel I am showing that in my game.

“Before I got to Charlton I was going out on loan and didn’t really have stability. I have got that here and I am thriving off it.”