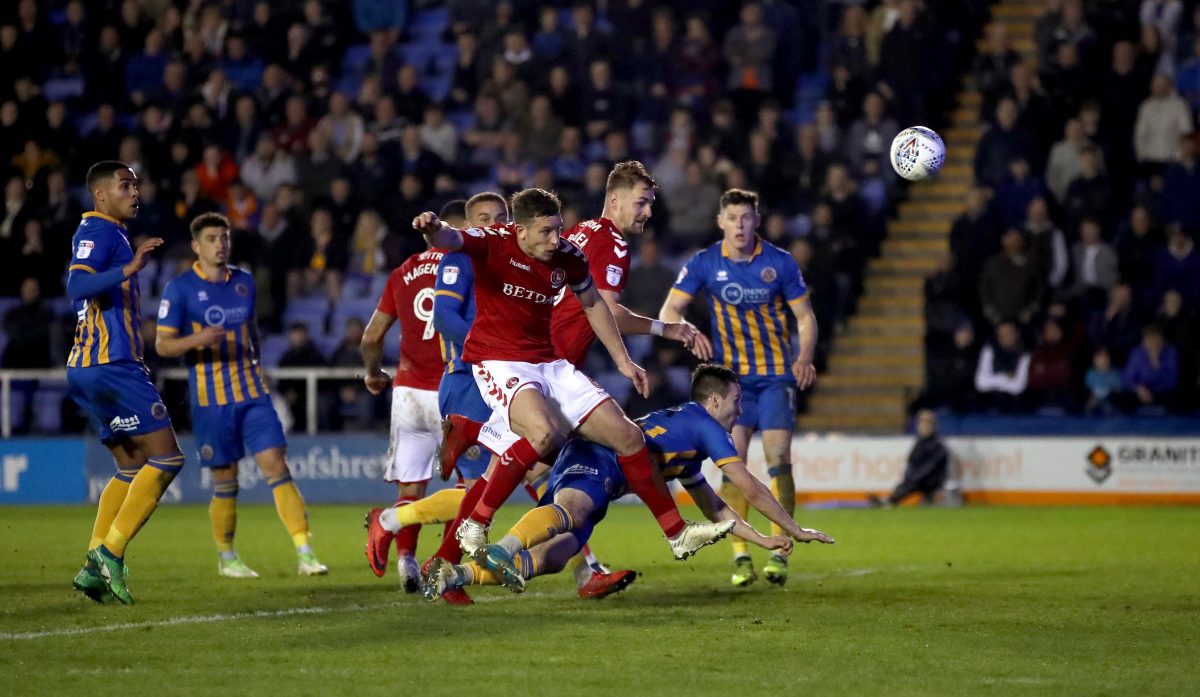 Charlton proved that they’re no pushovers during the 2-0 win over Shrewsbury Town, according to defender Jason Pearce.

Caretaker Addicks boss Lee Bowyer had challenged his side to gain three wins from their final four games of the season in order to make the League One play-offs.

The first of those came at the New Meadow on Tuesday evening, where second-half goals from Pearce and Josh Magennis earned a vital win over a Salop side whose automatic promotion hopes are now all but over.

The Shropshire outfit had out-battled the South Londoners in their 2-0 win at The Valley in February, but Pearce was determined to not let that be the case again.

“We had that in our minds,” he explained.

“That was my first game back after a long time out and I didn’t do myself justice. I wanted to try and put on the right performance that I know I can do tonight. I’m pleased for myself and the team. It was probably men against boys at home, and that’s not right at The Valley. We proved tonight that we’re no pushovers and we’ve got to keep doing that.

“We knew before the game coming up here it was going to be a tough game.

“They’ve had a little bit more rest than us. But we knew we had to put on a performance if we wanted any chance of getting into the play-offs. We’ve given ourselves a fighting chance now and we have to keep on improving. I said after the game to the boys, no messing around now. We’ve got to keep focused and go into the next game at Portsmouth, which is going to be a really tough game and try and get the three points there.

“Tonight was about the team and the club. When Bow took over, we showed what we’re about in the first three games and then we’ve been off it for two games. We’ve been disappointed as players and the fans have as well, rightly so. Tonight, we got together and really put on a proper performance. We’re delighted.

“We knew we had to win today. We said that before the game. The grit and the determination that the boys had out there showed on the pitch. We were all delighted. I want to say thanks to the fans that travelled. It’s a long way and I’m pleased that we could give them the result that they wanted.”

Pearce plundered his first goal since in exactly a year to give the Addicks a 74thminute advantage against the Shrews. It also kept up his record of scoring at least once in every season he’s featured in since 2012/13 – when he fired a blank for Leeds United.

“I tried to celebrate but my legs just gave way,” he joked.

“Jake Forster-Caskey put some great balls in today. I should have done better with the one before that was a free header and I should have hit the target. It was disappointing to miss that but delighted that one went in. I’ve been desperate. I think I’ve scored in every season I’ve played so I wanted to try and get one. I was leaving it late but it’s an important goal and I’m pleased.”