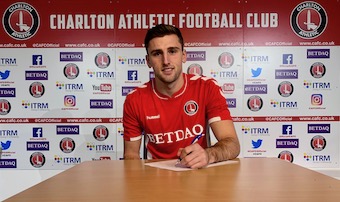 The 22-year-old had been with AFC Wimbledon for the first part of the League One season.

Purrington has been recalled by the Millers and sent straight back to another part of South London.

Charlton manager Lee Bowyer told the club’s official website: “Finally, we’ve been able to bring someone in to fill that position. We’ve been so unbalanced since we lost Pagey [Lewis Page] and Ben is a natural left-footer that will give us that width and get forward.

“I spoke to Richie Barker at Rotherham and he recommended him. He’s honest, steady and a good one-v-one defender that will bring us stability down the left. And the big positive is that he’s played every game at Wimbledon and is ready to go.” Head of recruitment Steve Gallen added: “He’s consistent. I’ve watched him quite a few times and so have our scouts. He’s got a nice left foot, he’s a big lad, so he’ll help us physically and with set-pieces in both boxes. He’s got a nice left foot, he gets forward. I think what Lee in particular liked about him is his ball retention. He keeps the ball very, very well and he’s a good steady consistent performer.”

Purrington began his career with Plymouth Argyle where he played 52 games in League Two before earning a move to Rotherham United. He played 10 games for them in the Championship and then 10 games for them last season in League One before his successful loan spell with AFC Wimbledon this season.

Purrington said: “I’m delighted to get it done and, hopefully, I can help push on in this promotion campaign. I’ve played against Charlton a few times, they play good football and have some really good players so I’m looking forward to playing here.”