With this solid, undramatic victory over fellow promotion outsiders Doncaster Rovers, Charlton stopped the rot before an actual rot set in.

Only gaining a point against Oxford United and Rochdale had at least suggested they were beginning to slide. Rot, slide, whatever you choose to call it, the Addicks called it to order.

Boosted by two early goals scored unusually at the home end, Lee Bowyer’s inconsistent side defended them competently through an uneventful second half, with Jed Steer for once reassured that the North Stand had his back.

With the notable exception of the recent Barnsley tour-de-force, which could be considered an exception proving the rule, all of Charlton’s late collapses have occurred in front of jubilant away fans. It makes sense to isolate the noisy interlopers from the action and where called upon, stand their ground in a more secure comfort zone.

Not that Charlton were put under sustained pressure by Rovers, who saw plenty of the ball but threatened only sporadically.

On the rare occasions they got behind the home defence, the visitors met a wall of determined blocks, none more crucial than the painful second-half intervention of Ben Reeves which turned Alfie May’s dangerous shot into a tame trickle barely reaching Steer’s waiting hands.

As early as the fourth minute, Steer had done his own important bit by heroically smothering Herbie Kane’s one-on-one attempt to convert Matty Blair’s incisive pass from close quarters.

Reeves justified his recall to the starting 11 with a skilful, feisty contribution until he was replaced by Mark Marshall’s unselfish graft. But it was Bowyer’s sensible restoration of Krystian Bielik to the back four which made all the difference. Played in midfield at Rochdale to accomodate Darren Pratley’s inclusion at centre-back, Bielik was withdrawn at half-time with a flea in his ear from his displeased manager. The public naming and shaming seemed unduly harsh.

An elegant mixture of skill and hardness, the Arsenal loanee showed impressive character in responding positively to Bowyer’s criticism. 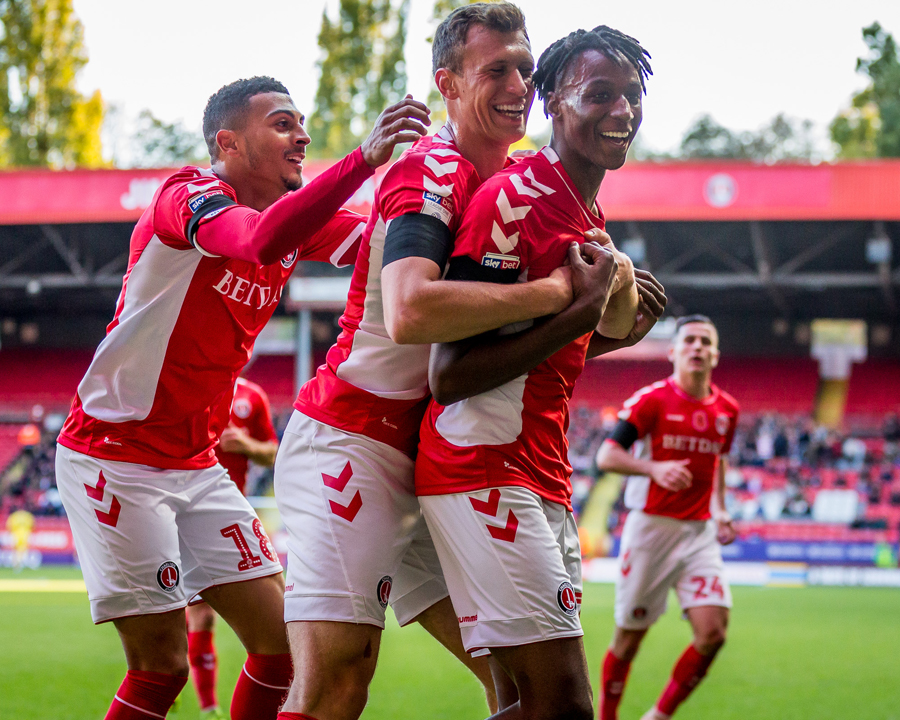 A rock of responsibility alongside dependable Jason Pearce, Bielik regularly launched counter-attacks by  carrying the ball out of defence. Always confident of his ability to dribble past opponents, he passed forward with constructive intent. From time to time, he overdoes things but he’s still a kid with time to work on his weaknesses. Against Doncaster, before an appreciative crowd, Bielik was the pick of the Addicks.

Running their Polish colleague close up front, meanwhile, was the electric combination of Lyle Taylor and Karlan Grant. The latter was a non-stop handful for Donny, with his persistence and pace down the left-hand channel.

It was from the third of three corners forced by Grant that the Addicks took the lead. Swung in by Josh Cullen and headed forcefully against the bar by Rovers’ centre-back Tom Anderson, the rebound fell conveniently for Joe Aribo to thread the opener through the goal-line chaos.

Picked out by Reeves’s crossfield pass near the left touchline, Taylor made use of Chris Solly’s overlapping distraction to step inside and find space for a deliciously floated right-footed cross to the far post. Peeling away from ballwatching marker Danny Andrew, Grant squeezed a far from convincing header off Marko Marosi’s hands but into the net off the woodwork.

Unrecognisable as the frequently frustrating tyro farmed out on loan to Crawley last season.

Grant’s continuing good health will be key to Charlton’s promotion hopes, with Taylor showing worrying signs of wear and tear next to him.

On that note, the completion of 90 minutes by combative Jamie Ward was encouraging, as was the inexhaustible energy shown by Cullen, who was denied his first goal for the club when his free-kick smacked the post in first-half added time.

The lasting impact of this potentially pivotal win will depend on the outcome of the Addicks’ game in hand at Walsall this evening.

A loss at Banks’s Stadium would continue the infuriating inconsistency – what Marc Bolan called “dirtysweet” – which has undermined their topsy-turvy season so far.

It wouldn’t do to embark on yet another rot, slide or decline, however it’s described.

“The time to hesitate is through”, as Jim Morrison, another doomed troubadour, warned. Let’s face it, who wants to “wallow in the mire” of League One a moment more than is necessary?